Heading to Dubai and wondering about what NOT to do in Dubai? This is a very legitimate question since there are quite a few don´ts in Dubai – if you do not want any troubles when visiting the city, so it is essential you know what not to do in Dubai.

While Dubai is not as conservative as many other Arabic cities, there are still a few things you should NOT do in Dubai. At least, if you don’t want to get into trouble or show disrespect.

After visiting Dubai many times, I am pretty familiar with the rules. Still, whenever I visit a new place, I try to inform myself about the vital do´s and don´ts of the destination – for one, because it is about showing respect. However, in Dubai, it is also because I don’t want to end up in prison.

Let´s be honest: Prison in Dubai is probably not fun, and the “prison thing” could happen quite quickly in the United Arab Emirates (a few examples follow in the text).

Okay, maybe you will not be thrown into prison straight away for more minor offenses, but the security and police might be there quite fast. And we don’t want to experience that.

The strict rules sometimes help me feel safer as a solo female traveler (e.g., less alcohol), but there are a few things that worry me a bit.

Whether it is to show respect or because you want to avoid the police in Dubai: here are my tips on WHAT NOT TO DO IN DUBAI. P.s. many things are officially not allowed, but people still do it anyway, and though it is a common practice, you should be at least aware that it is not allowed).

P.S. Very apparent don´ts, like stealing and other crimes, are not mentioned here, but of course, they apply. 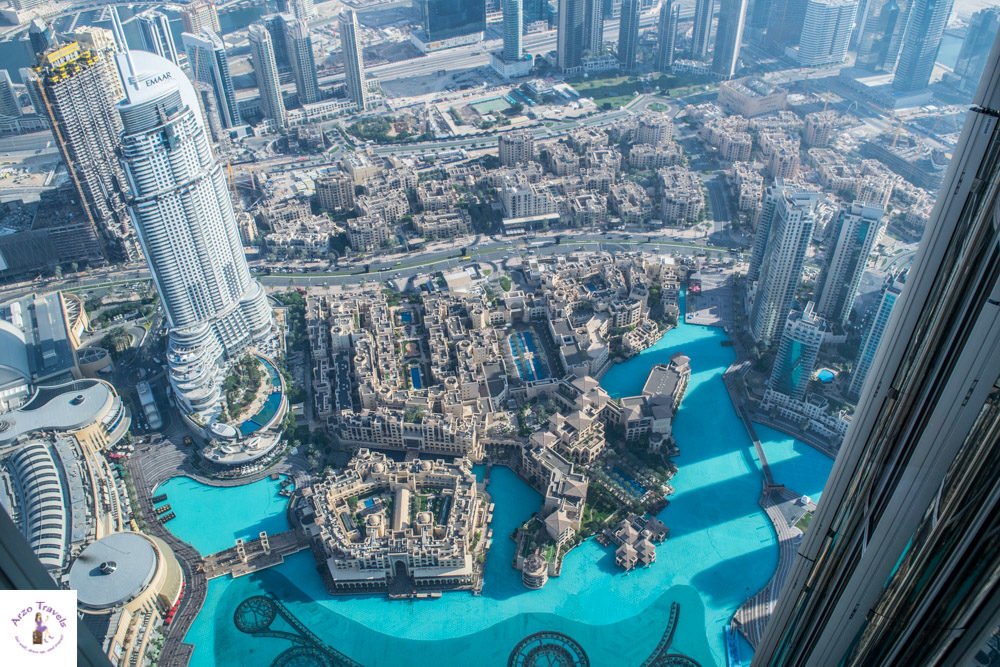 So, here they are – the essential things to do in Dubai

Alcohol is not forbidden in Dubai (unlike Sharjah, which is next to Dubai), and you can buy it in certified bars, clubs, restaurants, etc.

However, not all restaurants serve alcohol, and you should not take your bottle or can of beer from your mini-bar and have it on the street or other places that aren’t selling and serving alcohol.

Forbidden – if you are gay, don’t say it and don’t show it. It can get you in real trouble (including ending up in prison), so your partner is just a good friend during your Dubai trip.

If you are a solo female traveler, don’t book accommodations in Dubai Deira – Dubai’s old town. I love strolling the area in the daytime, but it is intense. You get stares, and people constantly try to sell you something. 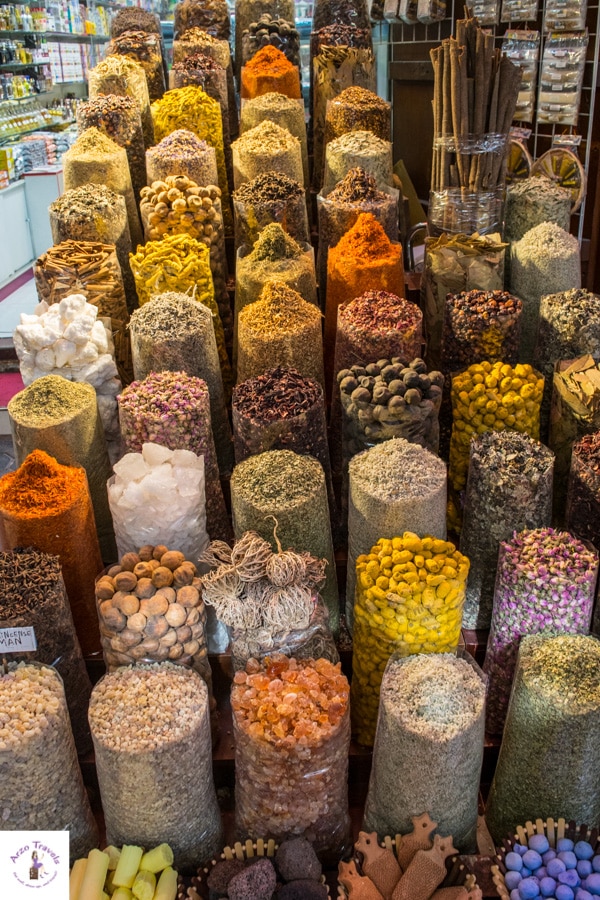 Shares
I feel safe during the day, but I definitely don’t recommend staying there as a solo female traveler. Even though this area is one of the cheapest, please avoid side streets and small hotels if you want to feel safe.

P.S. Dubai is extremely safe, and you will most likely be safe in Deira as a female, too, but it is just not the best experience – believe me, I have done it and say this from my own experience.

Here are places I recommend to stay in Dubai – the best neighborhoods and the best hotels for each budget.

Cursing and swearing in Dubai is not allowed – so while you would like to curse the crazy driver in front of you out loud, better to keep it in your thoughts. Cursing the ruling family is as forbidden as cursing in general. 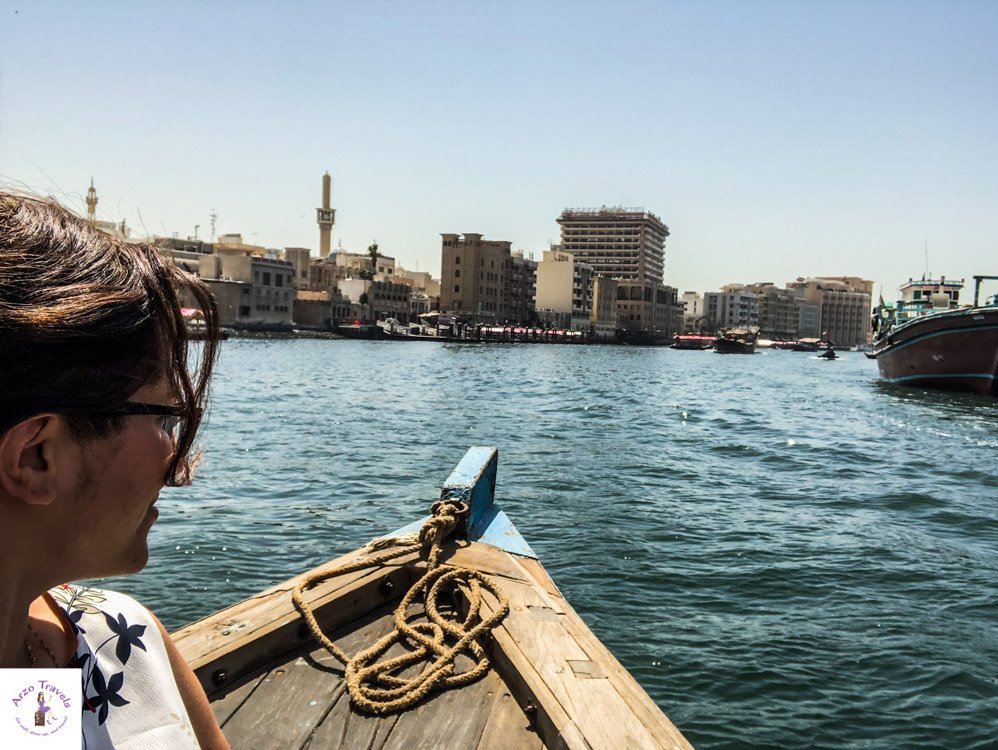 Before marriage? Not allowed. Sex before marriage is actually illegal – even for non-Muslims and foreigners. Unfortunately, a woman ended up in prison after she reported a rape, which is very upsetting. It is terrible to see people being imprisoned for years because of reporting a crime that involved an activity that isn’t allowed in Dubai.

Oh, we all see couples holding hands and even kissing in public on Instagram… often, these are influencers who are looking to promote Dubai and who were invited by the tourism board. Truth be told: just because they are allowed to do it doesn’t mean you are.

Actually, you can get in real trouble if you show affection in public: no kissing and no cuddling for us regular people.

P.S. This, of course, does not mean you cannot hug or cuddle your kids. It just pertains to your spouse (or supposed spouse). 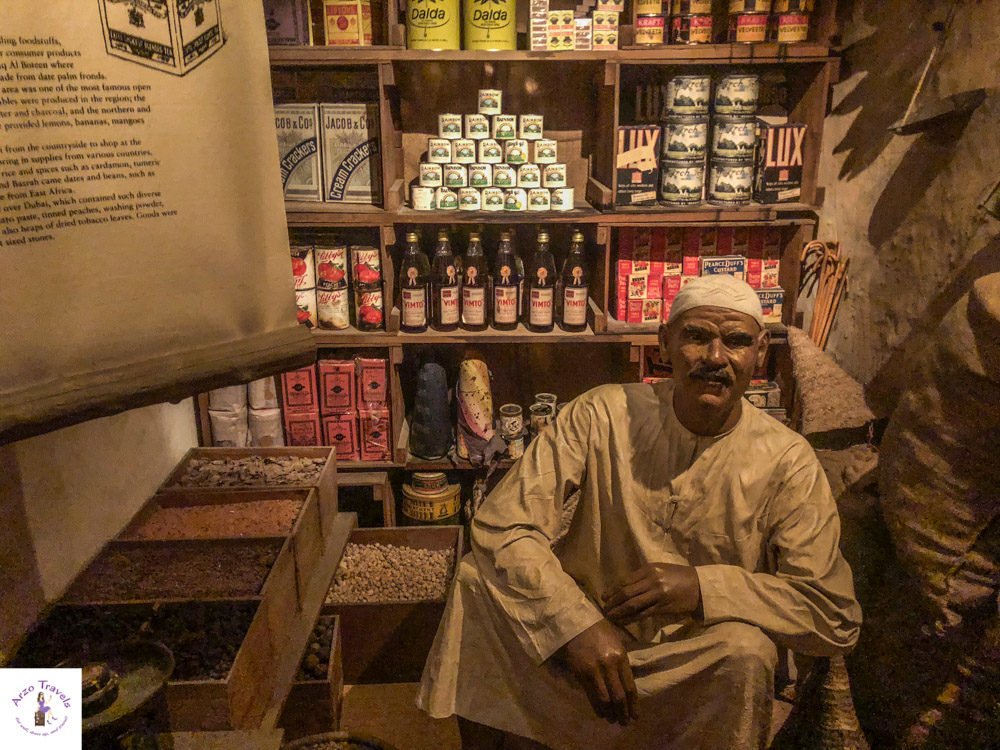 We know that Arabs are actually really lively and enjoy dancing and good music. However, dancing in public is not allowed (apart from clubs, etc.). So, when you hear some nice loud music from a restaurant, don’t get up to show your great dance moves – keep those for your hotel room or the bar-

I cannot help it, my shoulders start moving, even in Dubai, when I hear a great song, and I do not make myself freeze, but I try to control and stop myself from twirling and wild dance moves.

Nobody wants to listen to me sing, so I have stopped singing out loud – at least in front of others. This gives me a natural advantage because I will not get in trouble for singing in public.

So, as pretty as your voice is, keep it low. Also, avoid loud discussions with others.

There are bars, restaurants, and other venues where music is played – so you don’t have to live entirely without music. If you watch the water dancing show, you will hear music, and that is fine, too. It is not per se forbidden, and enjoy it whenever you hear it in Dubai.

However, don’t take out your phone and turn on the music so that people around you can hear it. Save your dancing, singing, and music-listening for a trip to another part of the world. 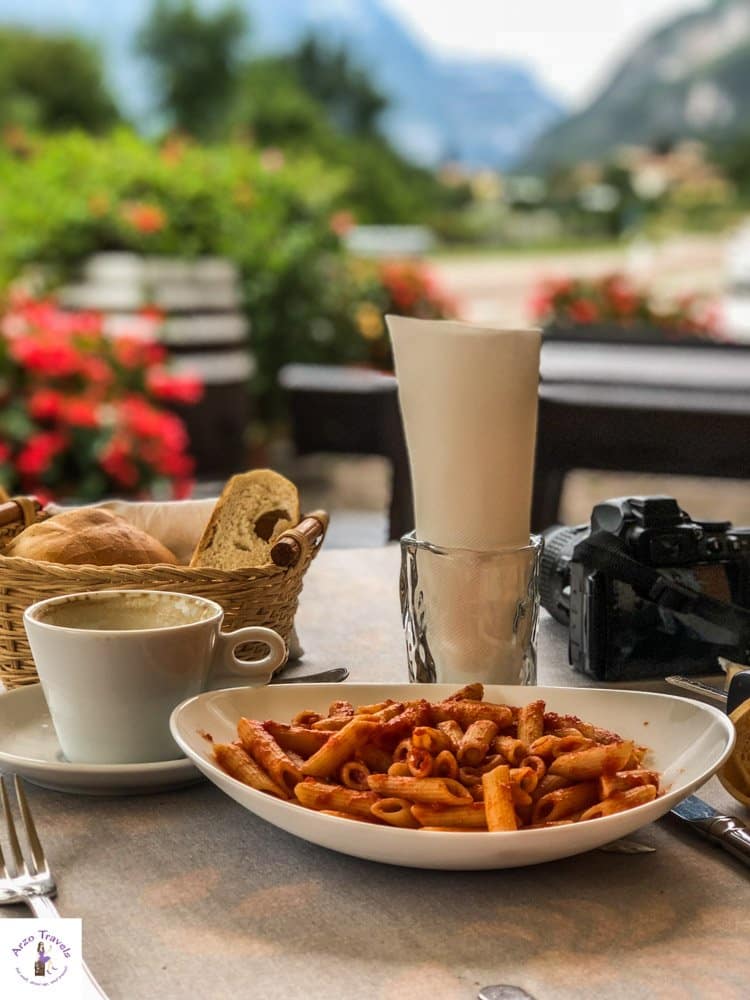 During Ramadan, a time when Muslims fast from sunrise to sunset, life gets more challenging. If you visit Dubai during Ramadan (which lasts about four weeks), you don’t have to fast, too, but you are expected to show respect and not drink (even water) or eat in public during that time.

Dubai has some strict laws on drugs. So, this is not the perfect place if you enjoy occasional joint or harder drugs. Punishment can be severe, so make sure you empty your bags of any medicines that could cause problems.

If you are on medication, double-check if you can take that medication into Dubai.

Surprise, surprise. Don’t bring your magazines, DVDs, or anything of this sort with you to Dubai. Of course, all these things do exist in Dubai, and people have access to them, but don’t risk your neck by bringing anything that might get you into big trouble.

You can wear bikinis at the beach, and you can wear shorts and tops. However, here again, don’t necessarily wear what the Instagrammers wear. Most of the time, they disrespect local dress codes. 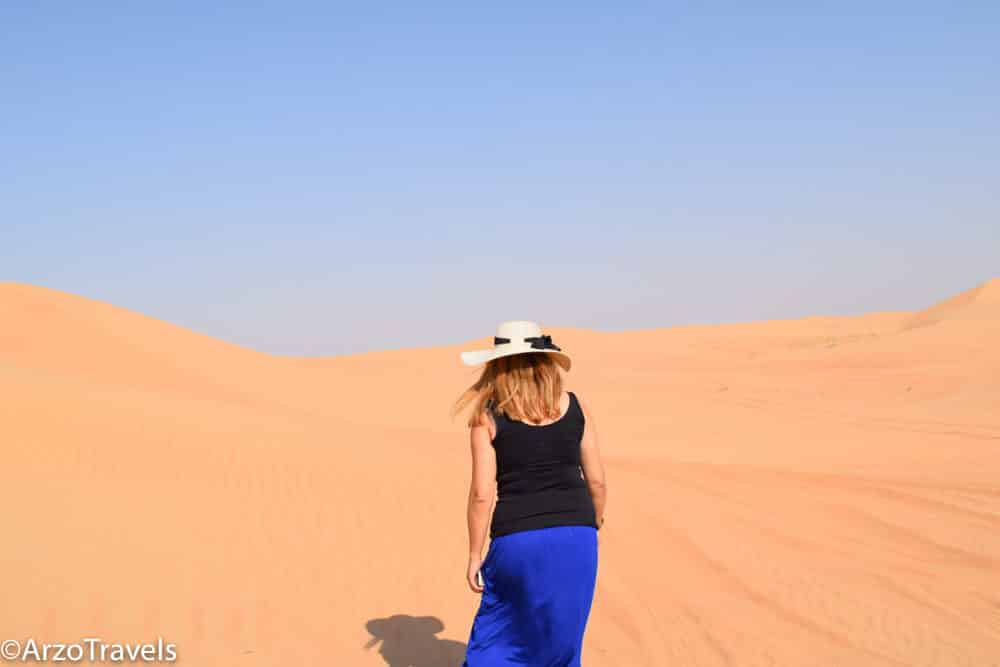 Some nations do care less about dress codes (anyone in Dubai probably knows which two nations they are) but don’t be one of them. I even heard from a local that security guards have actually asked people to leave malls or to change clothes and many locals are quite annoyed by the way tourists (and expats) dress.

I am also wearing skirts that do not cover my knees in Dubai but try not to reveal too much skin at once.

Check out my post on what to wear in Dubai here.

You can buy and eat fish, but don’t bring fish with you on the metro. It is not allowed – for excellent reasons. While talking about the metro, you cannot eat or drink in the metro (and for sure not eat fish in the metro). 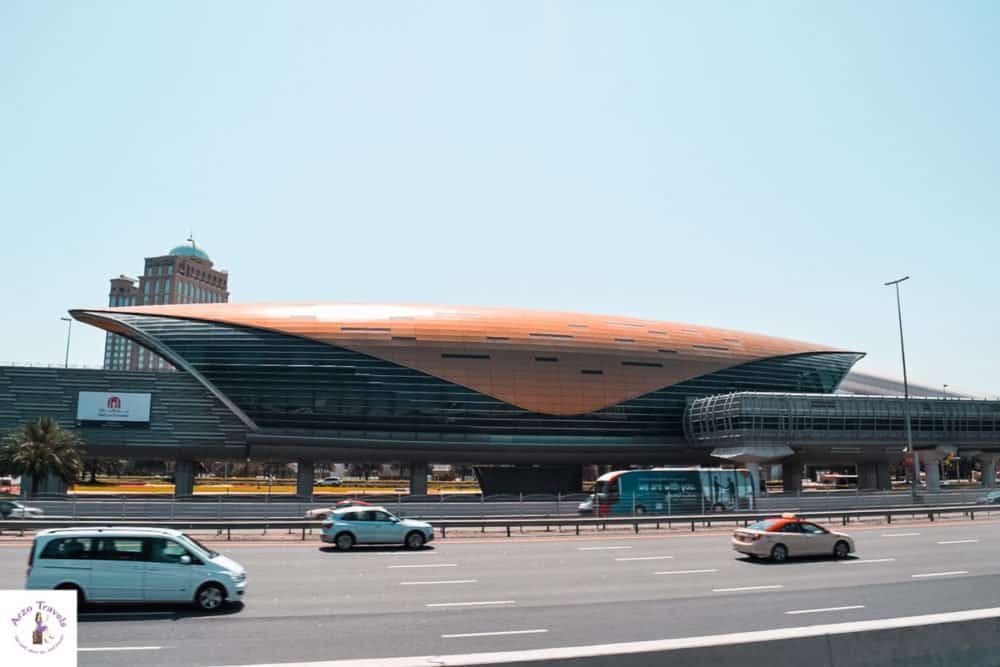 As a man, do not enter the women‘s compartment on the metro. There are sections for females and children only, and they are marked in pink. Men can be fined if they are standing or sitting in the wrong compartment.

However, I – as a solo female traveler – feel super safe in Dubai.

If you enjoy the heat, visit in the summer months (April to October), but I seriously suggest not visiting during these months. It will be warm and even hot in the winter and unbearably hot in the summer.

Okay, this might even be weirder than some of the other rules, but I thought I should add it as this is a very new topic. The last Asian Cup took place in the UAE, and people cheering for the Qatar football team (at the Asian Cup) were punished (not sure what the punishment meant as it was not very transparent).

With the political crises still going on, do not openly display your admiration for the country (though I am not sure what to admire there, well but anyhow) as you might have to face consequences you do not want to face.

FINAL THOUGHT ON THINGS NOT TO DO IN DUBAI

Okay, that sounds like many “don´ts” – some of them are quite obvious because you will visit an Islamic country, and some are just showing courtesy. However, while it may sound like Dubai isn’t fun, you can still have an amazing time – follow these few rules and be aware of the things not to do in Dubai, and you will be fine!

So, after all, the don´ts in Dubai, it is time to find out about the do´s.

Fnd out about my favorite things to do in Dubai here. 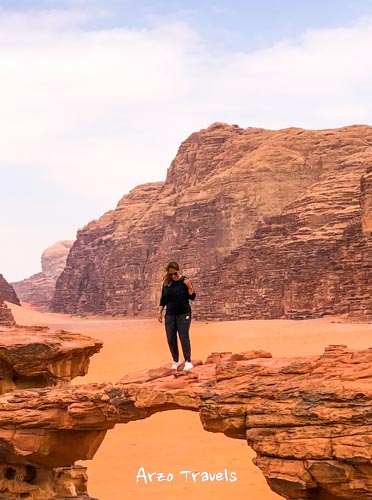