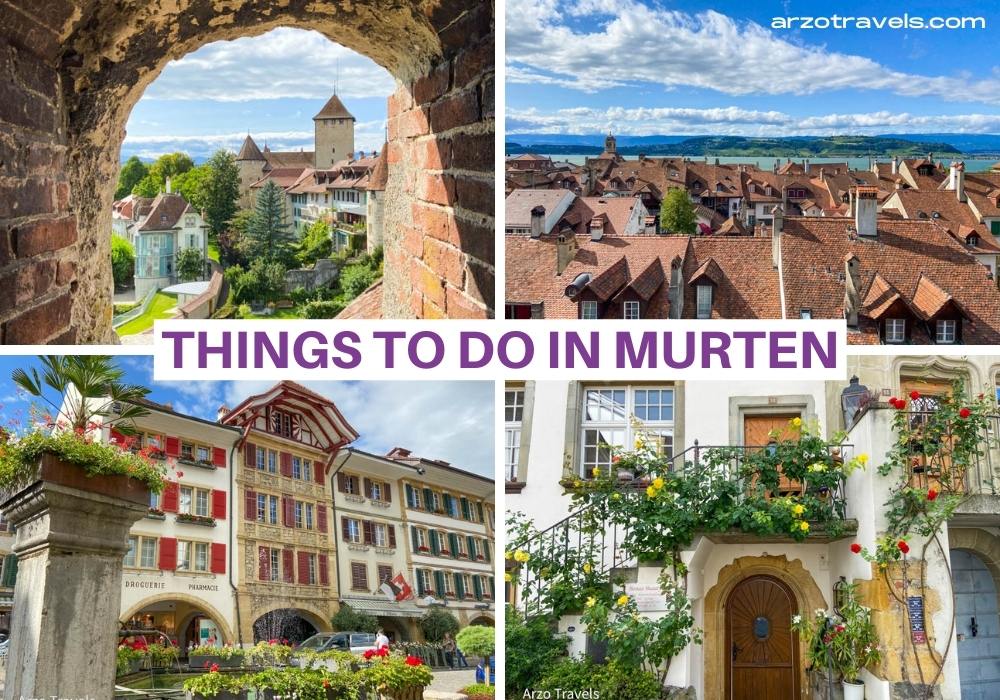 WHAT TO DO IN MURTEN + TRAVEL TIPS

One of the most beautiful towns in Switzerland, if not THE most beautiful, is Murten. This medieval town, sitting on a hill above Lake Murten, is just stunning. Seriously, Murten is the definition of stunning.
I have seen my fair share of towns and villages in Switzerland – Murten is in my top 3 of gorgeous towns in the country. And if you are wondering about the best things to do in Murten, then this post is for you. Though Murten is not rich in attractions or sights in itself, it is definitely worth a visit.

Thus, I am sharing my tips on what to do in Murten plus some quick travel tips. 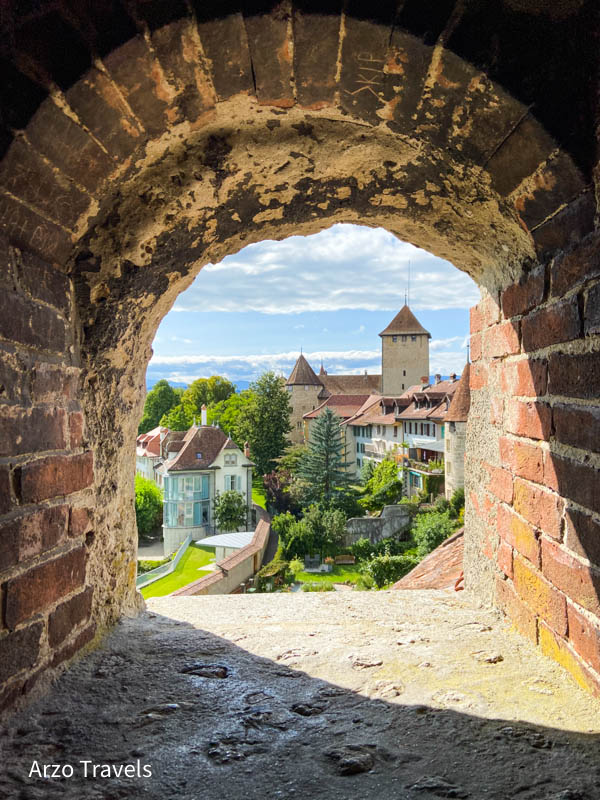 Shares
Disclaimer: This post contains affiliate links. This means I might earn a small commission when you buy a product (at no extra cost to you) after clicking on my link. More about it here.

Here are some quick travel tips for your trip. WHERE TO STAY IN MURTEN If you want to stay overnight in Murten (though I have never done so, I hope to do so myself soon) you might want to check out the following accommodations in Murten.

TOP THINGS TO DO IN MURTEN IN ONE DAY +

Okay, let´s start with what to do in Murten.

The very best thing to do in Murten is to walk the town’s rampart walls. 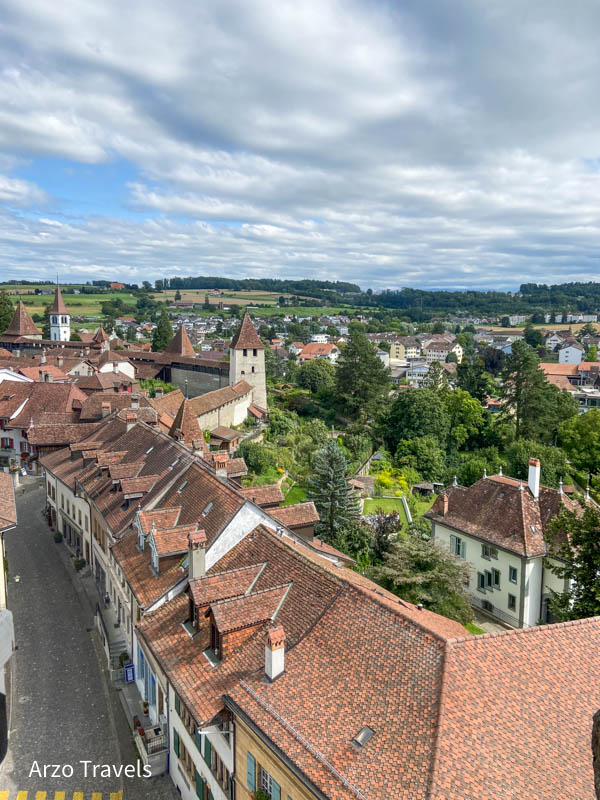 Shares
They were built in several stages and from a variety of materials such as gravel, tuff, and sandstone. The lower 15 layers of stone date from before the town’s construction (12th century). Documents state, that King Conrad IV requested his citizens to build a wall around the city. In return, King Conrad issued a 4-year tax exemption to all citizens. 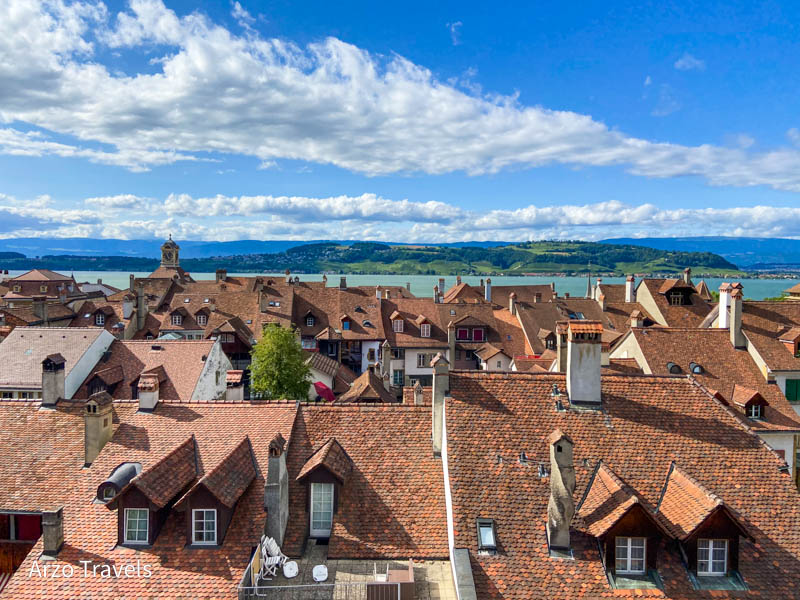 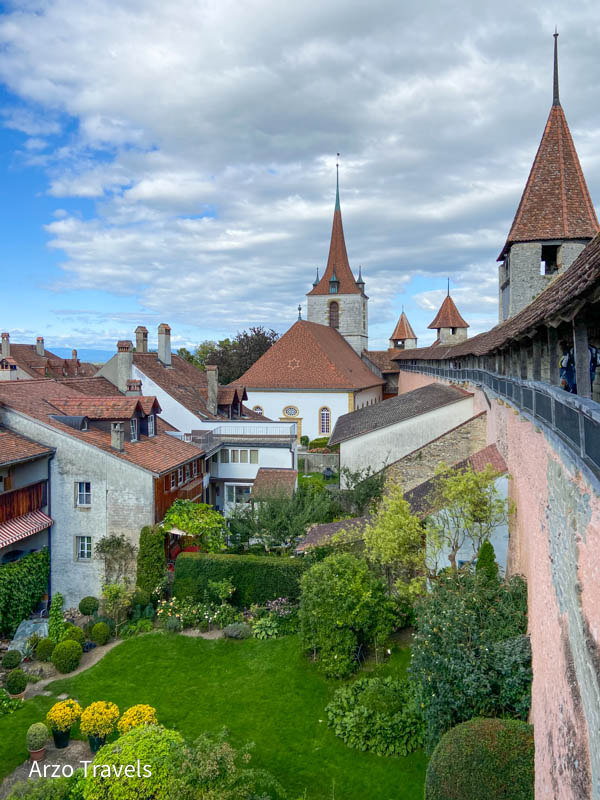 Shares
The views from there of LakeMurten and the old town are splendid. You have to climb a few steps but it is nothing strenuous.

You might be surprised, or maybe not, to find out about a castle in Murten. Actually, it will be the first attraction you come across when you get from the train station to the old town. 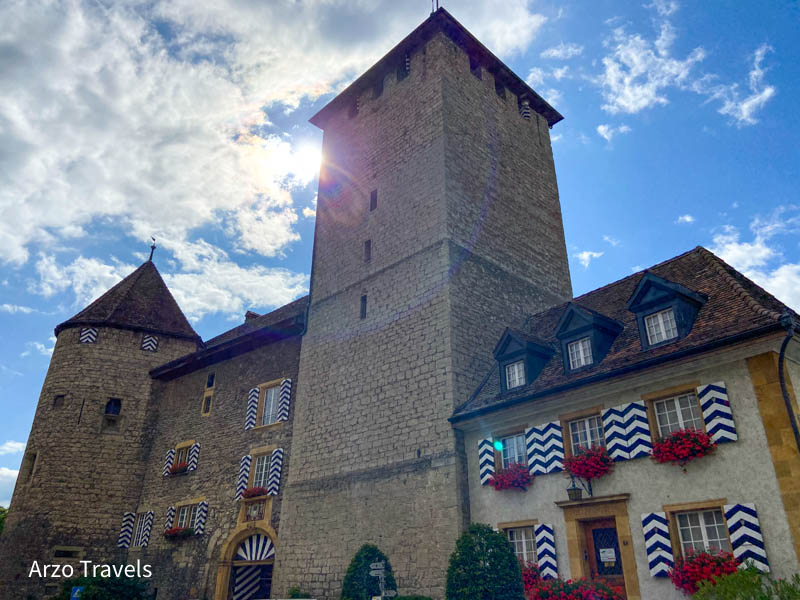 Shares
The Murten Castle dates back to the 13th century, though today’s castle is from the 18th century.
It served as a residence to the bailiffs from Bern and Fribourg. Throughout history, it also served as a hospital, prison, and barracks. Today it houses the Canton of Fribourg’s Prefecture of the Lake District. 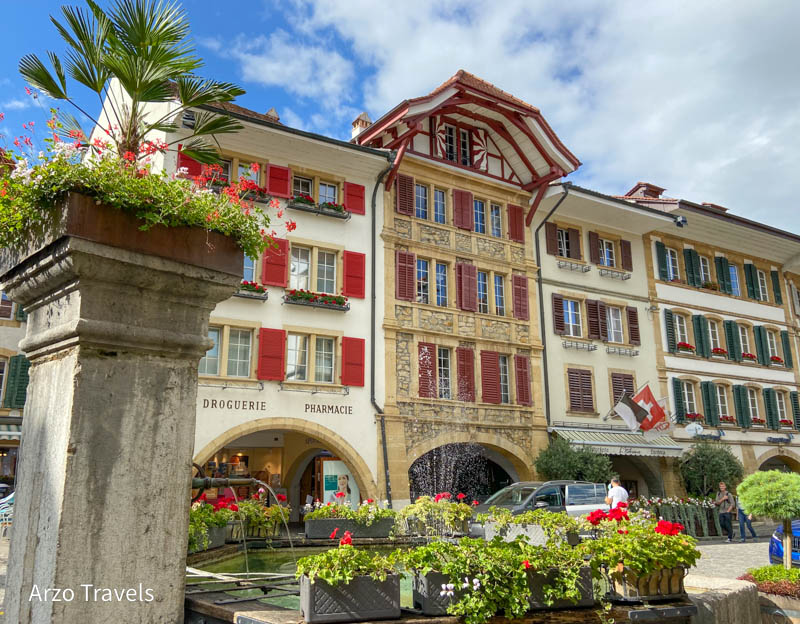 Shares
Traditional and colorful – this is what you get with these buildings. The flower pots are just the icing on the cake. 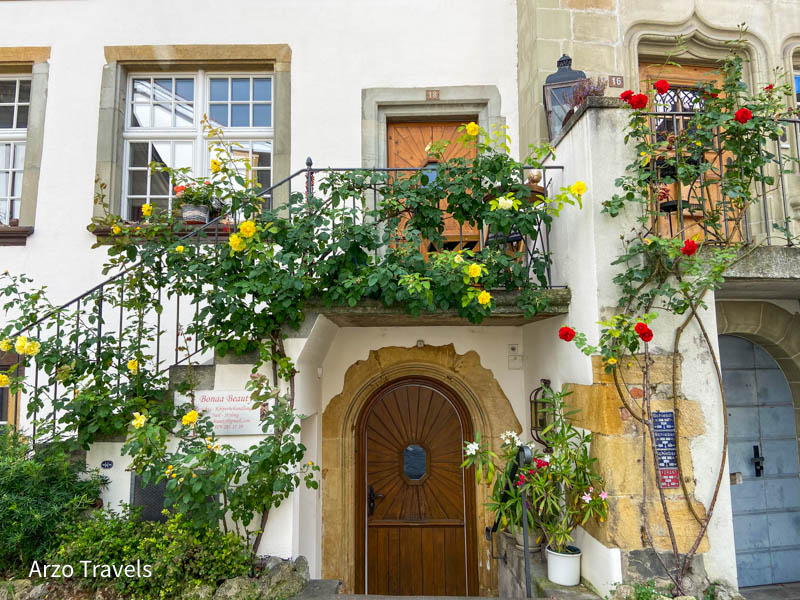 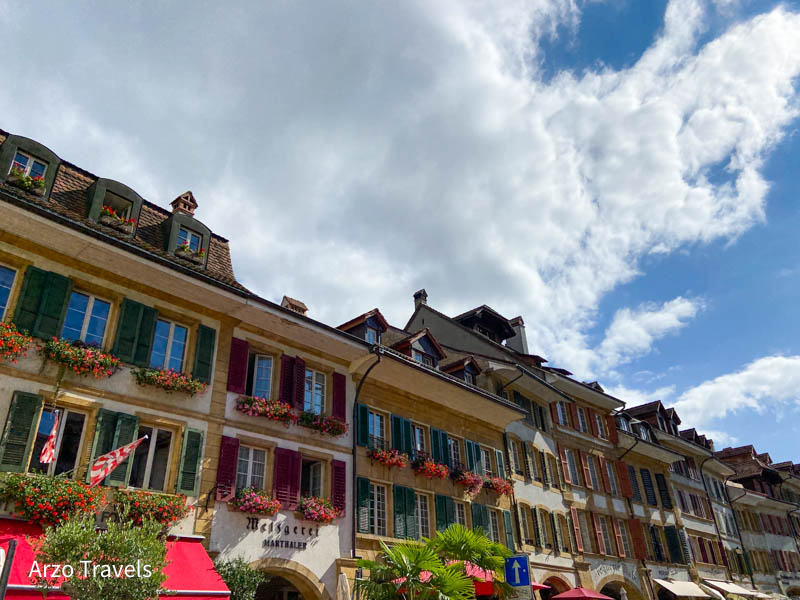 Shares
Founded eight centuries ago by the Dukes of Zähringen, some buildings date back to the 16th century. The main street (Hauptgasse / Grand Rue) is full of these charming buildings, but you will find many more in the little side streets, along with cute cafes and boutique shops. Also, keep an eye out for the vaulted arcades. 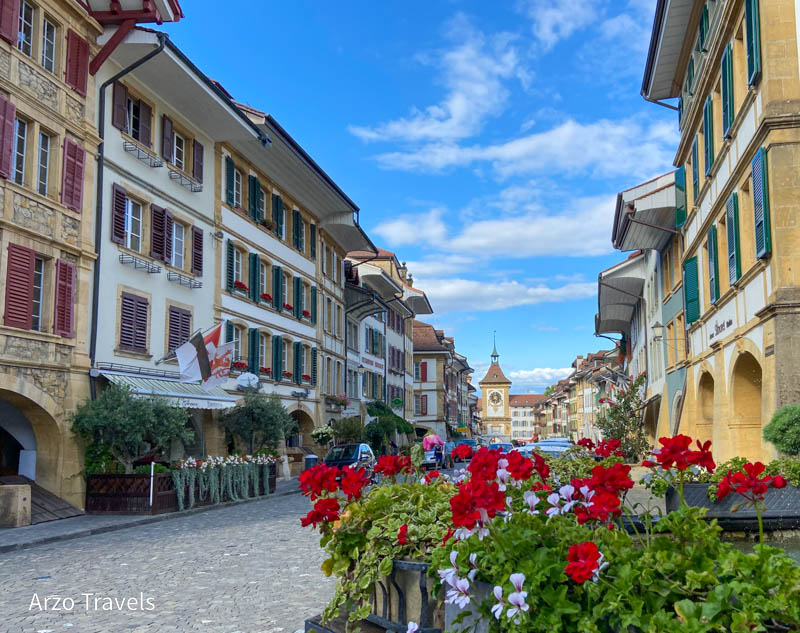 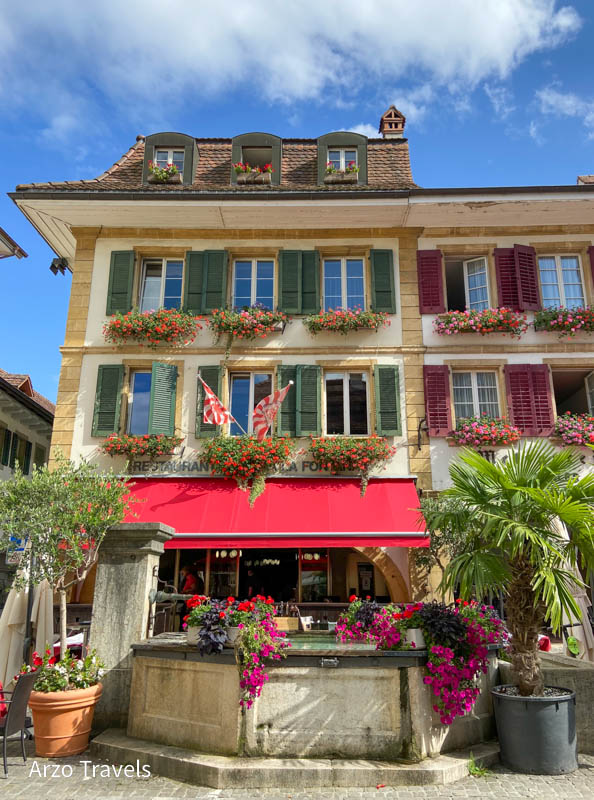 Shares
You will notice many unique fountains throughout the town – they are not only pretty, but you can also refill your water bottles with fresh water. 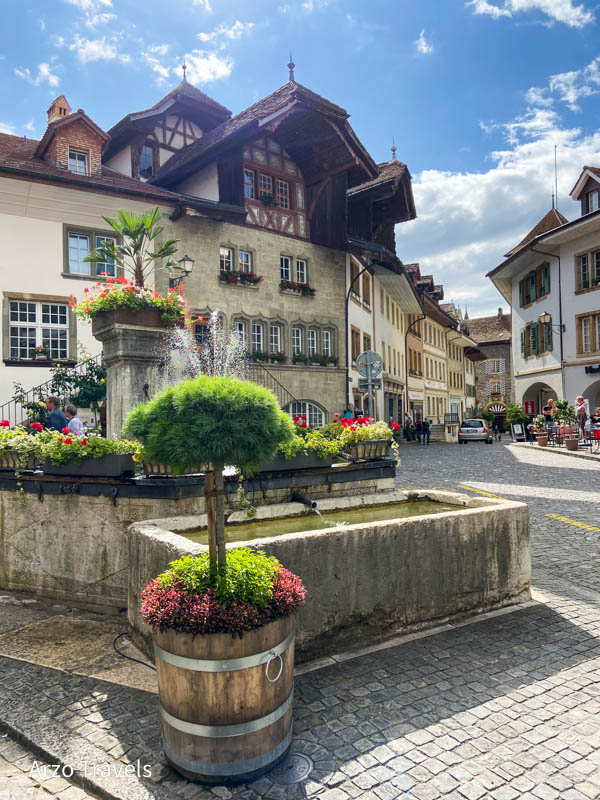 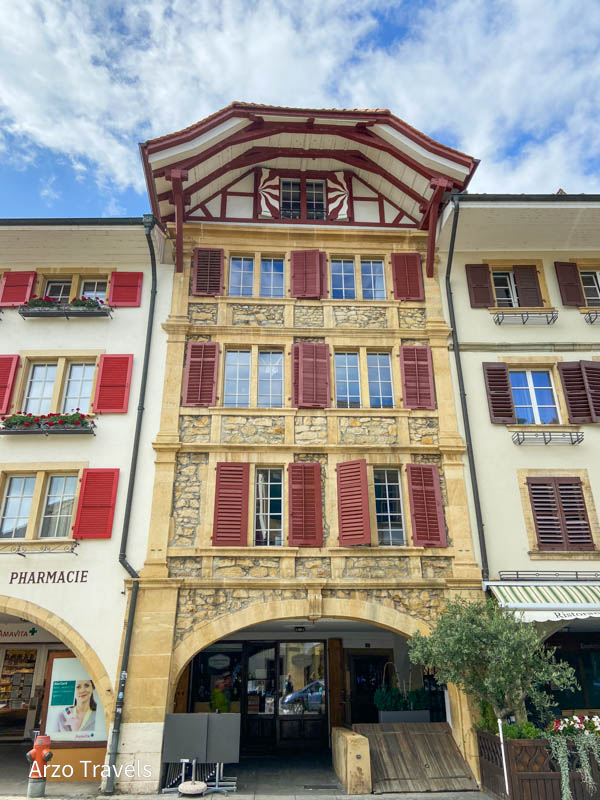 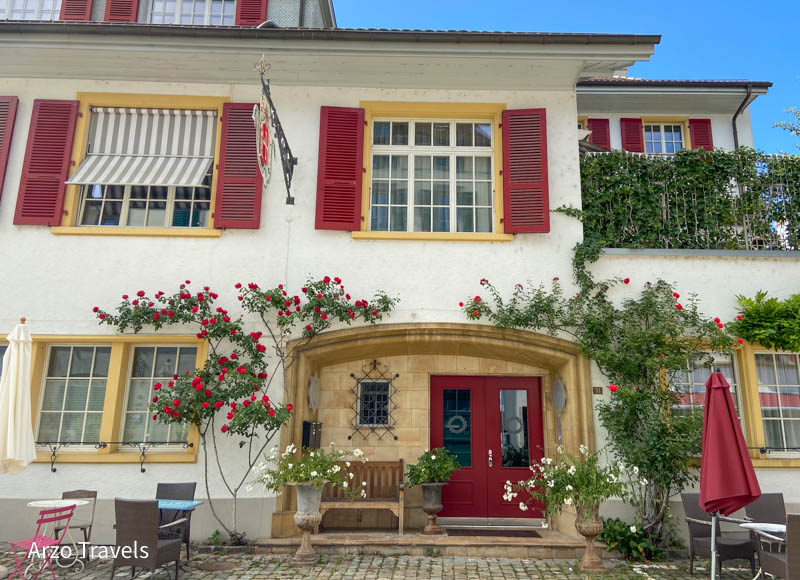 Shares
Look at this police station (Polizeiposten) – is it not pretty? 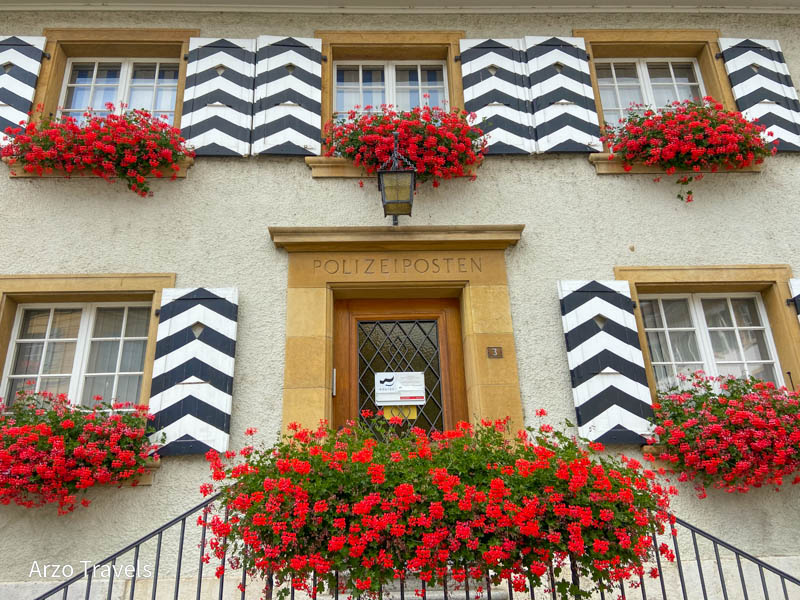 Shares
Though there are many buildings that will attract your attention, also look out for the town hall (Rathaus). It was rebuilt after the city fire in the 15th century and later it was renovated and enlarged. But the baroque tower and clock were added only in 1816. 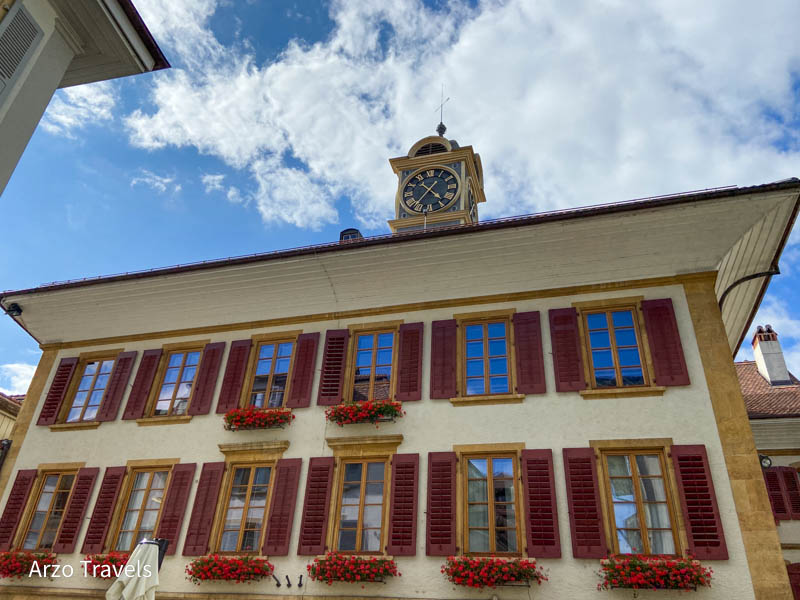 Shares
The ground floor was formerly used as a storage area and arsenal and these days it is used as a reception hall. Fun fact: Neon-lit signs are not allowed – this way, the charm of this gorgeous old town can be preserved.

Another attraction is the Berntor. It was first mentioned in history in the 13th-century and was completely destroyed in the 15th century. 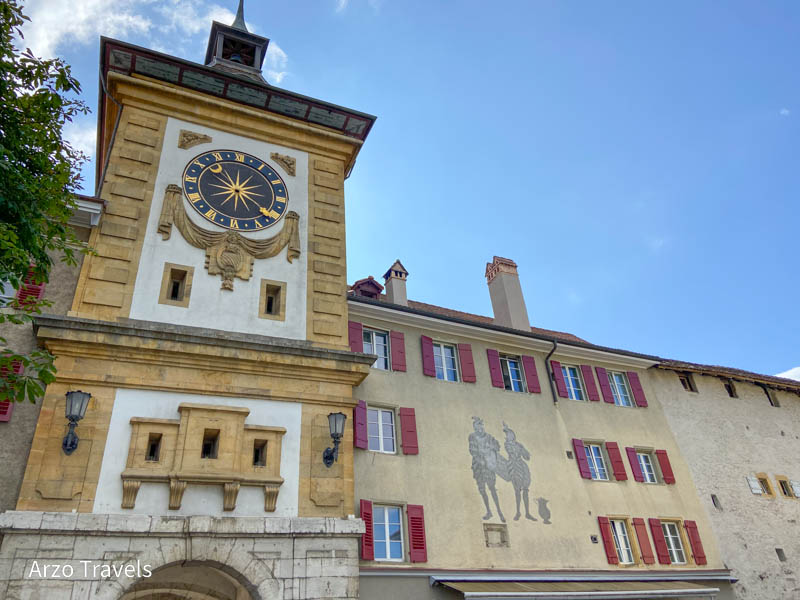 Shares
Over the years, it had been rebuilt several times and today’s Berntor dates from the second half of the 18th century. If you have been to Bern you might see the resemblance to the “Zytglogge” Tower in Bern – that is because they were built by the same architect, Niklaus Hebler. 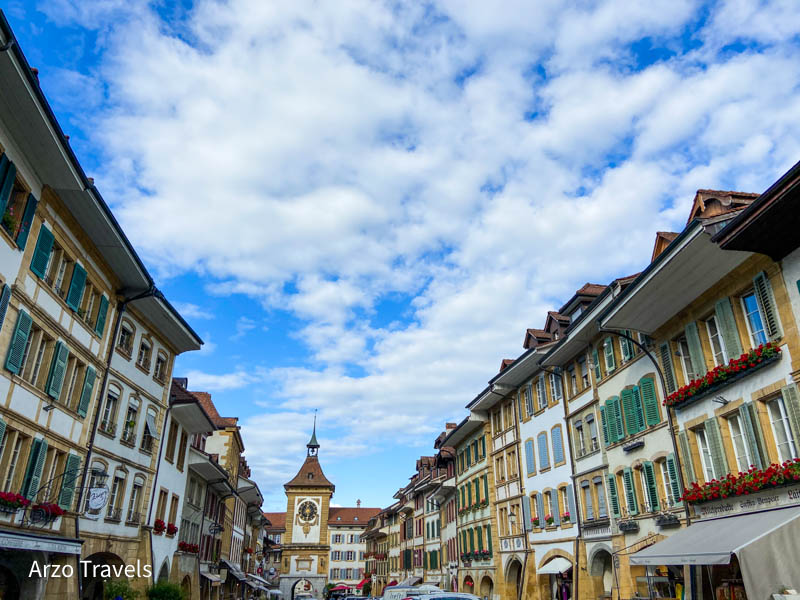 Shares
The clock, high above on the Bern Gate, dates back to the 18th century and is still wound every day. Three heavily weighted stones, probably cannonballs from the Battle of Murten, are raised by hand cranking every 24 hours.

Murten is located on the south-eastern shores of Lake Murten, which is also known as Murtensee in German or Lac de Morat in French. 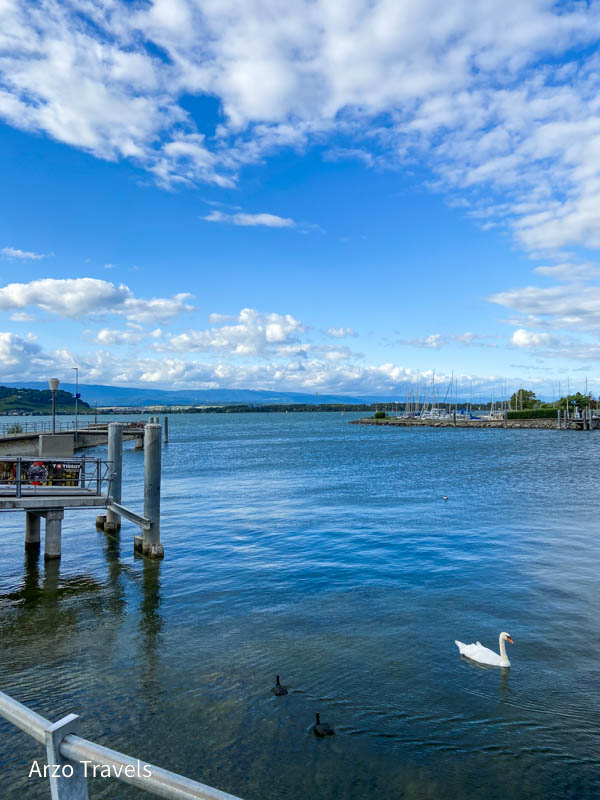 Shares
As you might know, I am a lake chaser. And the unofficial reason I adore Switzerland are the many, many breathtaking lakes. And guess what? Murten has also its own pretty lake. Yes, it is not as big in size as Lake Geneva, nor does it have a unique color like Lake Brienz, but rest assured: Lake Murten is a wonderful place to visit. 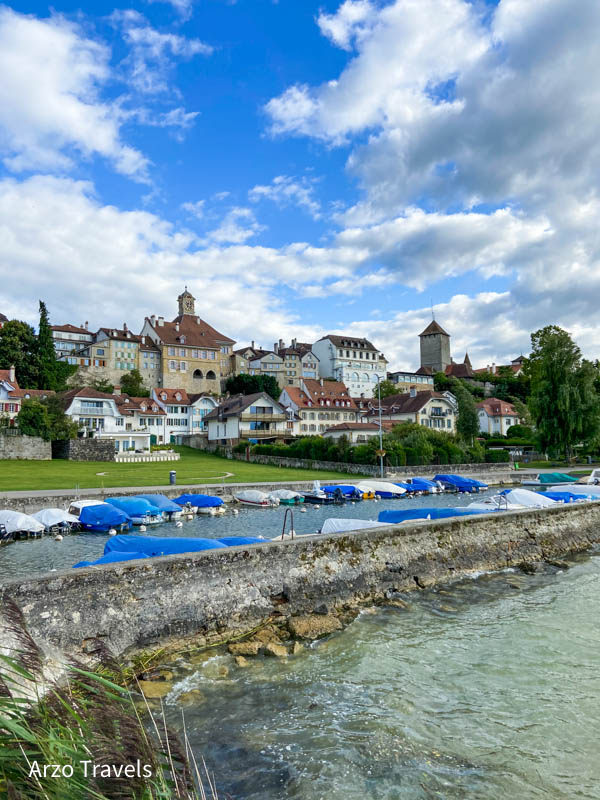 Shares
Because of its shallow depth, Lake Murten warms up quickly by the sun which makes it perfect for swimming (you do not want to jump into the cold glacier lakes you have in other parts of Switzerland). However, it is not only for the water sport enthusiasts: You can also do a boat cruise on Lake Murten which takes about an hour. There is even the option to get to Neuchatel through the Broye canal which takes just under two hours. But apart from all that: you can also just look at it and walk along its shores or rest at the meadow in front of the lake. Boat cruises are free with a Swiss Travel Pass

The Murten Museum is one of the oldest in the canton of Fribourg. Since 1978, it is located in the former mill, just outside the rampart walls. 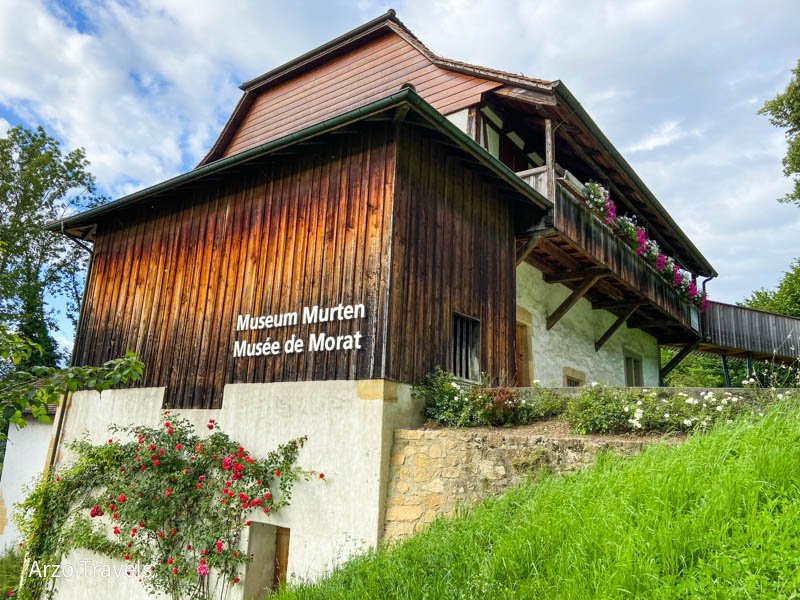 Shares
The permanent collection illustrates 6,000 years of Murten’s history, as well as that of the surrounding area. There are also temporary exhibitions on display each year.

I would not call the churches in Murten, must-see attractions but you might still want to check them out. Also, you will come across them almost naturally, as they are conveniently located in the old town. From the rampart walls, you will see the German Church. 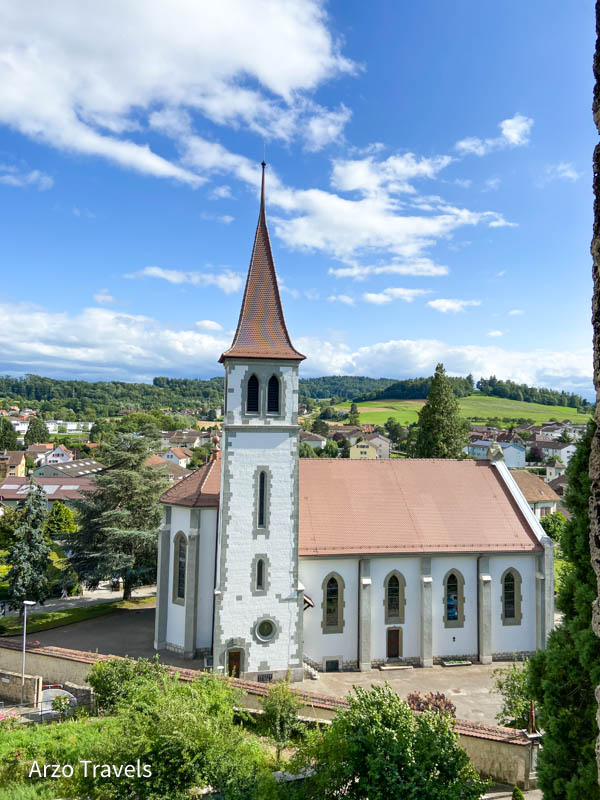 Shares
According to records, a chapel existed here since the last 14th century and was rebuilt in the 18th century in the Baroque style. The old chapel has been preserved in the choir section. Another church you might want to visit is the French Church which was built in the late- Gothic style in the 15th century. It replaced the earlier chapel dedicated to St. Catherine. 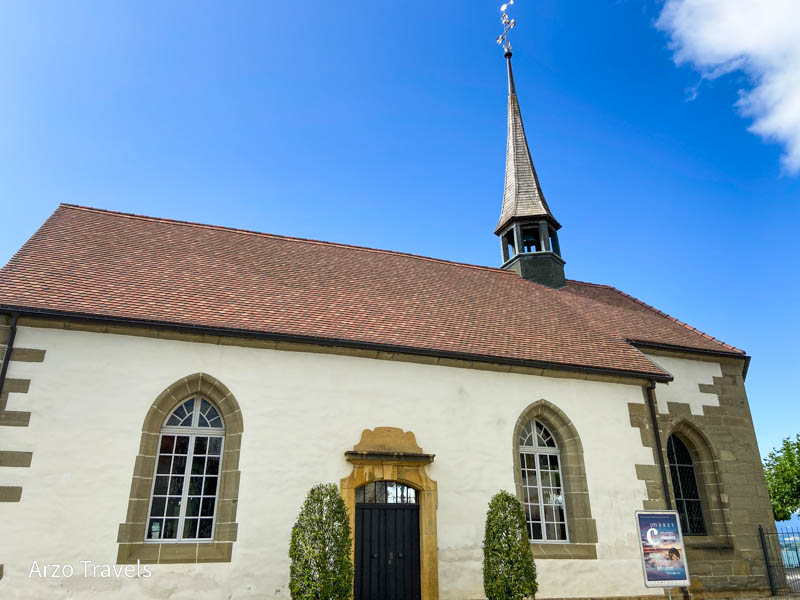 Murten is an exceptionally pretty town – maybe the prettiest of all towns in Switzerland. If you were still wondering if it is worth visiting, hopefully, these pictures and images have a) convinced you it is well worth it, and b) informed you about the best things to do and see. Enjoy your trip to this wonderful little place! P.S. Since I mentioned that the unofficial reason for my Switzerland-obsession are the lakes, you might be wondering about the official reason. Well, of course, it is the mountains. The mountains! You might have guessed already! Check out some of my favorite mountain peaks in Switzerland here. READ MORE: