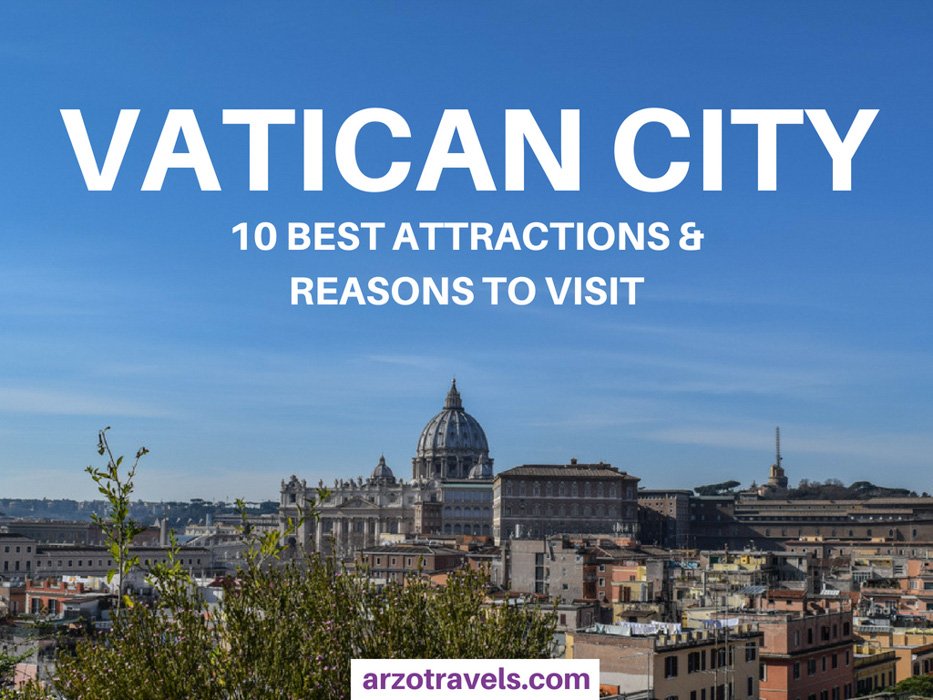 WHAT TO DO IN 1 DAY IN VATICAN CITY

Are you planning your trip to Vatican City and are wondering about the best things to do in Vatican City in one day? Then read on and find out what to do.

In 1929 the Vatican became an independent state – it is the world’s smallest with only 0.44 square kilometers and 1000 inhabitants and it is listed as a UNESCO World Heritage Site. This tiny county has always fascinated me and I couldn’t wait to finally visit. Whenever I travel, I love to visit religious sites like mosques, churches, and temples – though I am not a religious person. When I visited I wasn’t disappointed at all – actually, a trip to Vatican City was the highlight of my 3-day trip to Rome and is a must for any Italy itinerary. It is the perfect trip from Rome – Vatican City in one day allows you to see the best attractions. 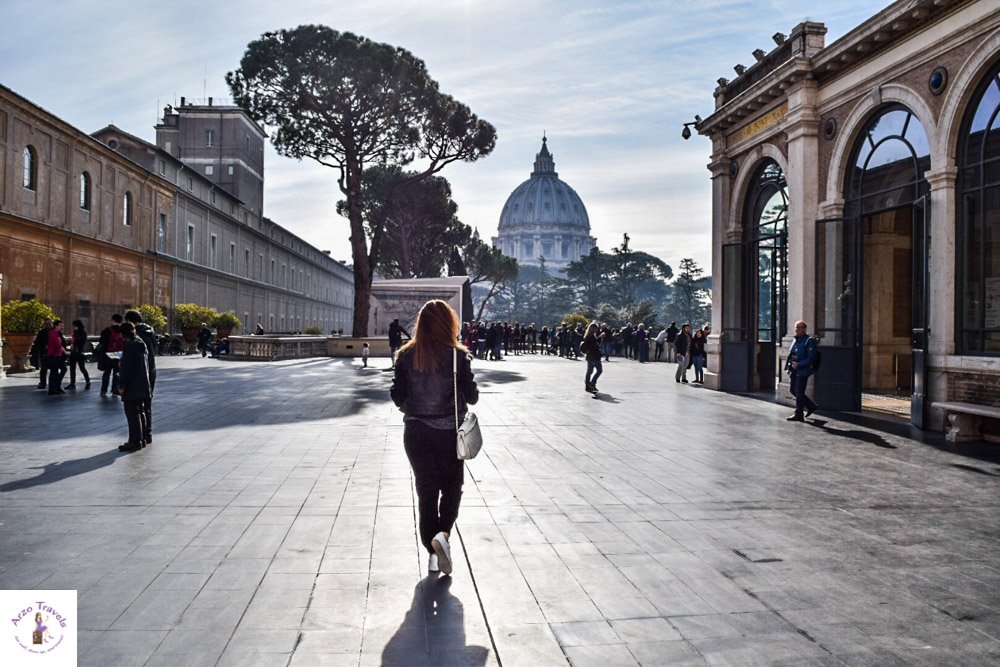 If you think Dubai is all about “bling-bling” and pompous you need to visit Vatican City to see that this tiny country, home of the Pope, is the epitome of gaudiness. But it has amazing appeal in terms of history, politics, art, and architecture. While there’s a lot in Vatican City, most of the best places to see are St. Peter’s Basilica and the Sistine Chapel. But there is more and here you will find out about the 10 best things to do in Vatican City. 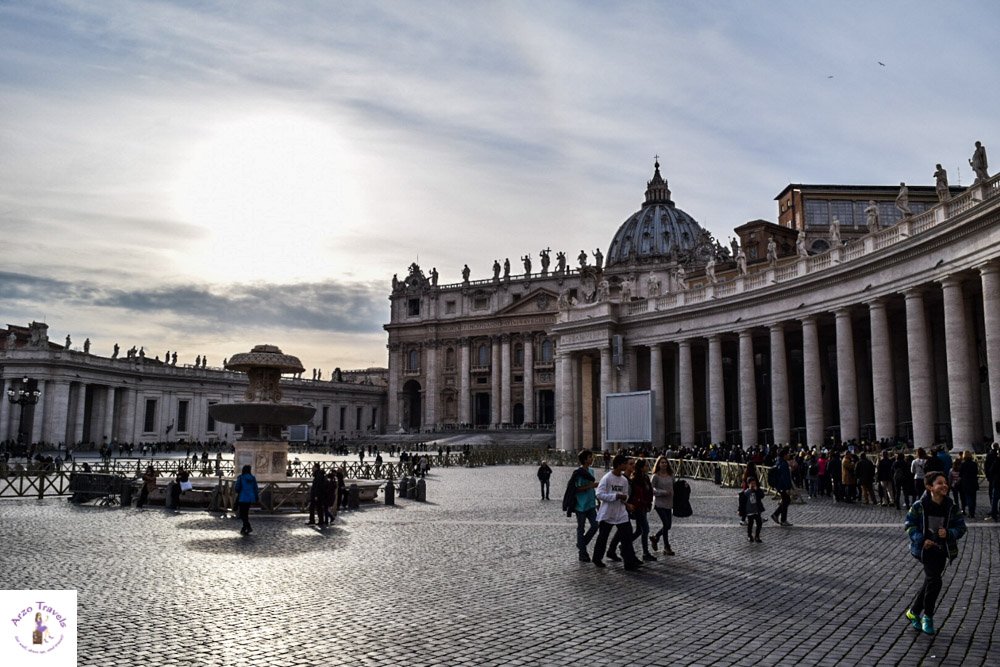 DISCLAIMER: THIS POST CONTAINS AFFILIATE LINKS. THIS MEANS I MIGHT EARN A SMALL COMMISSION WHEN YOU BUY A PRODUCT/SERVICE (AT NO EXTRA COST TO YOU). MORE ABOUT IT HERE.

Looking for some of the best Vatican City travel tips?

General Tips for One Day in Vatican City

What Tickets to Buy For One Day in Vatican City?

There are different tickets available, and I have picked those I think are the best. I normally book tickets via GetYourGuide because I love their a) support and b) their generous cancellation policy.

One thing I like to mention first: though we visited at the end of January (so off-season) we were totally surprised to see how busy it actually was and how long the lines were. We were skeptical if we really needed a “skip the line ticket” as we thought it was just about paying extra.

The St. Peter’s Basilica is free but you will have to pay if you want to get to the top of the basilica. The lines were as long as the line of those wanting to visit the museum (which you need a ticket for). I first visited the Vatican Museums – with my skip-the-line ticket- and then entered – without any queuing – the basilica. 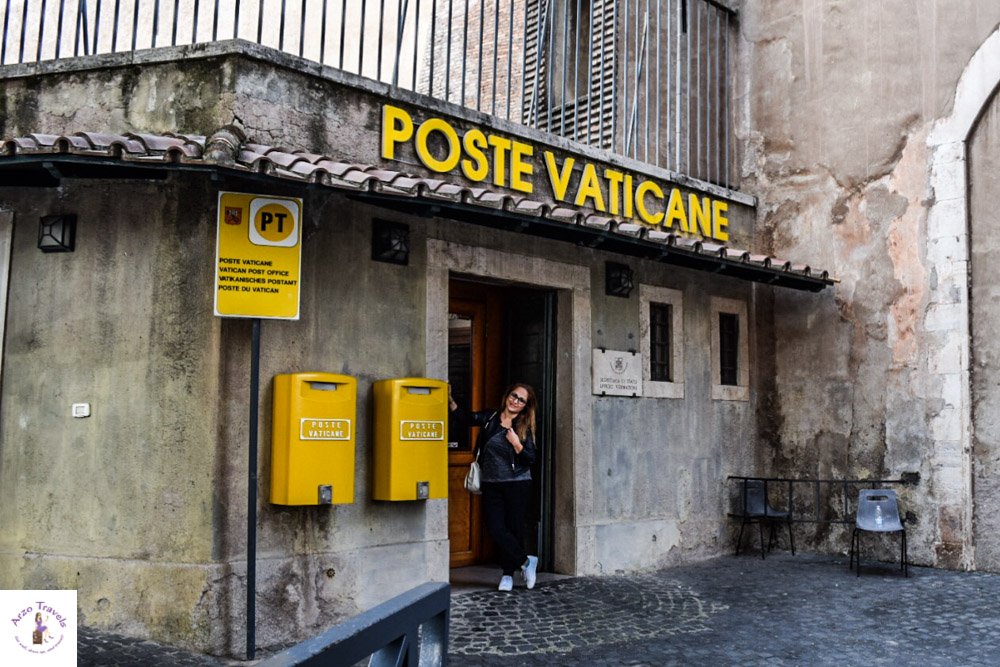 Here they are – the top attractions in Vatican City.

The frescoes on the ceiling were painted by Michelangelo between 1508 and 1512.  By the way, I once read a biography of Michelangelo and ever since then I have become fascinated by him. So, reading a biography might not be a bad way to prepare a bit for your Vatican City trip.

It’s a good place for some quiet reflection and appreciation of truly fantastic art that must have been a pain in the neck to create.

It’s true! There are two mummies in the Gregorian Egyptian Museum, along with other artifacts reflecting the art and architecture of the Egyptian peoples and another ancient Near East civilizations. 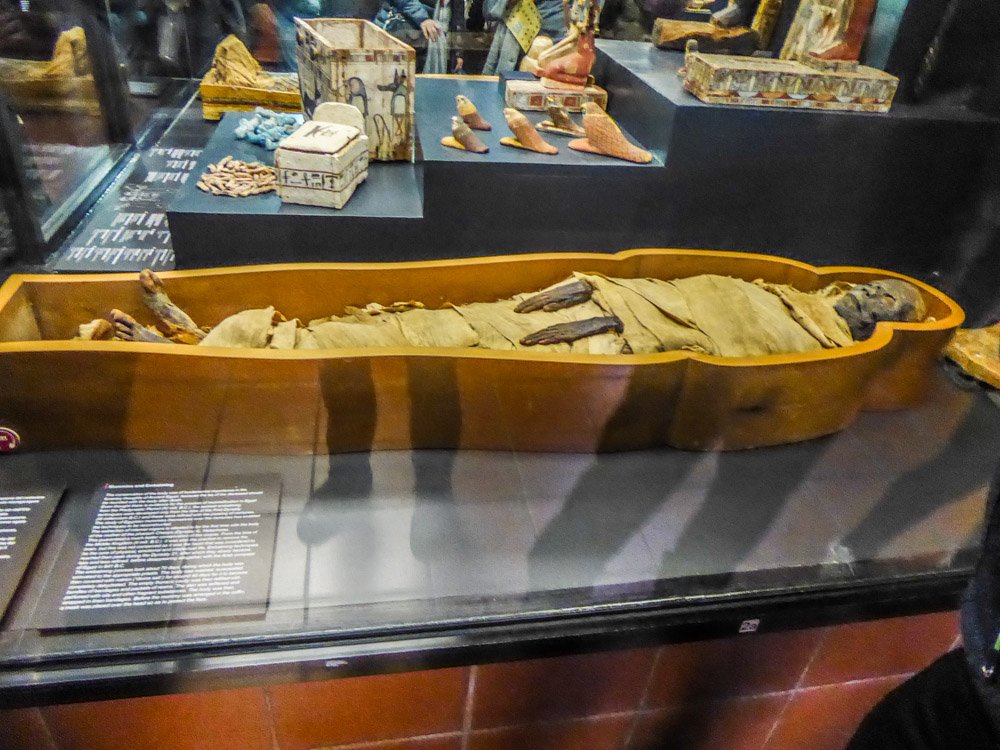 You’ll find ancient Sumerian Cuneiform tablets that are nearly four thousand years old, the Cylinder of Nebuchadnezzar II (more than 2,500 years old), as well as a hemicycle of granite statues from different ages.

If you didn’t read up on what to see in Vatican City ahead of time, this exhibit will probably surprise (and delight) you.

Two of the Vatican mummies are actually fake and only date back to the Middle Ages.

An art lover will enjoy a tour of Raphael´s Rooms (Stanze di Raffaello)- they are four rooms painted by the famous Renaissance artist, Raphael, and his students. Raphael started the work in 1508 and continued until his death in 1520. The work was completed in 1524 by his students.

His “School of Athens,” a fresco you’ve probably seen in textbooks, is there to admire in person. The painting is meant to embody “Philosophy” and in the center, you see Plato and Aristotle in the discussion.

Necropolis of the Via Triumphalis

If you haven’t gotten enough of ruins during your stay in Rome yet, taking a special tour of this ancient Roman burial ground may be of interest. You’ll walk along modern terraces that give you a full view of the excavated site, filled with now-open tombs of Roman citizens (be warned, there are real skeletons in there!). What’s remarkable is you can still see the painted interior of one tomb.

Maybe this is a silly thing to include when mentioning things to do in Vatican City, but walking down this amazing Spiral Staircase (Bramante Staircase) is a fun experience.

It’s designed as a double-helix (like DNA) with one staircase leading up, and the other down, never intersecting. It’s one of the most photographed staircases in the world, so it’s certainly worth a look, although going down it after walking a large portion of the 9 miles of museums can make your legs feel a bit wobbly. 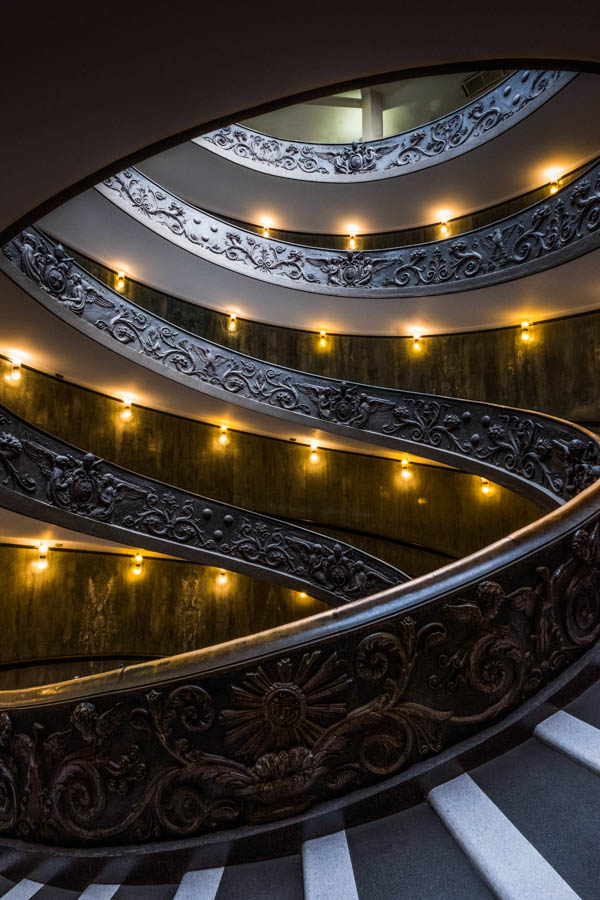 There is so much art within the 9 miles of the Vatican Museums, it’s hard to pick just a few pieces to focus on.  However, the Laocoön, a famous sculpture depicting the death-by-sea-serpent of the Trojan priest who warned his people about the Trojan horse’s deception, is a brilliant marble copy of the bronze original sculpture worth stopping to admire in the Octagonal Court. 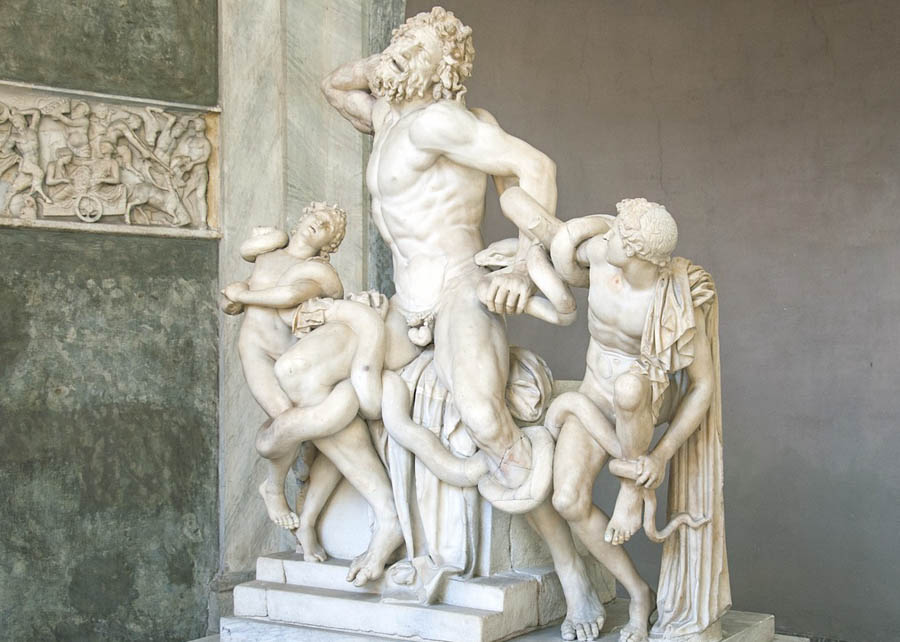 The Gallery of Maps

Another top place to visit in Vatican City is the Gallery of Maps – here you’ll find the two walls of a long hallway frescoed with topographical maps of Italy. 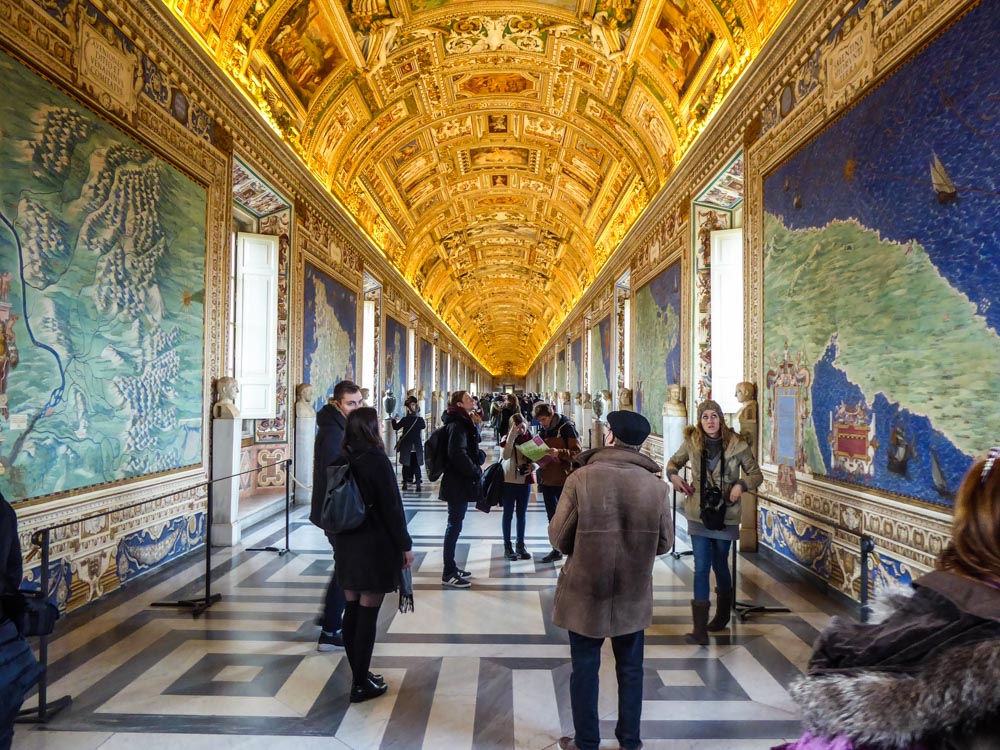 The hallway is bright and beautiful and the maps are truly gorgeous (if only about 80% accurate). It has a different feel than the rest of the Vatican Museum and allows one to appreciate a different type of art. This has been one of the most stunning places in Vatican City.

The marble statue of the young god Apollo has been in the Vatican since at least 1508 and is a 2nd-century A.D. copy of a 330 B.C. bronze original.

Why is this statue out of all the hundreds of marble creations in the Vatican? According to German art historian, Johann Joachim Winckelmann, “of all the works of antiquity that have escaped destruction, the statue of Apollo represents the highest ideal of art.” Now that’s a compliment! It also stands around Nero’s red porphyry bathtub, something worth seeing on its own merits.

Saint Peter’s Square is a large plaza located directly in front of St. Peter’s Basilica – this is the square you will see as one of the first things in Vatican City. Both the square and the basilica are named after Saint Peter, an apostle of Jesus considered by Catholics to be the first Pope. 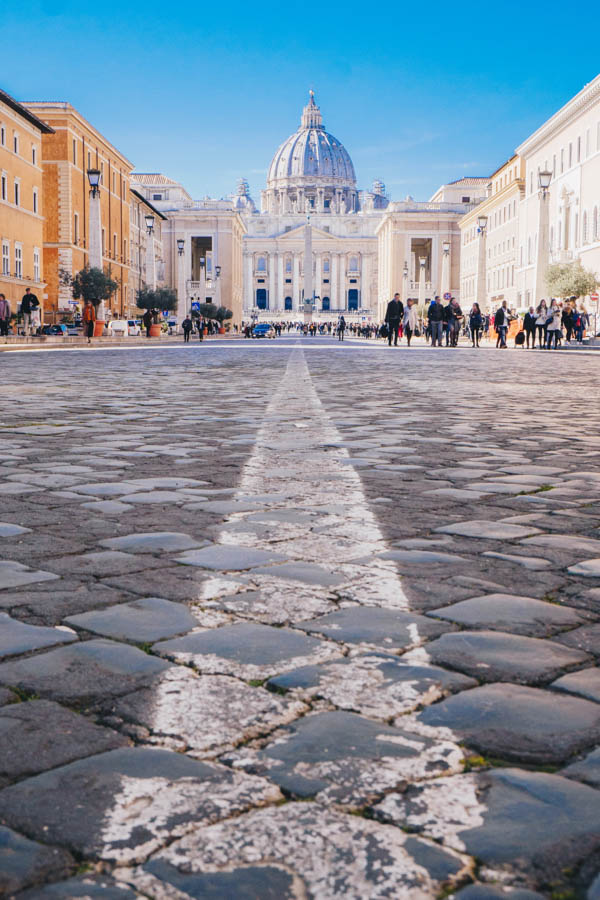 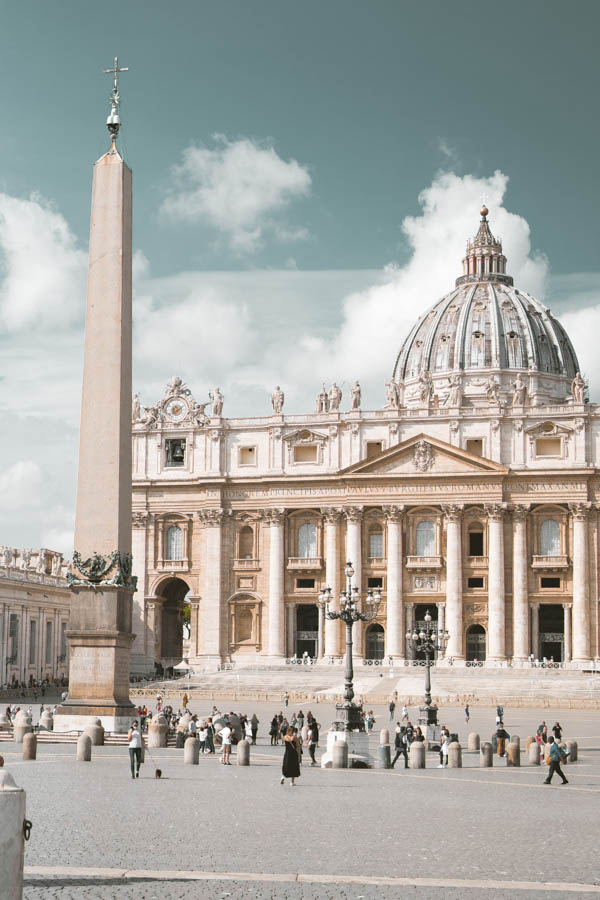 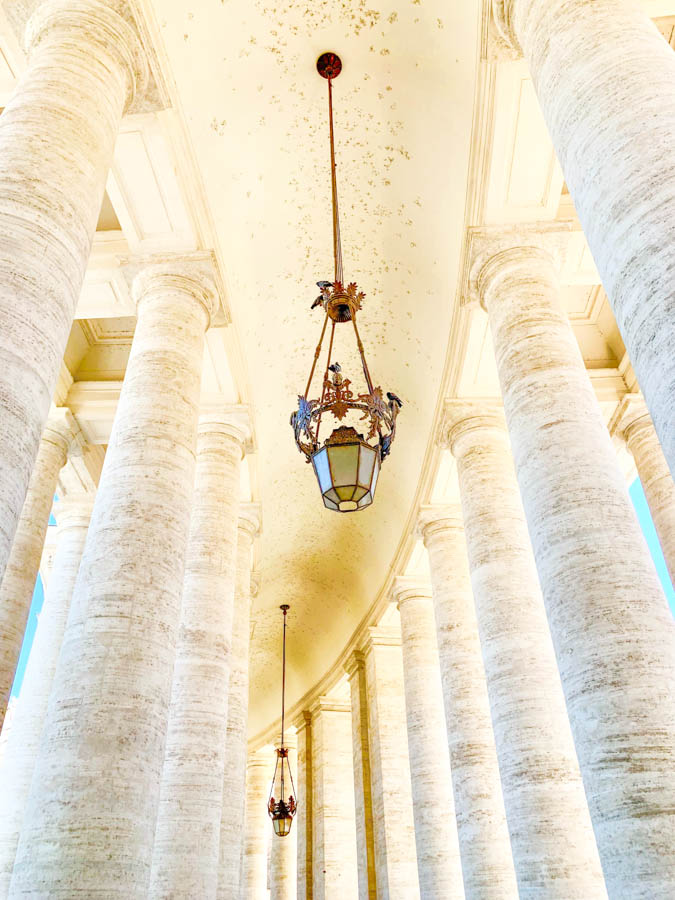 St. Peter’s Square is equally as grand with 284 columns surrounding the elliptical courtyard in front of the basilica.

The Papal Basilica of Saint Peter in the Vatican, or simply Saint Peter’s Basilica, is a church built in the Renaissance style. The work had begun by Pope Julius II in 1506 and was completed in 1615 under Paul V. 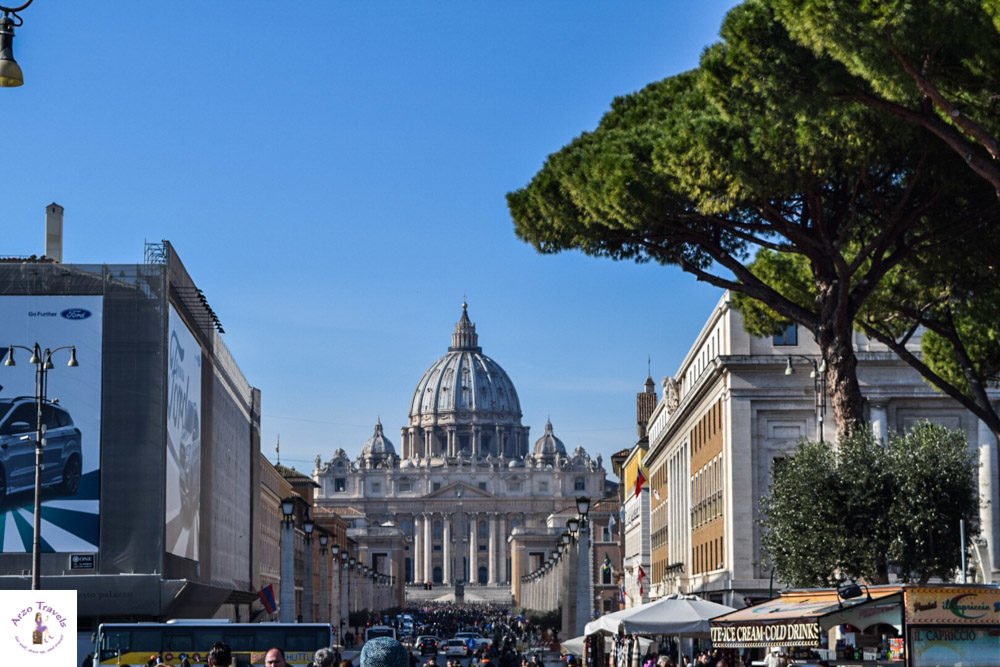 St. Peter´s Basilica is undoubtedly one of the best places to visit in Vatican City: it’s the focal point of the entire city-state, and it’s the largest church in the world, able to hold some 60,000 people. 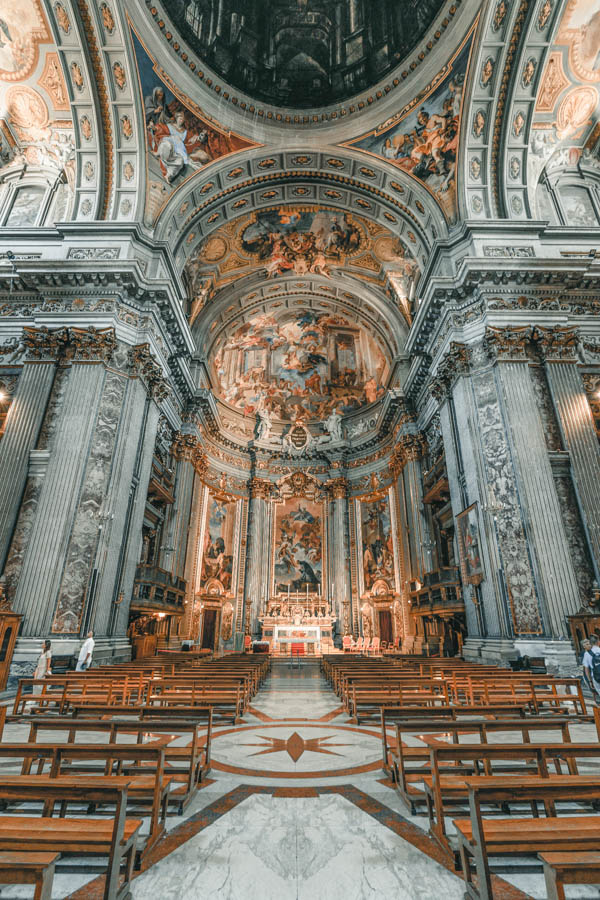 Located inside St. Peter’s, this is undoubtedly religious art crafted by the master Michelangelo. This work of Renaissance sculpture depicts the Virgin Mary holding the now-dead body of Christ and is remarkably the only work Michelangelo ever signed. 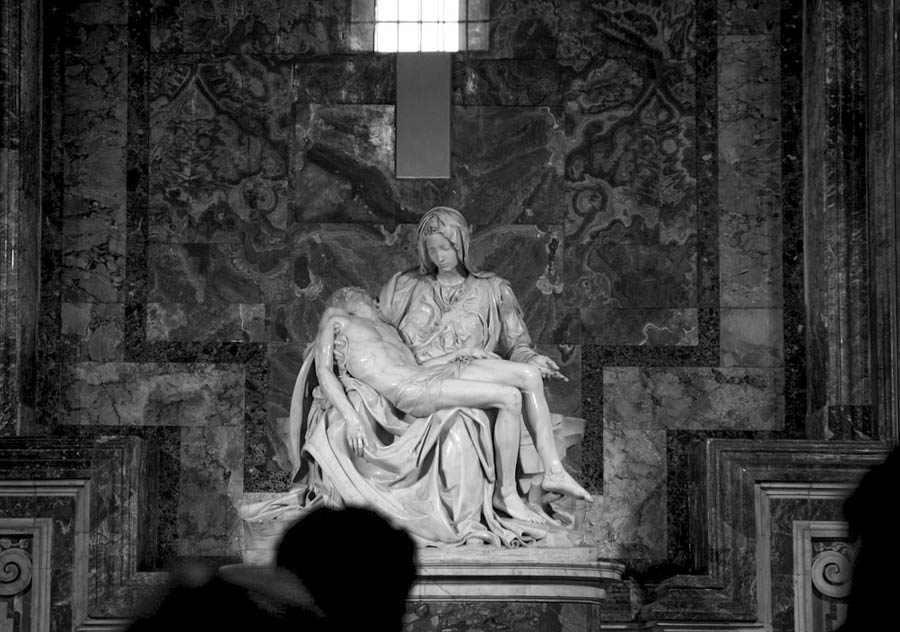 Because of an attack in the 1970s that took off part of Mary’s nose and her arm, the sculpture is now behind bulletproof glass. Regardless of your religious views, a sculpture depicting a mother holding her dead son is moving, and the fact it was made by the famous Michelangelo makes it worth viewing.

After admiring the St. Peter´s Basicila, you can get to the top of the dome – and have amazing views of Rome and also of Vatican City. 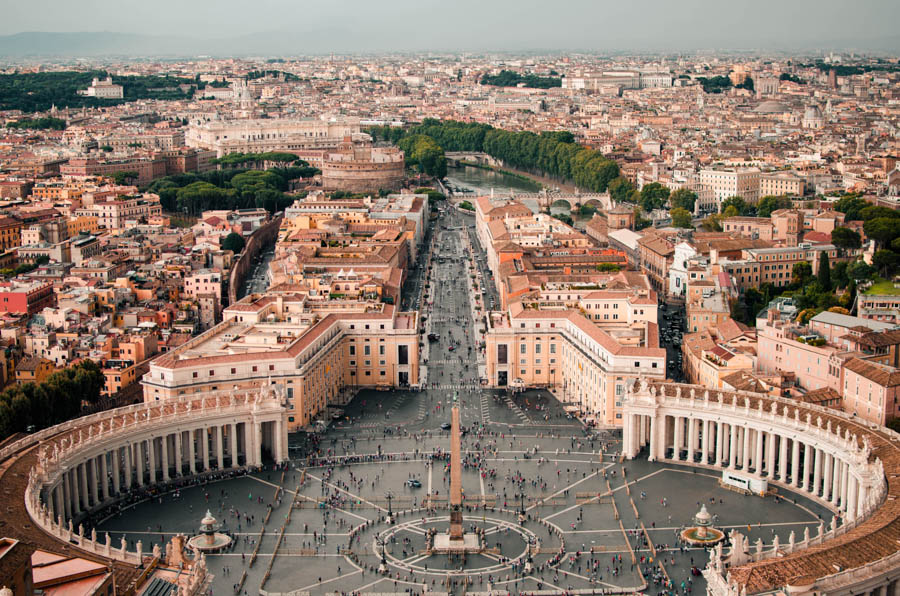 To enjoy these views from the St. Peter´s Basilica Dome you have a couple of options. 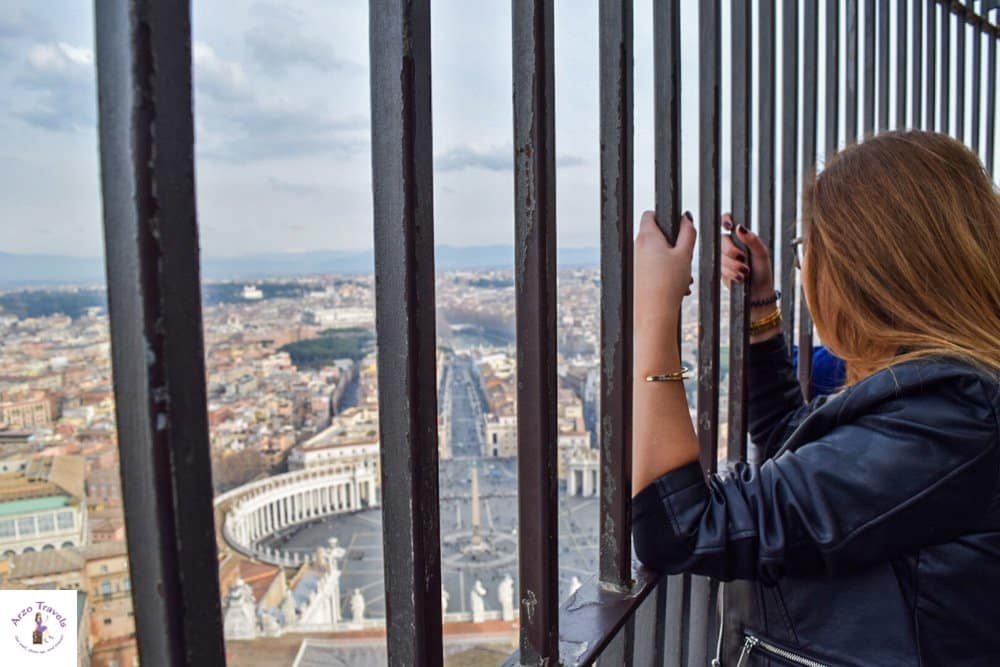 Because I went in January, I didn’t fully appreciate the Vatican Gardens, but if you go when plants and trees are blooming you’ll get to experience a variety of wonderful and ornate fountains and relative quiet. 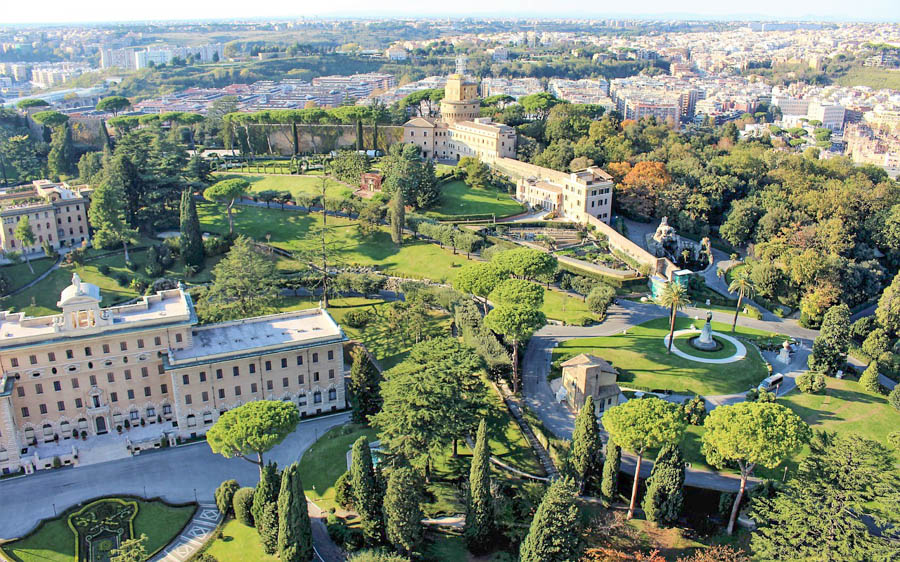 They only allow a certain number of reservations per day. So unlike the can’t-breathe-claustrophobia of the Sistine Chapel, the rolling shaded walkways of the gardens will be a relief from the crowds.

Last but not least: You have the cutest post office and pretty doors in Vatican City (for those who #haveathingfordoors ). 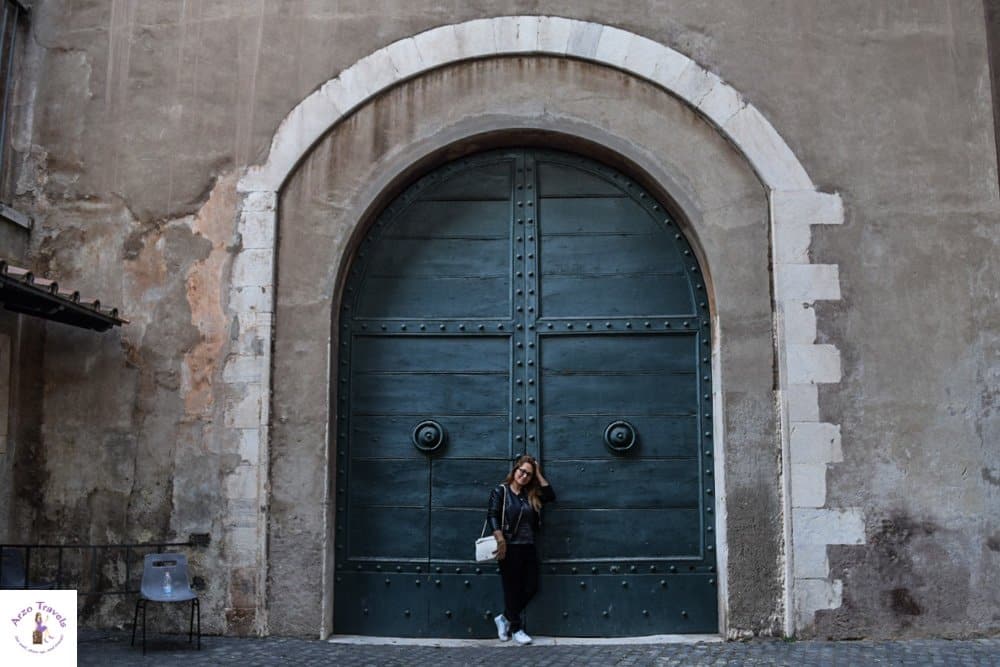 So religious or not, Vatican City is worth your time. When in Rome make sure to add Vatican City to your itinerary and learn about the history and… And these tips about the best places to visit in Vatican City have helped you to plan your trip! 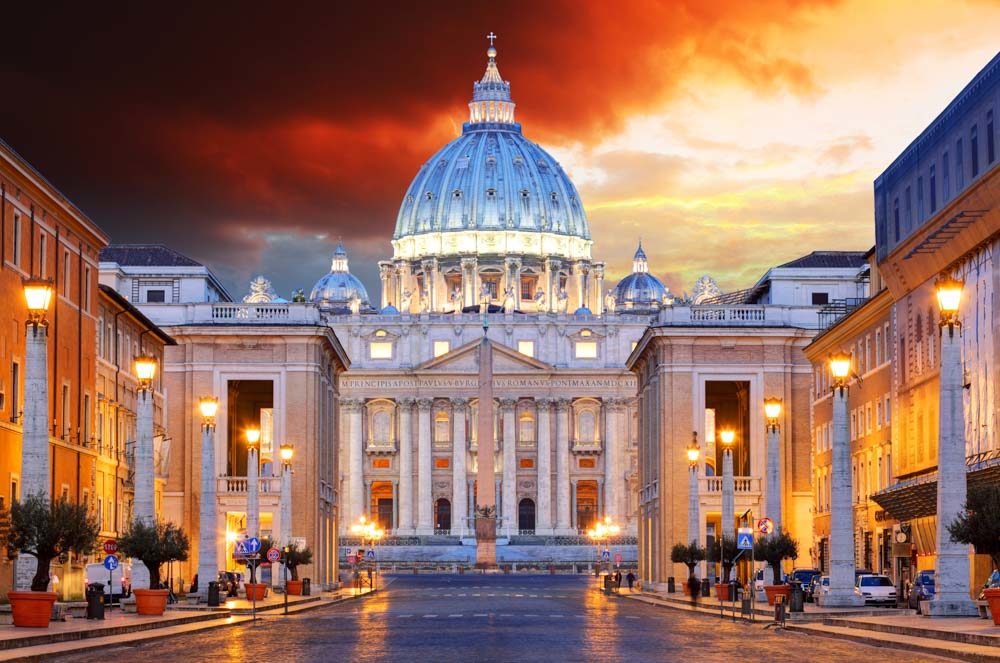