The Bernina Express train in Switzerland is one of the most amazing, the most scenic, the most stunning train rides in the world.

It is such an impressive experience that I have done it many, many times. In summer. In winter. In fall. And I cannot remember for sure, but I have probably also enjoyed the Bernina Express also in spring. Why? Because it is amazing. The window views are excellent! Believe me, I am an expert on train rides in Switzerland and this ride is top-notch. 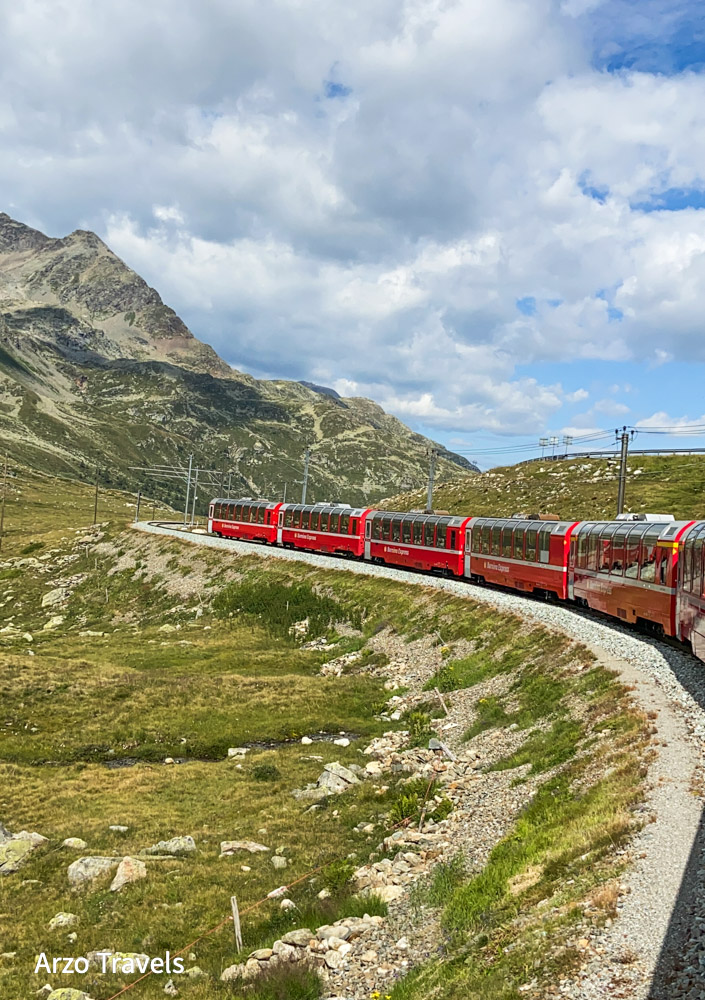 From fancy St.Moritz (at 1822 meters above sea level), the Bernina Line goes up to Ozpizio Bernina at 2253 meters which is the highest regular train station in Europe.

Here are some facts first and then we will talk about booking options and the different stops – including my own personal opinion! 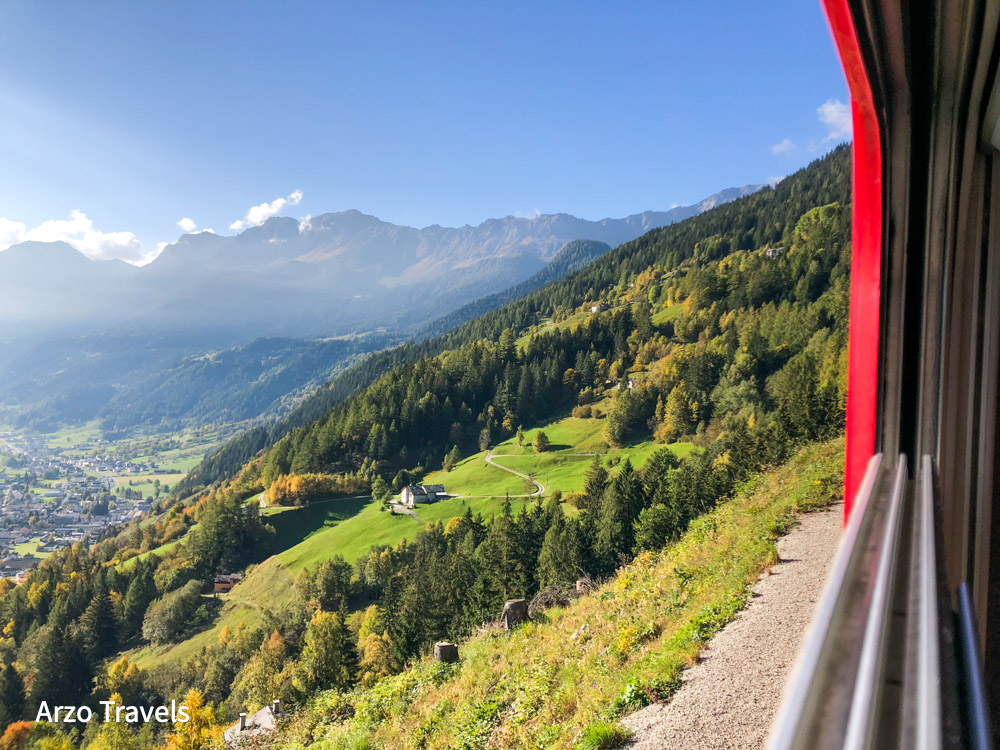 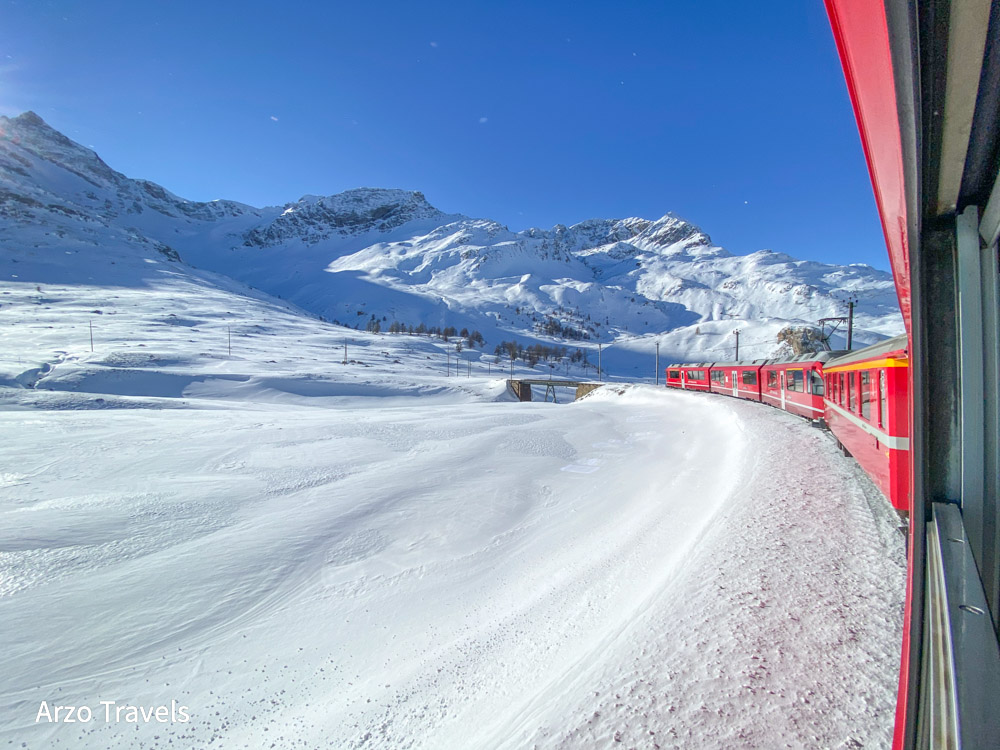 Where to Buy Ticket For the Bernina Express?

You can buy your ticket for the full journey from Chur to Tirano, or end the trip early at one of the village stations along the way.

I always prefer buying tickets on the GetYourGuide website because of the generous cancellation policy rather than buying tickets on the official websites. However, if you have a Swiss Travel Pass, then you do not need to buy any ticket at all – the Bernina Express is free with the Swiss Travel Pass. You must have a reservation though for the Bernina Express, and this is not cheap. If you get off the train, you cannot just hop onto the next train to continue your journey – if you plan to do it, you will need another reservation. The Swiss Travel Pass is also available on GetYourGuide.

Okay, you do not have panoramic windows, but the route is the same. And the views are as stunning! Even without the panoramic windows. Actually, there are sometimes just a couple of compartments of the Bernina Express in between the regular trains.

The only thing to keep in mind is that there are local trains that have the same route but more stops and also there are no direct connections. You would have to change trains if you want to do the whole tour with these local trains.  TIP: Some Bernina Express trains have extra compartments that are actually local trains and can be used by those without reservation for the Bernina Express.

These are the main stops that you can experience, with a full Bernina Express schedule available on the official website. The Bernina Express doesn’t stop as frequently – or for as long – as the regional trains that also make use of these lines. But there are a few short stops at picturesque villages along the way.

The official start/end of the Bernina Express is Chur. Chur is an Alpine city and the capital of the Graubünden canton (Grison). It is the oldest town in Switzerland and has a settlement history of over 5000 years. Its car-free old town (dating back to the 13th century) is quite nice, though it is not one of the best places in Switzerland to visit in my personal opinion. However, it is the starting (or ending) point of this exceptional train ride, so you might want to spend a few hours here. 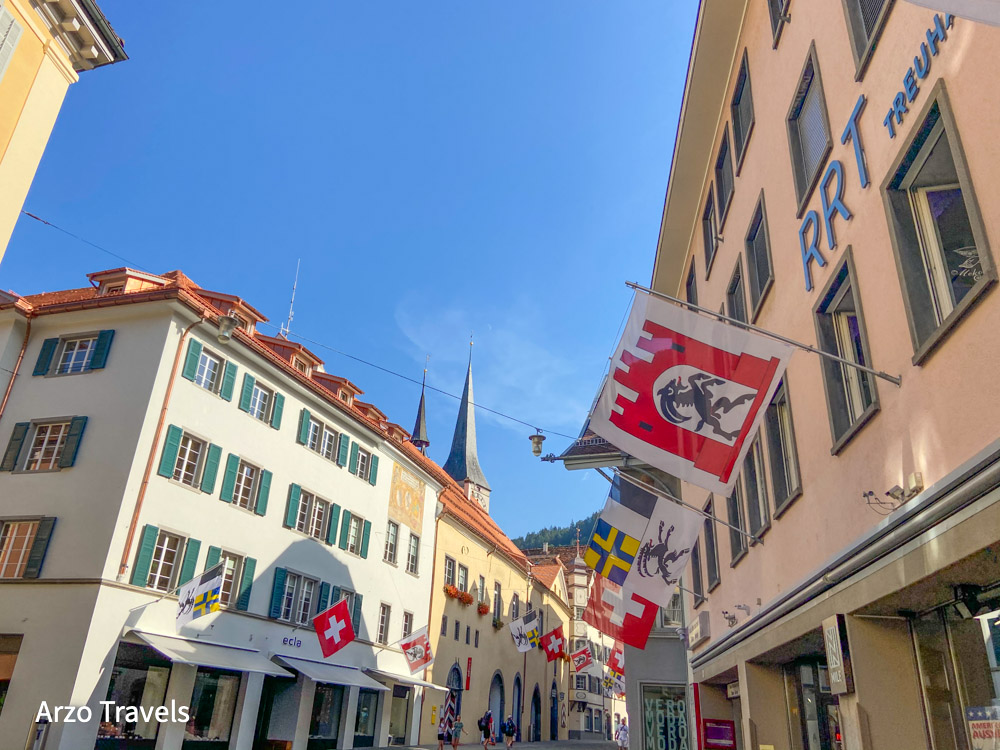 From here your journey starts and the first few minutes the views are…not very pretty but after a while the views get better. You start passing the famous Rhine River (but not the Rhine Gorge) and head towards Tiefencastel.

From Chur, you will quickly break out into the Swiss countryside before you reach the stop at Tiefencastel. During this section of the track, you will pass through a few tunnels and the well-known Domleschg Valley – famous for its castles.

Tiefencastel is part of the Albula district and falls under the canton of Graubunden. It’s a small village with only 3% of its area actually devoted to settled land. The rest is made up of forests, rivers, glaciers, and mountains. There are plenty of natural opportunities, including hiking and biking if you come during the warmer months.

After setting off from Tiefencastel, you will make your way to Filisur. Personally, this part from Tiefencastle to Preda is one of my all-time favorite train rides in Switzerland – even after countless train rides, I am still amazed by these window views. It gets even better later on, but this is already pretty amazing.

Before reaching the village, admire the Landwasser Viaduct – one of the most famous bridges on the journey. The viaduct (bridge)  spans the Landwasser Valley and the construction of the three main pillars in 1901/02 has been and is still impressive – it is one of the highlights of the Bernina Express.

The Alpine village of Filisur sits high up on a hill which provides a great vantage point for the surrounding landscapes. Here you can spot the convergence of the Albula/Alvra and Landwasser rivers.

There is plenty to do in both the summer and winter months. With long walking and hiking trails available, you can navigate your way through the surrounding Bergün/Filisur vacation region with ease.

The village of Bergün also goes by the Romansh name of Bravuogn and is high up in the alps at an elevation of 1,367 meters above sea level. You will start gaining altitude on your way here via a series of spirals. 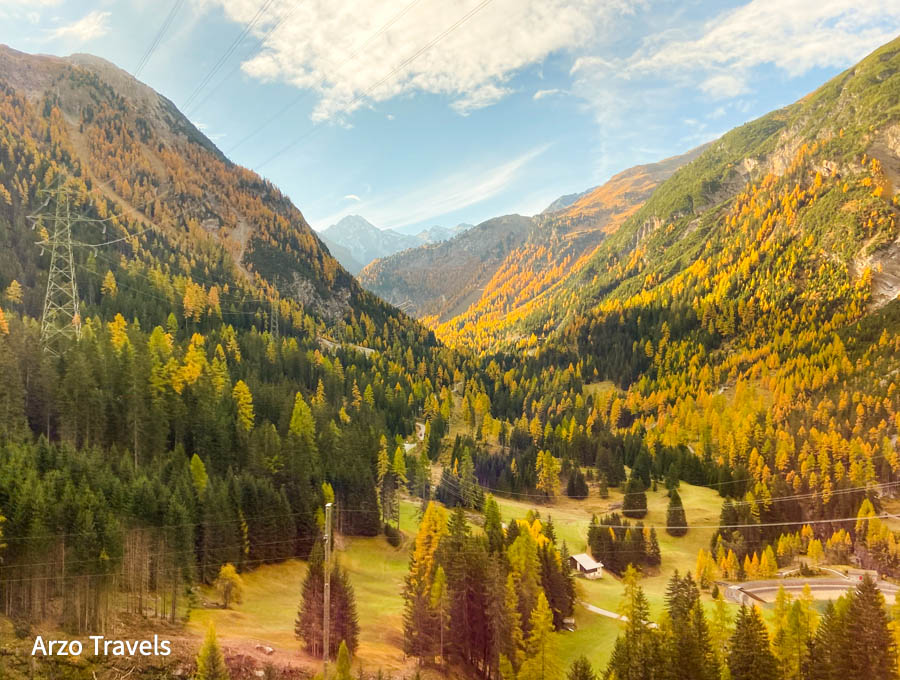 It is a small town that has remained relatively minor in terms of international tourism, despite being en route to St. Moritz. There is only one hotel in the area, but other accommodation options are available. 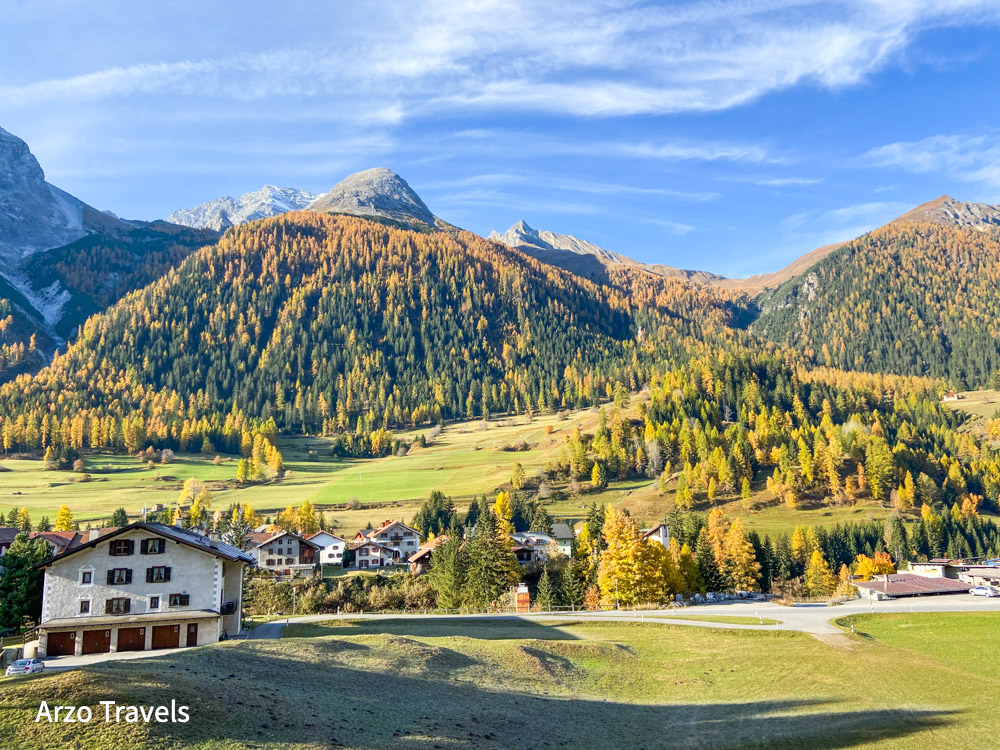 Then you are heading towards Pontresina, which is a mountain village, at 1’805 meters, flanked by the Bernina massif near St.Moritz. It’s known for its Belle Epoque hotels and traditional Engadine stone houses with decorated facades.

In the summer months, it is a great base for some beautiful hikes because the Upper Engadine Valley is one of the most beautiful in all of Switzerland.

Between Pontresina to Bernina Diavolezza (stop on request only) you will have some more absolutely stunning window views. Especially the views of Mortaratsch Glacier are one of a kind. If you are heading towards Tirano, then sit on the right side and you will see this stunning glacier for some time starting from Mortaratsch stop for a couple of kilometers.

Then you are headed towards Bernina Diavolezza. The ride from Pontresina is gorgeous but even more gorgeous it is to get off the station and take the cable car to enjoy some of the best mountain views in Switzerland. 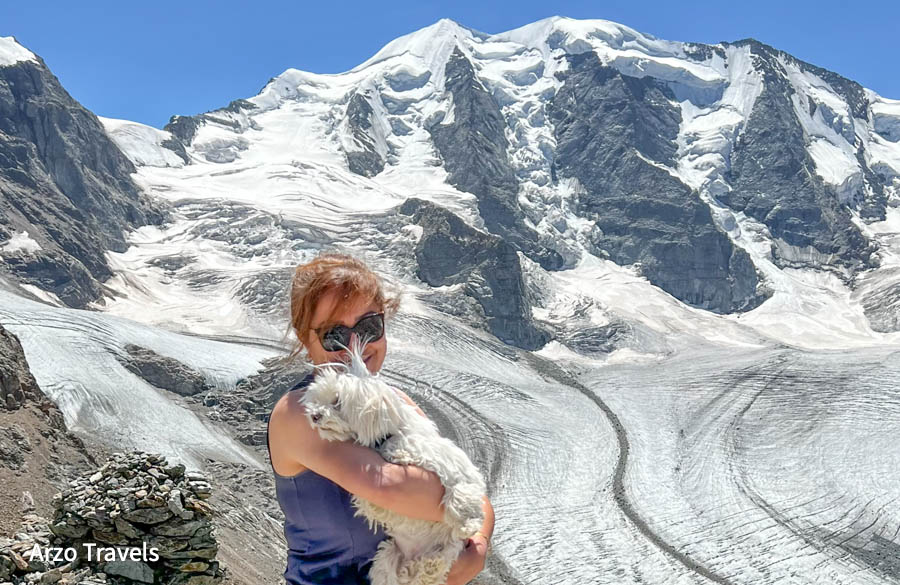 You get close to the glacier and can even walk on it – even in the summer months. It is indeed an impressive attraction. However, since the Bernina Express does not run often (in summer only once a day), you would have to take local trains as well.

Also, this a “stop on request” only, so make sure to press the stop button if you want to get out there.

Since I have done the train rides so often, I am always surprised to see the watercolor changing. It never looks the same. So do not be surprised if it looks completely to what you see in my pictures. One thing I can tell you…Passing the lake is always one of the highlights and never fails to amaze me.

This stop also marks a switch in the culture and language use found throughout the rest of the journey — from German to Italian.

After leaving Ospizio Bernina, you will only descend less than 200 meters before your next stop in Alp Grum. It was created as a crossing loop along the route between Ospizio Bernina and Poschiavo on the Bernina line. 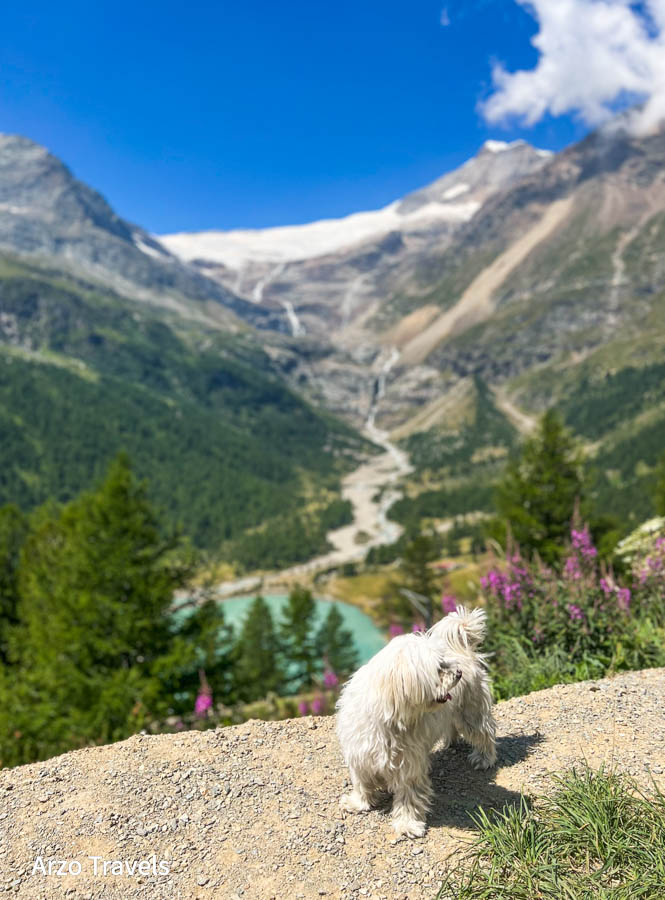 The main structure here is the railway station itself, which also houses the hotel and restaurant. From here, you will be able to enjoy unparalleled views of the Val Poschiavo and its Palu Glacier and Lago Palu.

After the relative isolation experienced in the previous two stops, Poschiavo will feel almost like a bustling metropolis (yes, that is definitely exaggerated). It is a section of Switzerland most well known for its Renaissance-style architecture and villas that were built by residents who had achieved wealth elsewhere in Europe. 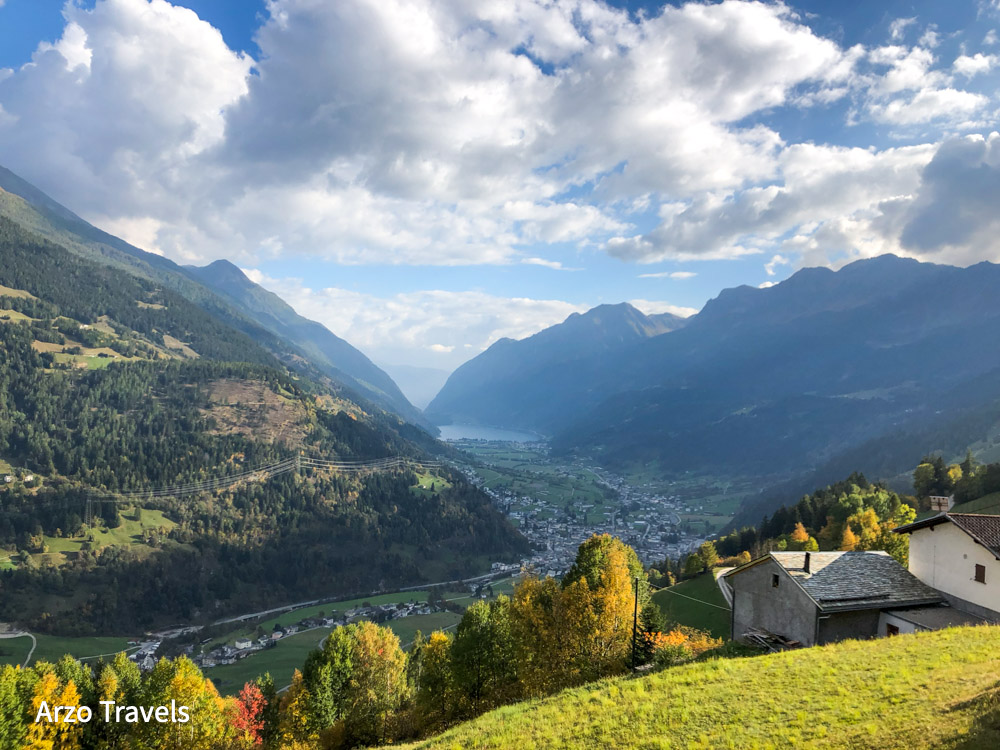 The journey here includes many winding turns as you descend almost 1,000 meters in elevation to reach the town. 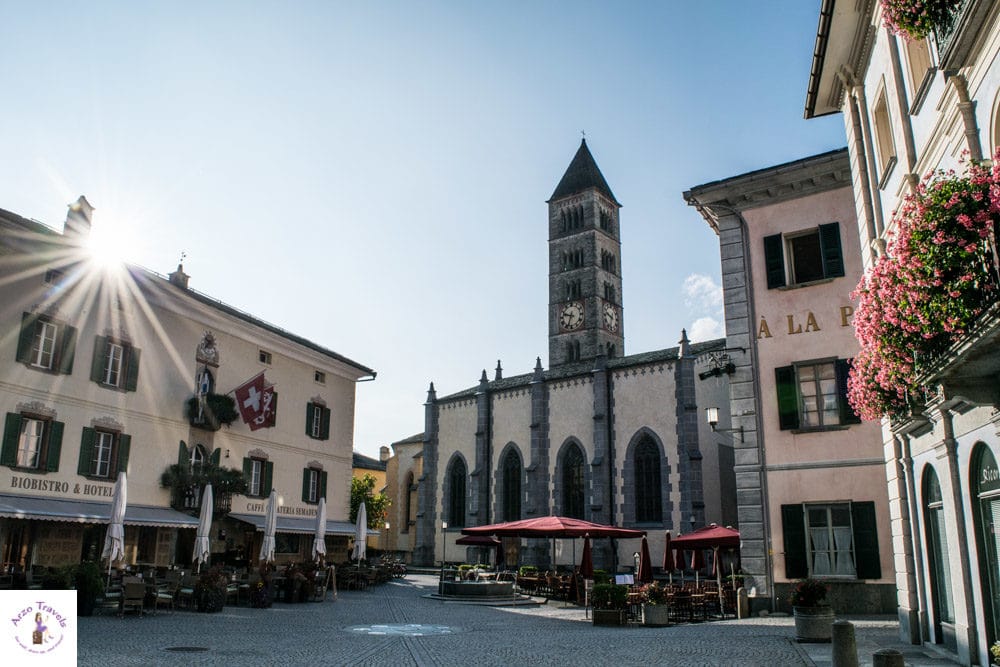 In Poschiavo are a couple of buildings (both churches and houses) that have become Swiss heritage sites of national significance. Taking a stroll through the town is a great way to experience these landmarks and get a feel for the Italian way of life that is dominant here.

Le Prese is the final station before crossing over the Swiss border into Italy. It’s a village that still lies in the Val Poschiavo and is just a few kilometers after the previous stop. You’ll find it on the shores of Lake Poschiavo tucked between large Alpine mountains that provide a dramatic setting. 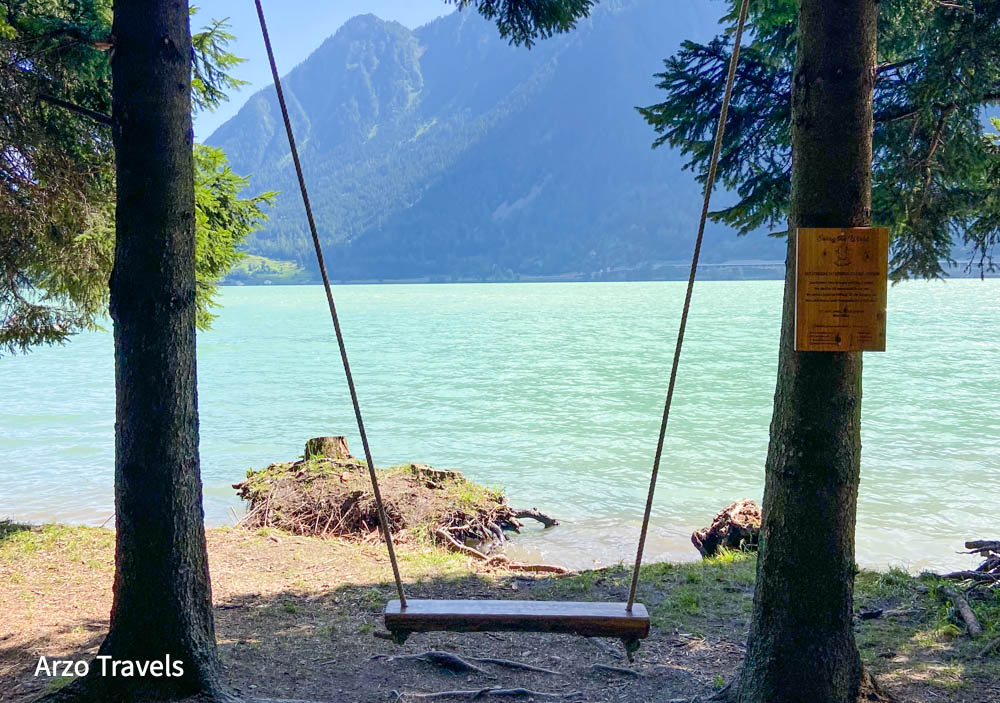 It was originally developed as a spa town but reached its peak of popularity in the early 1900s. It still holds cultural significance to this day and is the main stop between the Mediterranean environment of Italy and the Alpine glacier region of Bernina.

There is plenty to do in this town for those seeking relaxing natural experiences or more adventurous sports activities.

Then you are about to cross the border – in Italy, a small town named Tirano is waiting for you. Tirano, with about 9000 inhabitants, is the last/first stop (unless you continue your journey by bus to Lugano) – before you reach it you will see the Brusio Circular Viaduct which is another highlight and often considered the most spectacular construction on the Bernina Line. This viaduct turns around a 360-degree curve, lengthening the track so that it is possible to overcome the difference in altitude in the narrow Valposchiavo. 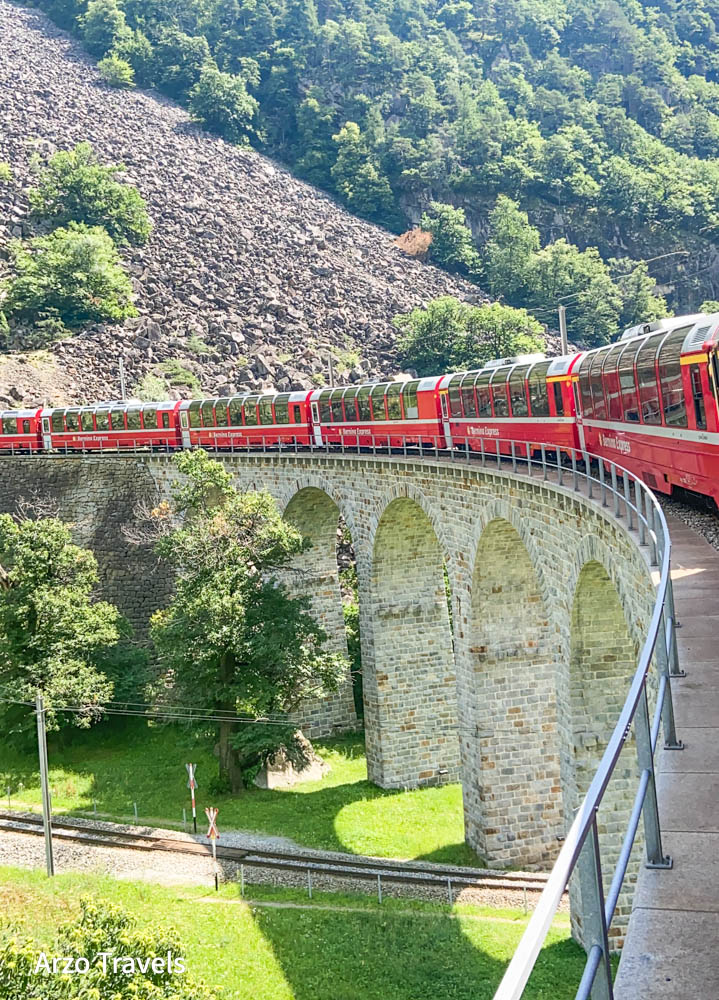 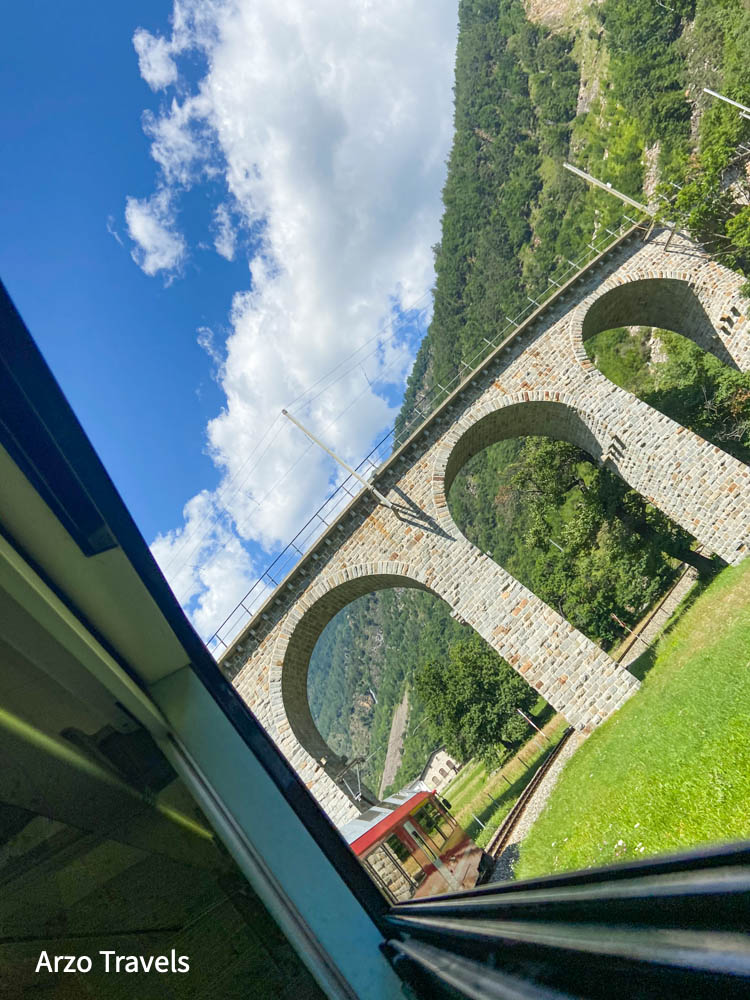 Then you will slowly enter Tirano – the southern point of departure of the Bernina Line. Just shortly before the train journey ends, you will pass the stunning pilgrimage church of Madonna di Tirano which dominates the romantic Old Town. Since you are in Italy now, it is all about ice cream, pizza, pasta, and the Dolce Vita. 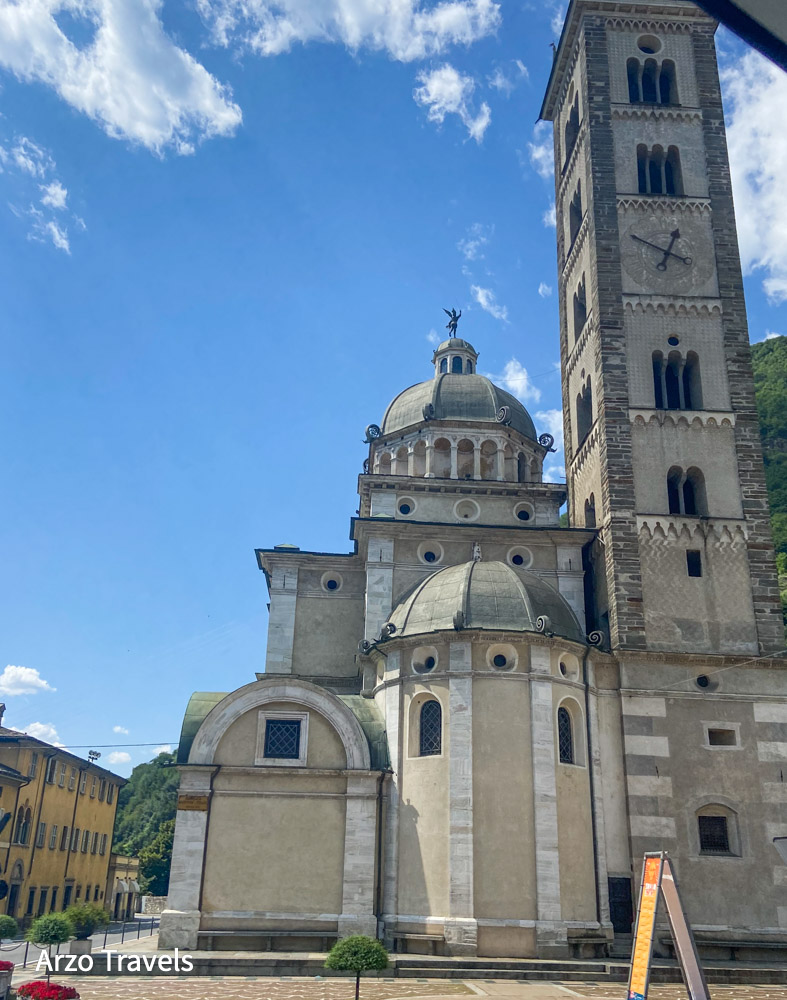 CONCLUSION: IS THE BERNINA EXPRESS WORTH IT?

Especially in the fall –  September, and October – as well as in the winter months (December-February), or the summer months (June-August) this train ride offers a lot of eye candy. The reservation fee is quite high but you can easily avoid it by taking the regular, local trains that have the exact route (but a few more stops). As mentioned in other posts, train rides in Switzerland are not just to get from a to b but they are actually amazing experiences in themselves.