I found several astonishing lakes in Italy. I visited the beautiful Pragser Wildsee (Lago di Braies) and the Lago di Sorapis – but here is one of my all-time favorites: Karersee. 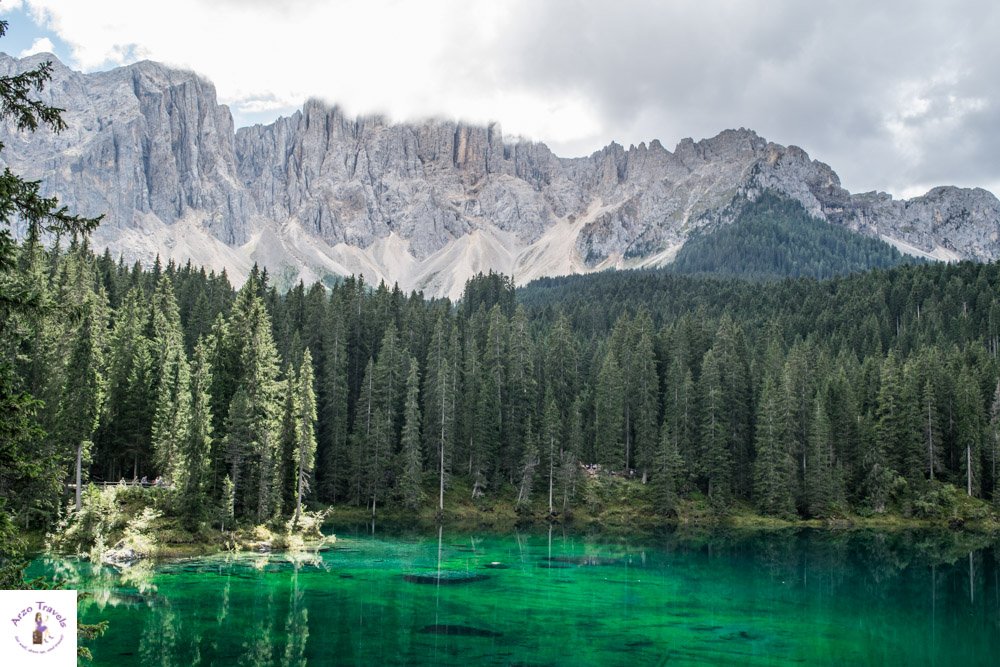 While mountain lakes often require some hiking, this lake is served to you on a silver platter, and I was so overwhelmed by its beauty.

Read all the information you’ll need for your trip to Lago di Carezza.

Here are some quick tips.

Due to its complicated history in the region (South Tyrol used to be part of Austria for a long time before it became part of Italy in the 1920s), three languages – Italian, German, and Ladin – are spoken there today.

How to Get to Lake Carezza

The lake is located in the Western Dolomites, 6 km from Nova Levante. It is a mountain lake – at 1520 meters above sea level. So getting to the lake is time-consuming.

Bolzano is the closest large city to the lake, and it takes about 35 minutes to get there to Lake Carezza. 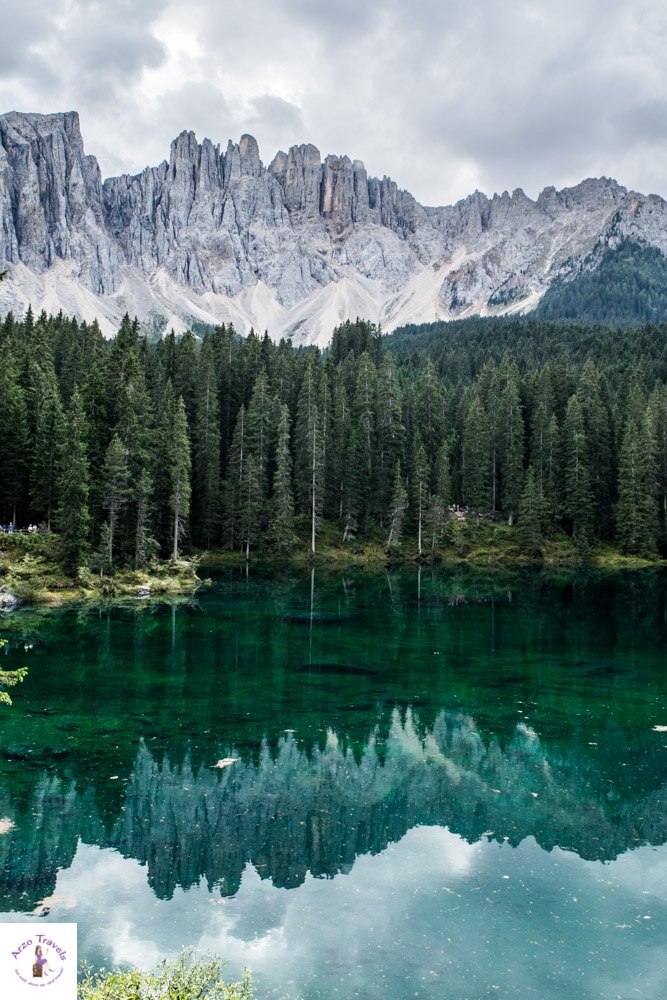 When there is a lake with an interesting color, it often comes with a myth.

Wizard Masaré was in love with a mermaid living in the lake. To seduce her, the witch Lanwerda advised him to dress up as a jewel merchant and throw a rainbow from Mount Catinaccio to Mount Latemar.

He threw a rainbow, but he forgot to dress up. So, the beautiful mermaid detected him and forever disappeared into Lake Carezza. The wizard was angry and threw all the pieces of the rainbow and the jewels into the waters. That’s why it still features rainbow colors. 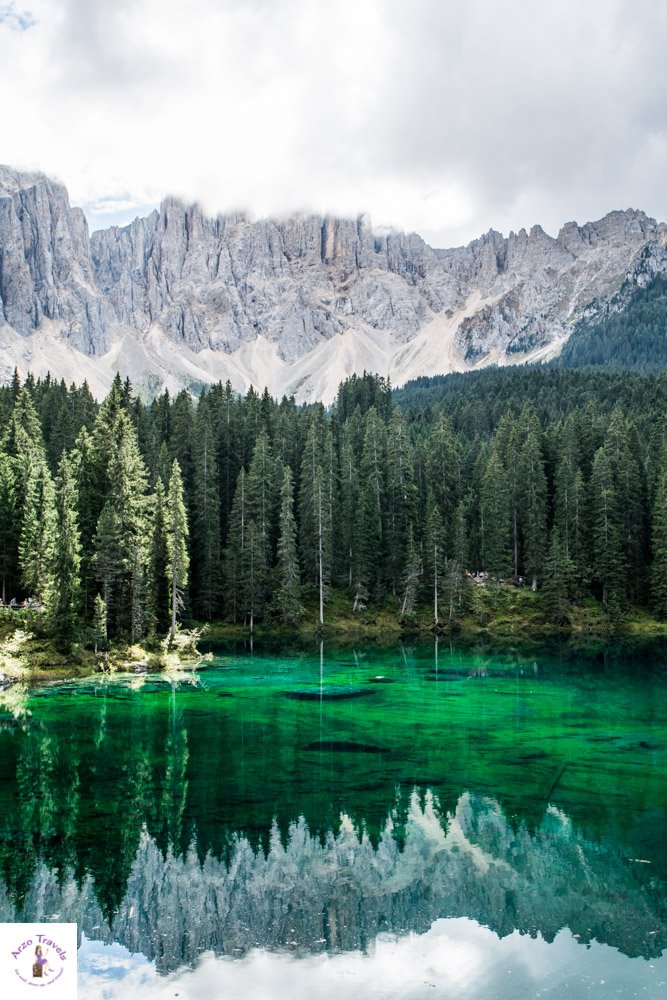 One of my readers emailed me, saying she only visited because of my recommendations…And then she told me about her disappointment. She indirectly asked whether I had photoshopped my images. So, I emailed back and forth with her. I was heartbroken because I just do minor edits and do not want to make big changes that make a place look how it isn’t.

So, what happened? After some research, I found out about a big storm – with winds of more than 200km/h – that destroyed many forests.

Many trees were cut, which apparently caused many destruction and serious consequences for its ecosystem.

Though the storm destroyed the forest in 2018, it will take a long time to recover fully.

However, I have looked up images from 2020/2021, and it still looks beautiful. Though different than what you see in my images.

The lake is just behind the toilets and take-away restaurants.

Imagine this: You just get out of the toilet, and on the way out, you are still arranging your clothes (yup, did not make that up), and then you, more or less, turn around, and there it is: One of the most stunning lakes. No, I cannot say I was prepared for so much beauty just behind the toilets. 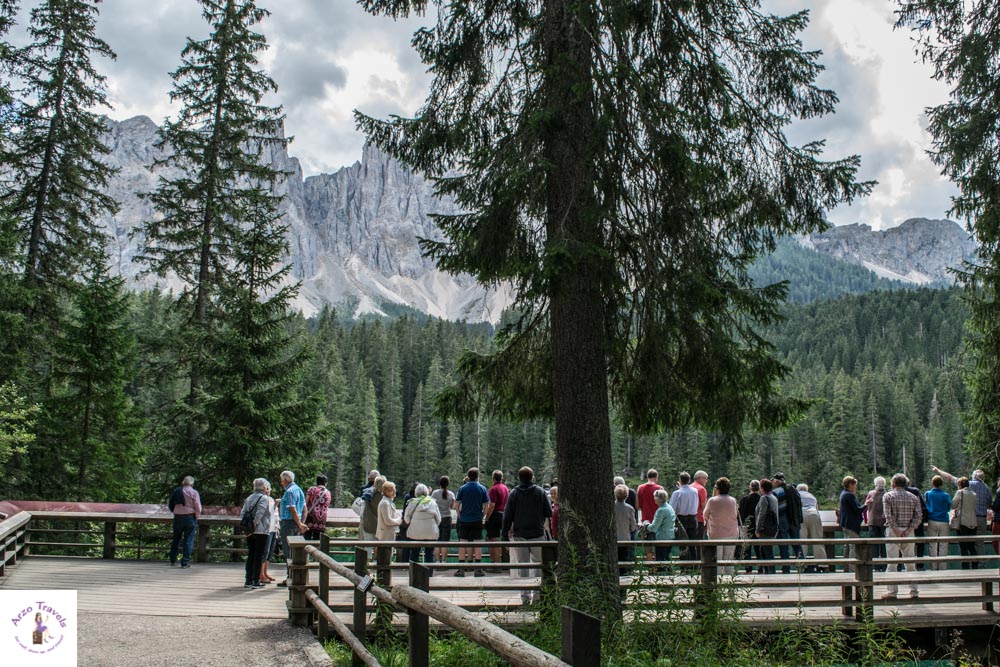 So, while I appreciate the beauty that comes without any effort, I can honestly say I was a bit speechless and probably just stood there for a moment, transfixed. After a time, I collected myself and started enjoying the lake from the platform. 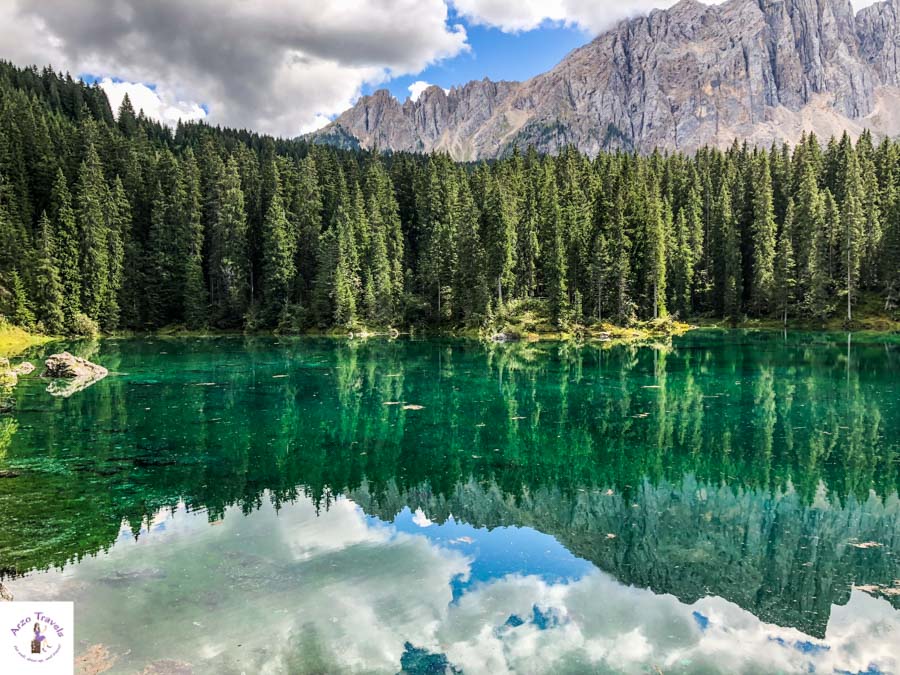 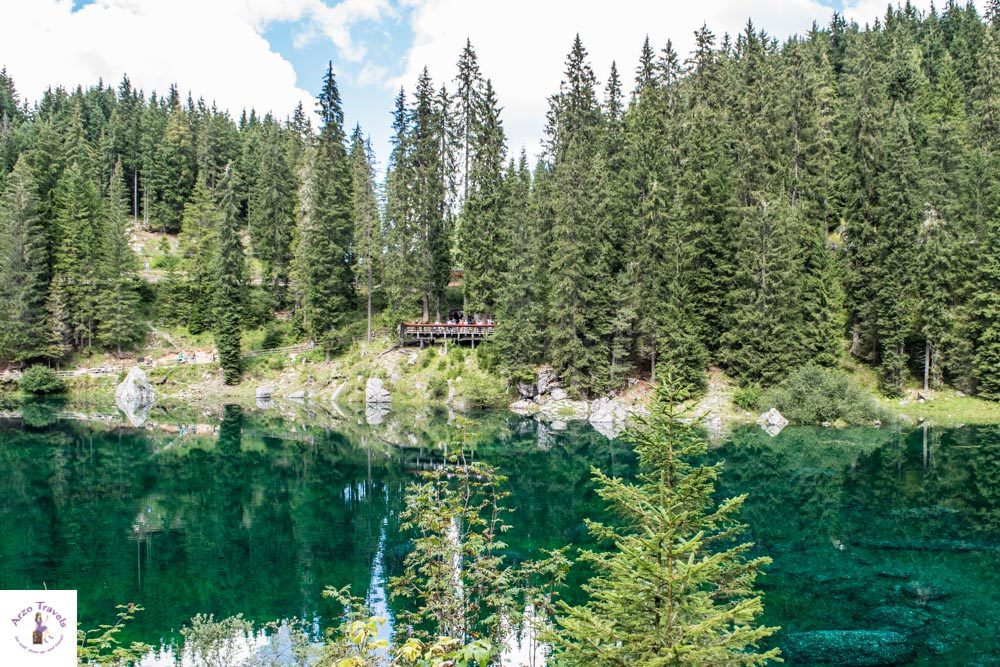 Shares
Lake Carezza is fed by subterraneous springs from the Latemar Group. With its gorgeous color and view of the Rosengarten and the Latemar mountain ranges (part of the Dolomite mountain range), makes this place one of the prettiest I have seen in a while.

WHAT TO DO AT LAGO DI CAREZZA

Okay, the lake itself is tiny, and there isn’t that much to do. But once at the lake, make sure to stay a bit and not just take pictures and drive away quickly.

Hike Around the Lake

The lake is tiny. As you can see from the images, it is just a mini lake, but we can see that size doesn’t matter because it still beats all other lakes in Italy. 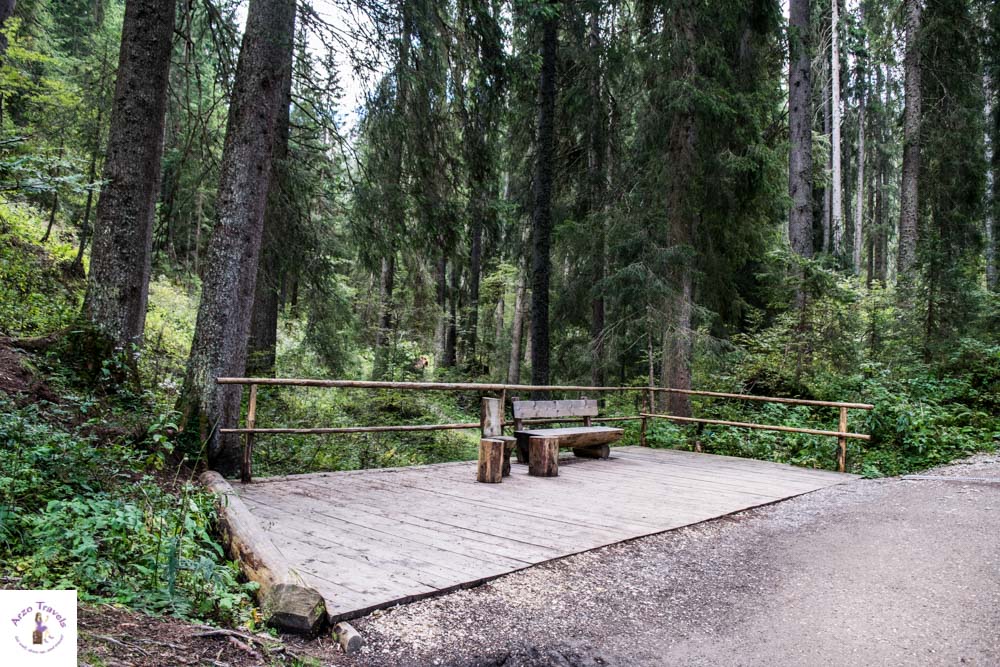 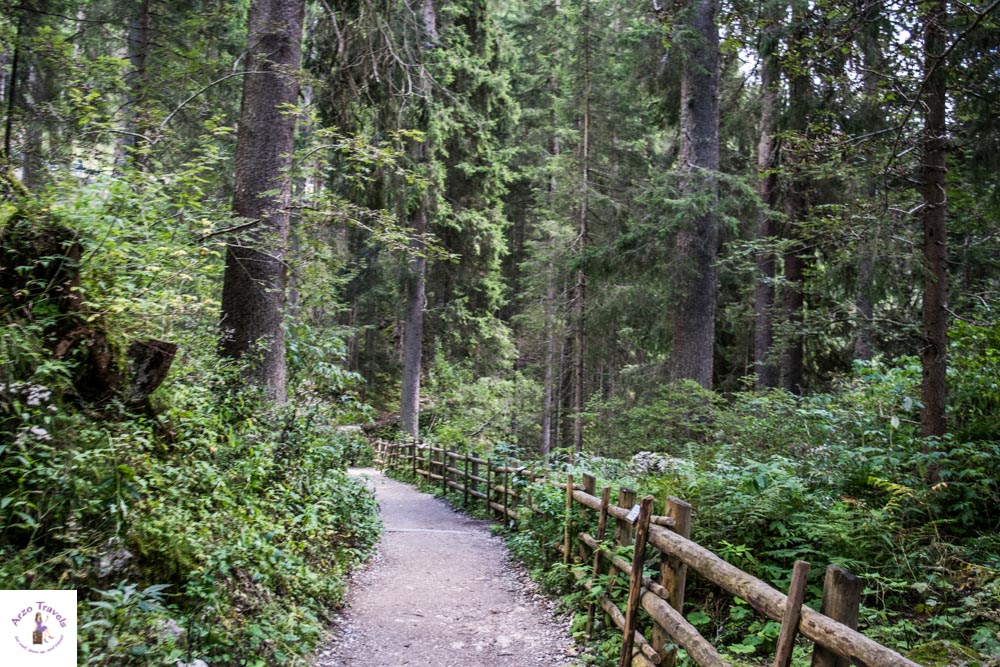 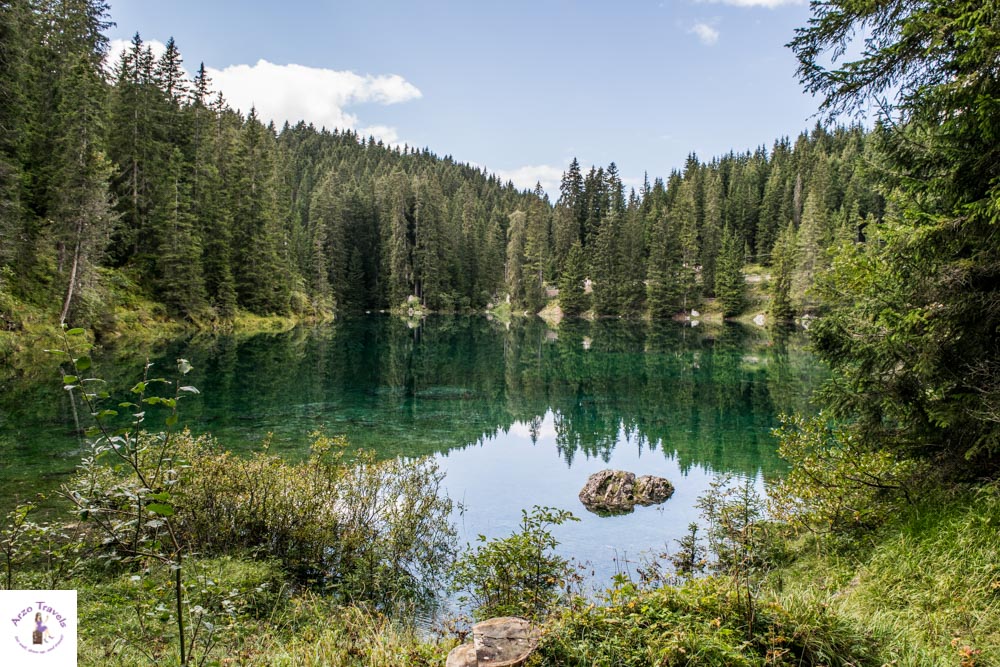 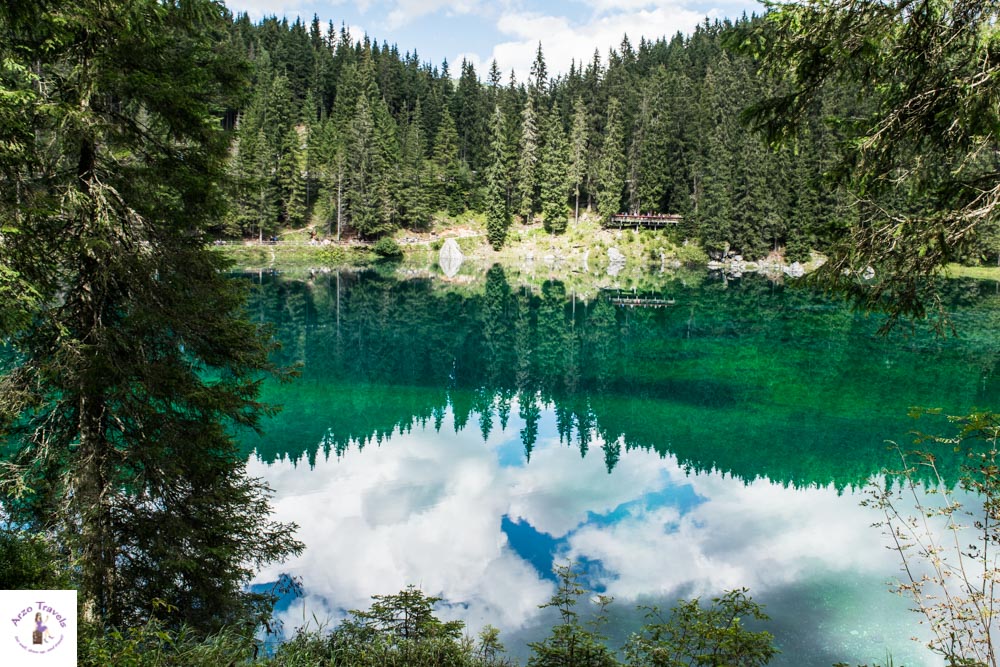 Shares
You can take an easy stroll and do a circular “hike,” which takes about 10-15 minutes. If you have time, bring some snacks along and take a seat on one of the benches – though I have to say that the most beautiful view is from the platform with the Rosengarten and mountains in the background.

Walking around the lake isn’t really considered a hike, but you can also hike in the area.

Actually, there are many hiking options, and I really regret not having hiked in the area.

Hike around the Rosengarten Massif – it is a circular route for experienced hikers and just one of the many hiking options in Carezza.

THINGS NOT TO DO AT LAKE CAreZza

Okay, there are a few things you should NOT do at or in Lake Carezza.

Bad news for the swimmers amongst you: you are NOT allowed to swim in the lake. You are actually not allowed to jump over the fence at all. And yes, if you visit early or late at night and no one is around, you could probably jump into the lakes. I hate when all travelers get a bad reputation because of a few reckless people. Do not be such a person. Be responsible and swim in a lake where it is allowed.

Sitting on “THE” Rock

I have seen quite a few pictures with people, mostly dressed up girls, on the big rocks just in front of the lake. I was sure I wanted to have such a picture of me (even though I wasn’t dressed up)…But when I got there, I saw a big sign that made it very clear that it is not allowed to cross the fence to sit on the rock.

Yeah, no cool rock picture of me, but I will survive it. And so will you if you do not get that picture (promise, trust me on that).

Take Pictures With Your Drone

Drones are not allowed, so no reason to carry your heavy and bulky drone with you!

Though I have seen several stunning and drop-dead gorgeous lakes in Italy during that road trip, Lake Carezza was probably my favorite. It is one of my travel highlights in Italy, even though many other people visited the lake, and it is surely not a hidden gem anymore.

But, in the end, it is understandable that people want to visit this place. Though I have read some opinions from those disappointed by the little water it carries, the beauty speaks for itself. Surely, I was lucky enough to see the lake when it was at its deepest, but I am sure it is a beauty at any time of year.

Here are more beautiful lakes in the Dolomites.

I hope you enjoy the lake as much as I did. Though getting there probably takes some time, it is definitely worth it!