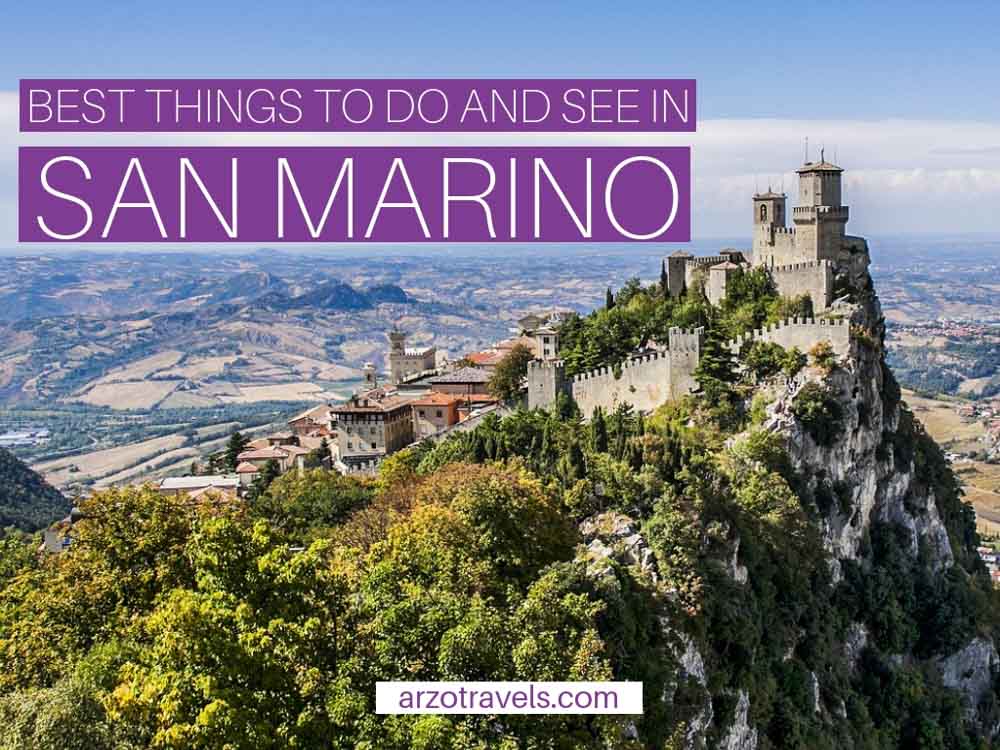 WHAT TO DO IN SAN MARINO IN 1 DAY

If you’ve been searching for the best things to do in San Marino in one day, this post can help you plan your trip. I’ve put together a list of the top attractions and not-to-be-missed activities for San Marino.

This tiny country, surrounded completely by Italy, got on my radar a while ago. So, I just had to visit on my recent Northern Italy trip! 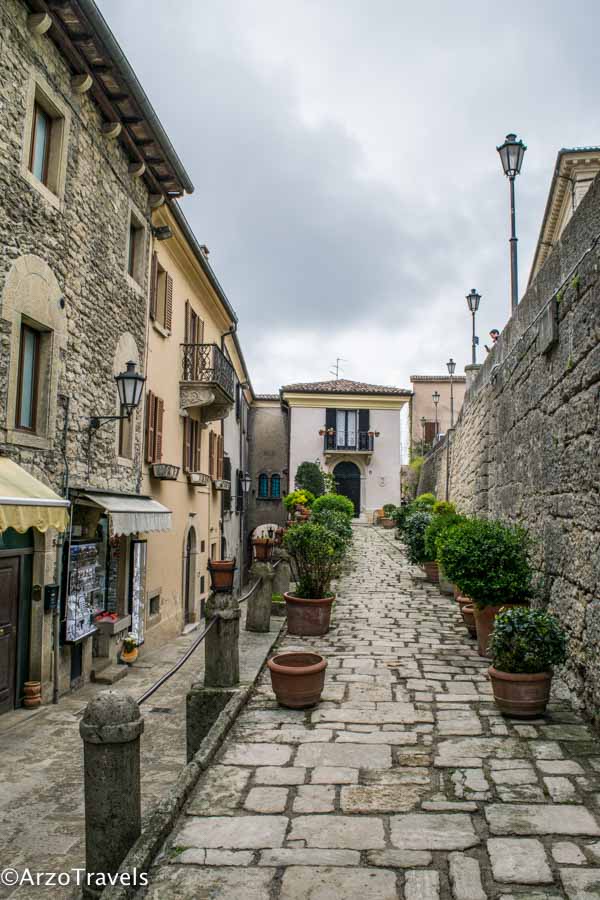 TRAVEL TIPS FOR ONE DAY IN SAN MARINO

But before talking about the main San Marino attractions, here are a few other things to know about the country.

How to Get to San Marino

If you’re planning to visit San Marino from Northern Italy, there are two main ways to get to your destination.

How to Get Around San Marino

If you only have a day or two in San Marino, you will most likely spend your time in the old town, which is uphill. So you will need comfortable shoes to get around easily. You can walk to many tourist attractions and will probably not need another bus, etc.

Where to Stay in San Marino for 1 Day

I picked a hotel about 700 meters outside of the old town. You get what you pay for, and while I‘ve gotten much better hotels for a lower rate, this hotel was kind of… not good.  The location was okay, but again, a 700-meter uphill walk to the old town was not great, and the hotel was not amazing – which was okay as it was not expensive by San Marino standards. But I would not stay there again.

However, it seems all hotels in San Marino are rated quite poorly – maybe it has something to do with the lack of language skills. So, my tip is to NOT stay in San Marino, but make Rimini your base and go there for a day (you really will not need more time, believe me). 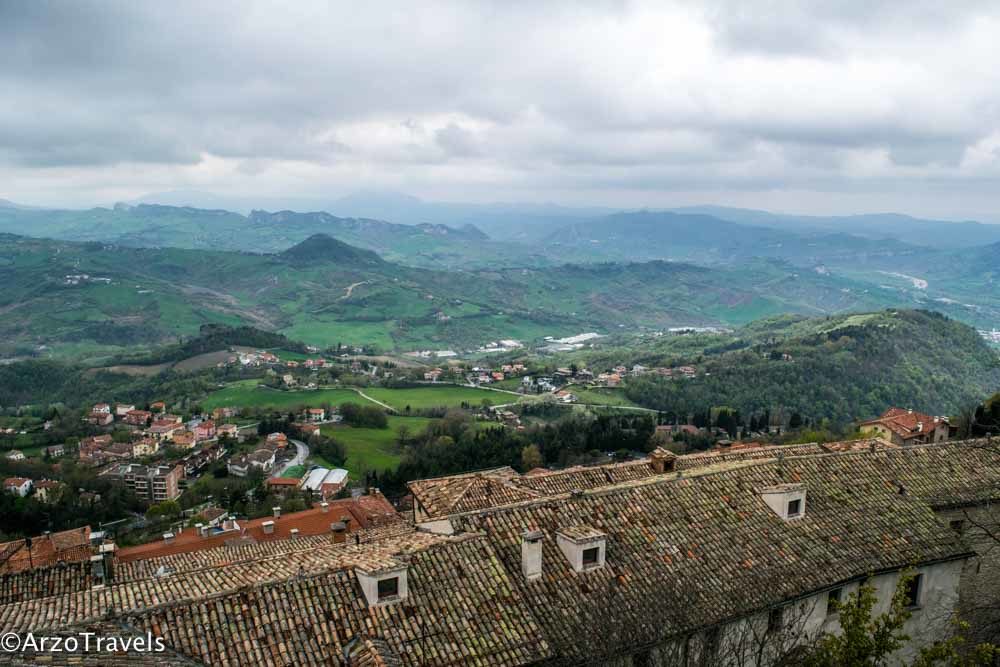 What Language Do They Speak In San Marino

Looking for people who speak English in San Marino is not the easiest thing. For example, even in the museums, the staff does not speak any English or any other language other than Italian. Not even at my hotel. It was even worse than my experiences in France.

I think that this really left a bad taste in my mouth because it was kind of disappointing. After visiting Italy, where many people in the tourism industry speak (basic) English, I could not ask anyone (except the women at the tourism office).

Many people in San Marino made up for it by being very friendly, but my tip is to learn some basic Italian beforehand.

I was traveling solo in San Marino – well, kind of. My little dog was with me, but in general, San Marino is super safe. The only downside was that people did not speak any English, and communication was limited to smiling.

Traveling With a Dog in San Marino

In case you didn’t know: I have the world’s cutest dog. I took him on my trip, and the reactions to him were similar to the ones we got in Italy: the people in San Marino love dogs, and you can take dogs to many places. 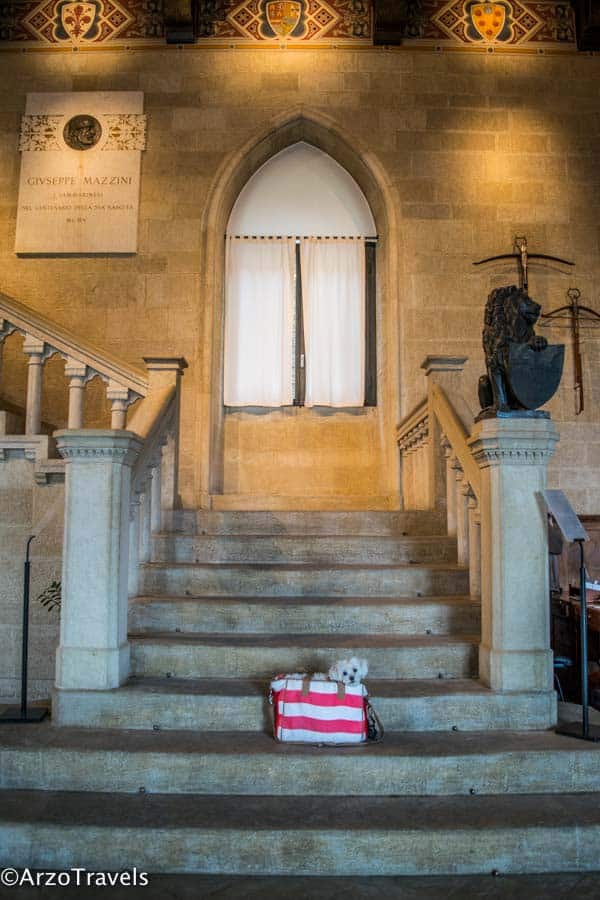 It might be a bit trickier with bigger dogs, but in general, I would say that San Marino is the dog-friendliest place in the world (even more dog-friendly than Italy).

Here are a few more tips for your day trip to San Marino. 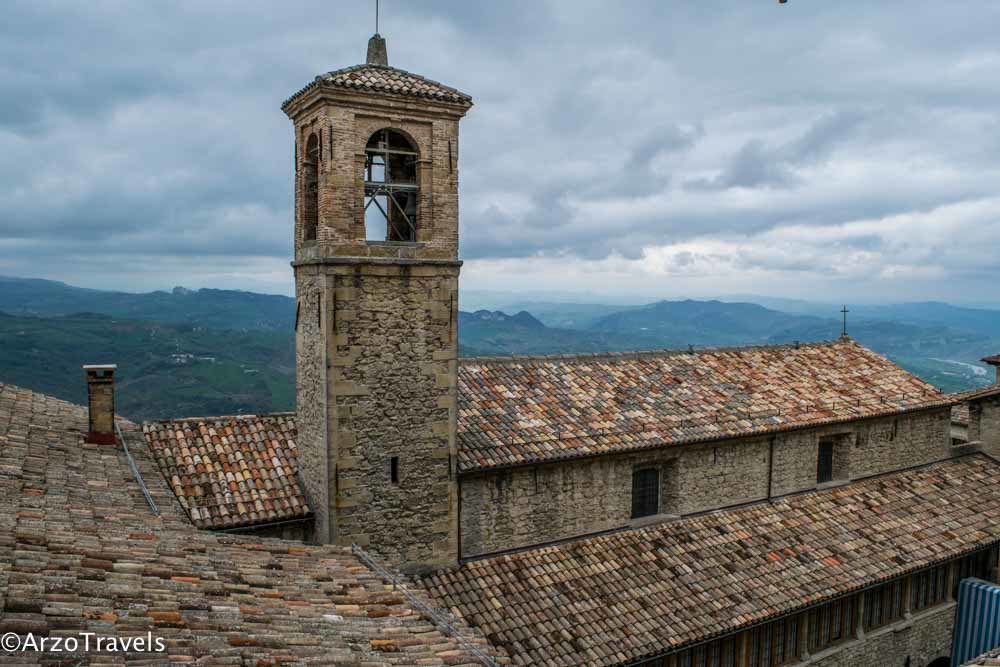 PLACES TO VISIT IN SAN MARINO

Okay, here are my tips on how to spend a day in San Marino.

The best thing to do in San Marino is to head to the two towers (the third tower is not accessible to the public).

Rocca Guaita and Torre Cesta are two fortress towers you can visit, and they are situated on a ridge at the summit of Mount Titano. 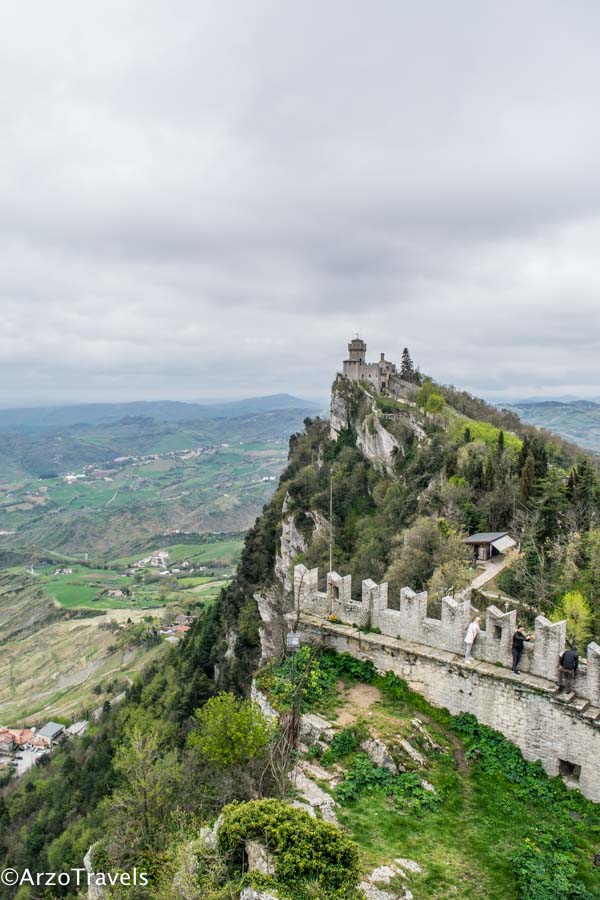 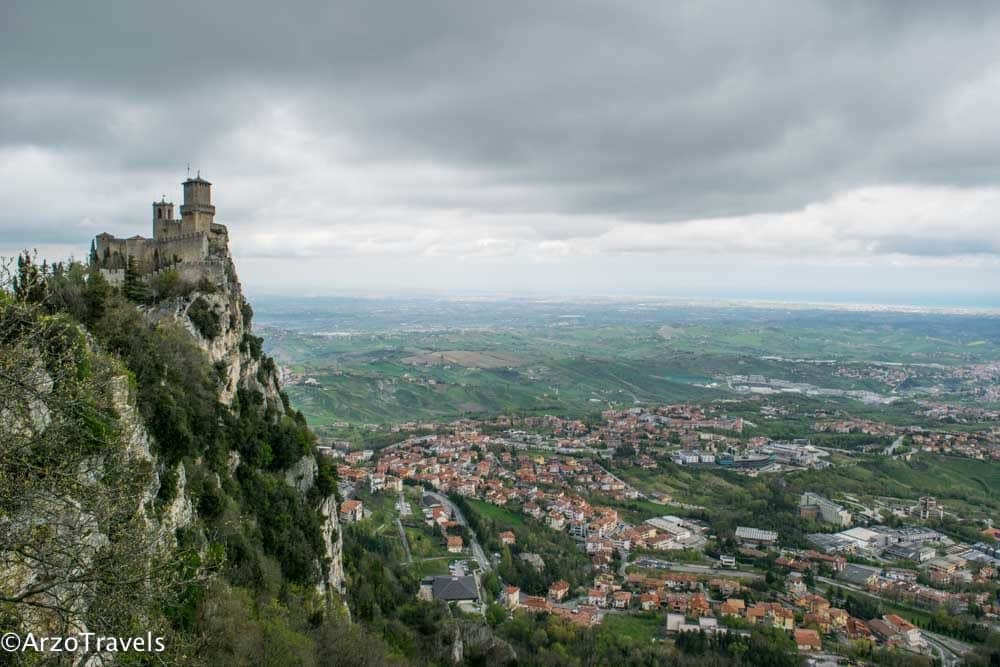 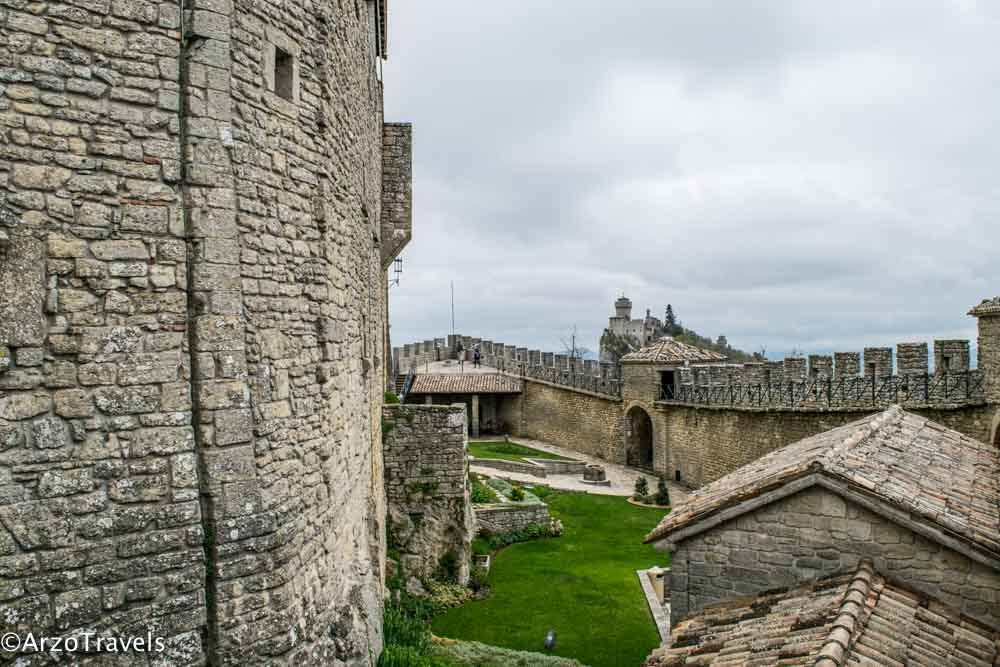 To get to the towers, you have to hike a bit. Getting up to the first tower – Rocca Guaita – takes probably only 15-30 minutes, and though it is uphill, it is not too challenging and does not include many stairs.

Even if you don’t enjoy hiking up, it is worth it. You can access most (maybe even all) parts of Rocca Guaita, the oldest and biggest of the three fortresses.

Rocca Guaita dates back to the 11th century. From there, you have amazing views of the second tower and also of San Marino´s beautiful scenery.

It was used as a prison as recently as 1975, but I did not even realize that at my visit.

From there, head to the second tower.

Torre Cesta is the second fortress and dates back to the 13th century. It now also has a traditional weaponry museum where you can see weapons from the 13th century and sits atop Monte Titano, at 750 meters above sea level – again, great views from here.

If you want, you could head to the third tower, which is not accessible to visitors but you can get close to it.

Montale was built on Mount Titano around the 13th century as well. I stopped my hike after the second tower, but if you are in the mood for a bit more walking and hiking, you might enjoy the walk to the third tower.

Along the way, you will find some stalls and restaurants.

After that, it is time to explore the old town and more San Marino sights and attractions.

The town hall of San Marino and its official governmental building, Palazzo Pubblico, is located at Piazza Della Liberta and is the eye-catcher of the square with its Gothic style and ornate facade. These are two must-see San Marino points of interest. 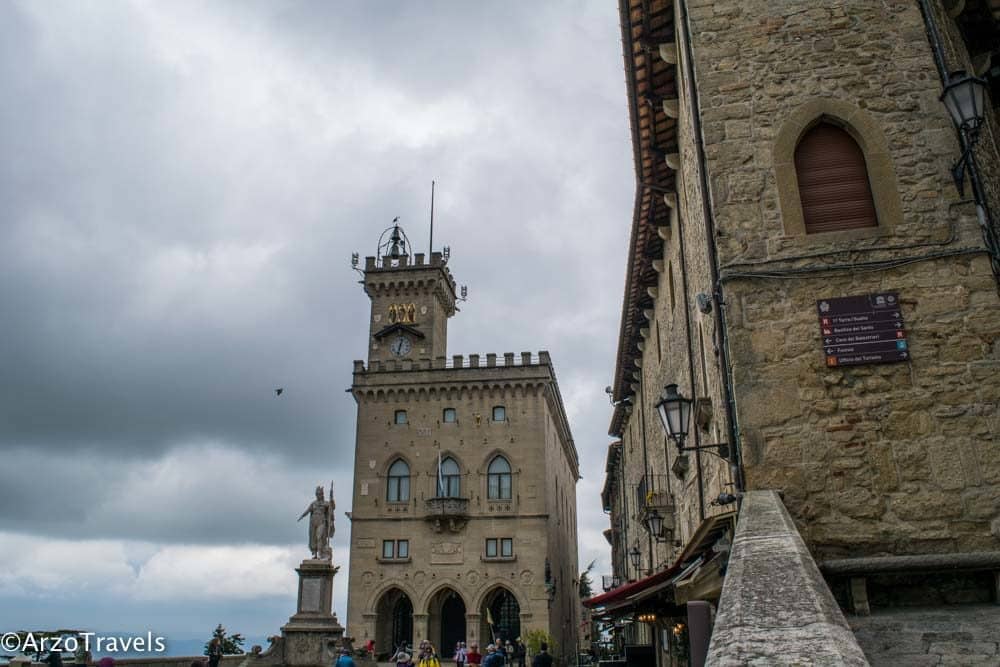 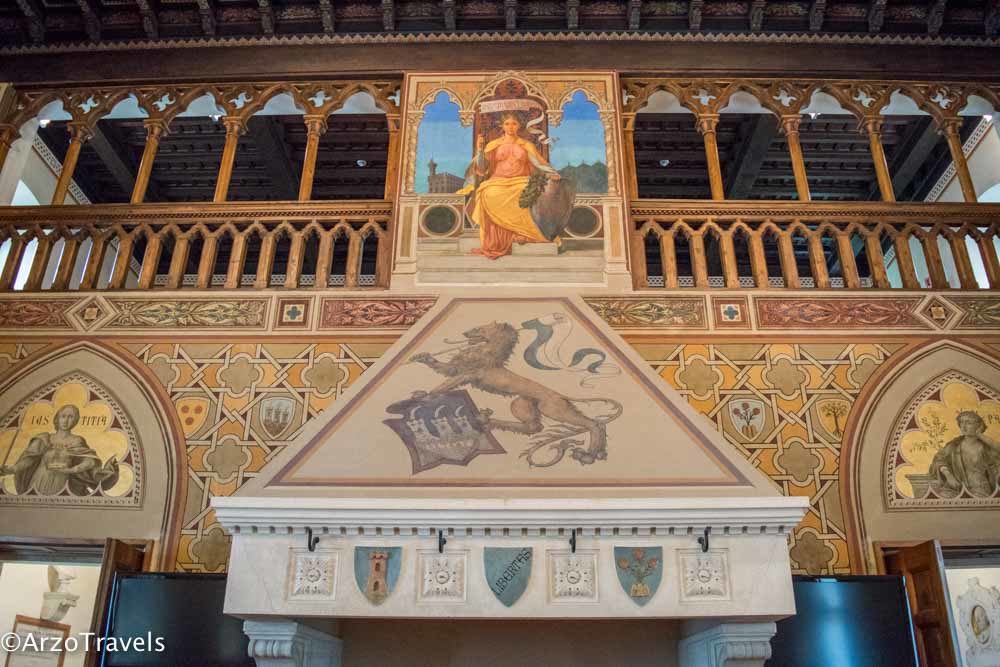 Main government events and ceremonies take place here. If there is no event, you can visit it and learn about San Marino´s history (a short video is shown).

It is probably one of the most remarkable buildings in the country. When you look at it from the outside, pay attention to the square clock tower that tops the building and features battlements that echo Palazzo Vecchio in Florence.

As mentioned, the town hall is located in this piazza (which also offers some nice views), but you can also watch the guard ceremony’s changing with the Guardie di Rocca. I’d recommend adding this to your list of things to see in San Marino, if possible. 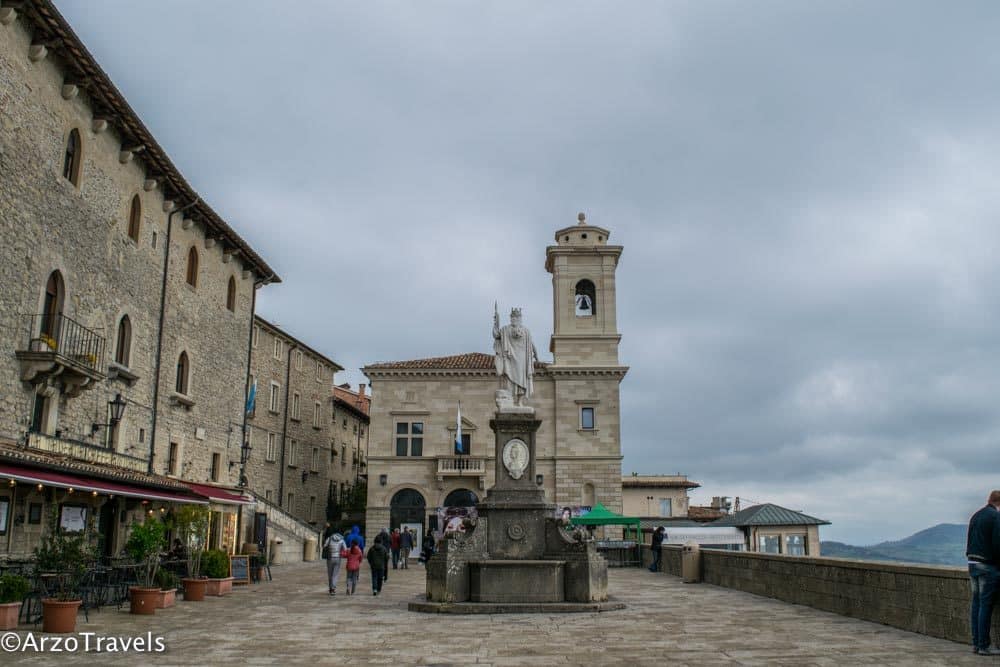 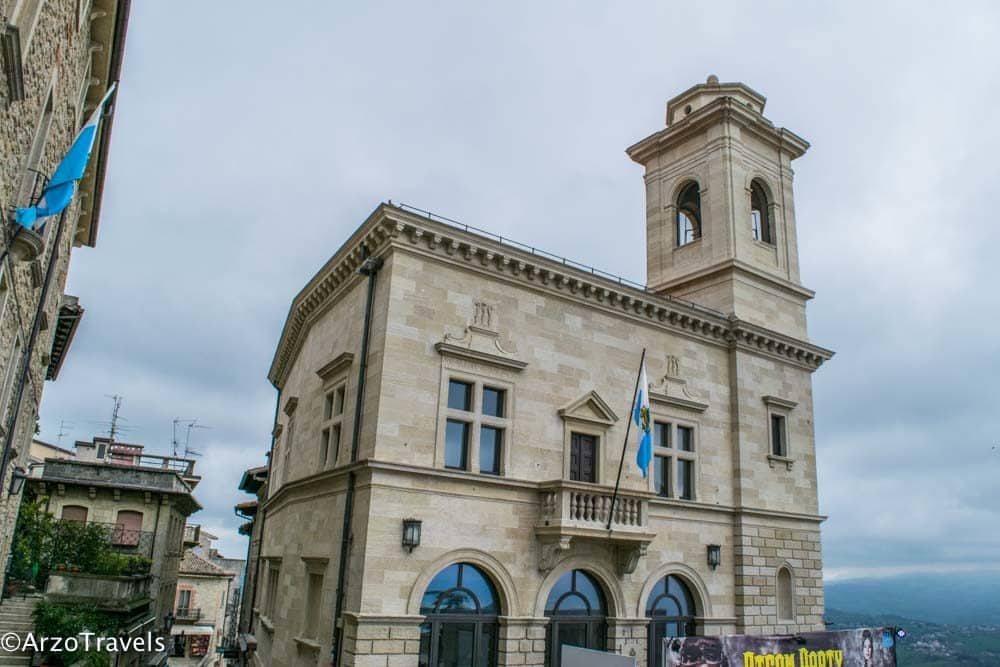 I did not get to see the Changing Guards during my visit, but the Guardians wear green uniforms and red pom hats, and the changing of the guard takes place every hour during the day in the summer months.

I’d imagine it’s one of the more popular tourist attractions in San Marino during the season.

I recommend visiting Museo di Stato for history fans, which you will find inside the Palazzo Pergami Belluzzi.

San Marino has quite a few museums, and one of them is the Museo di Stato.

It is very small, and if you don’t look at each piece for a minute or so, you will finish in 20-90 minutes.

The Basilica di San Marino is a beautiful religious site and it is also located in the old town. 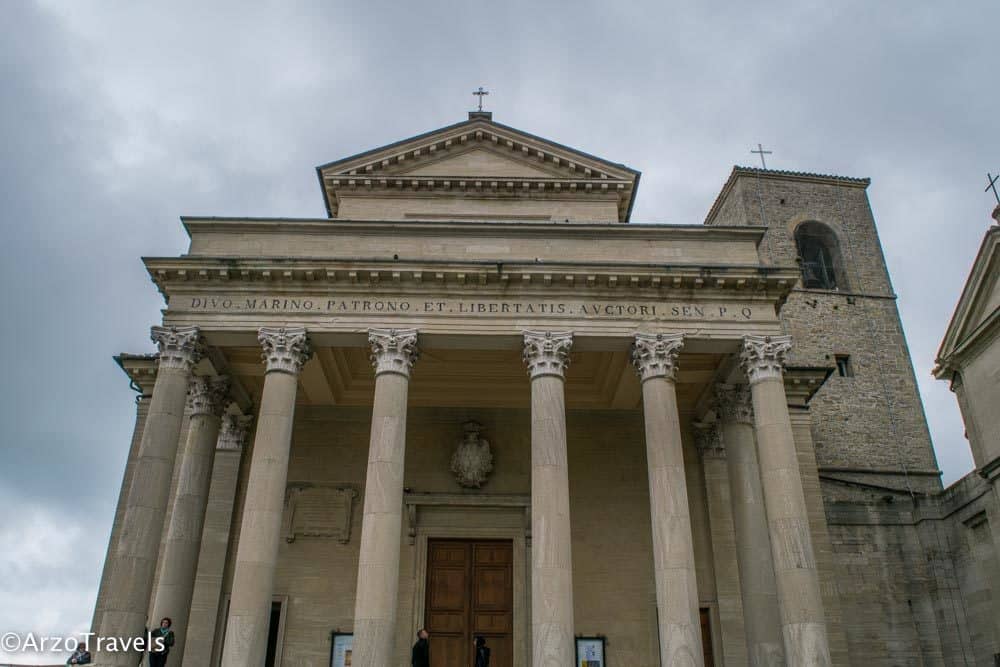 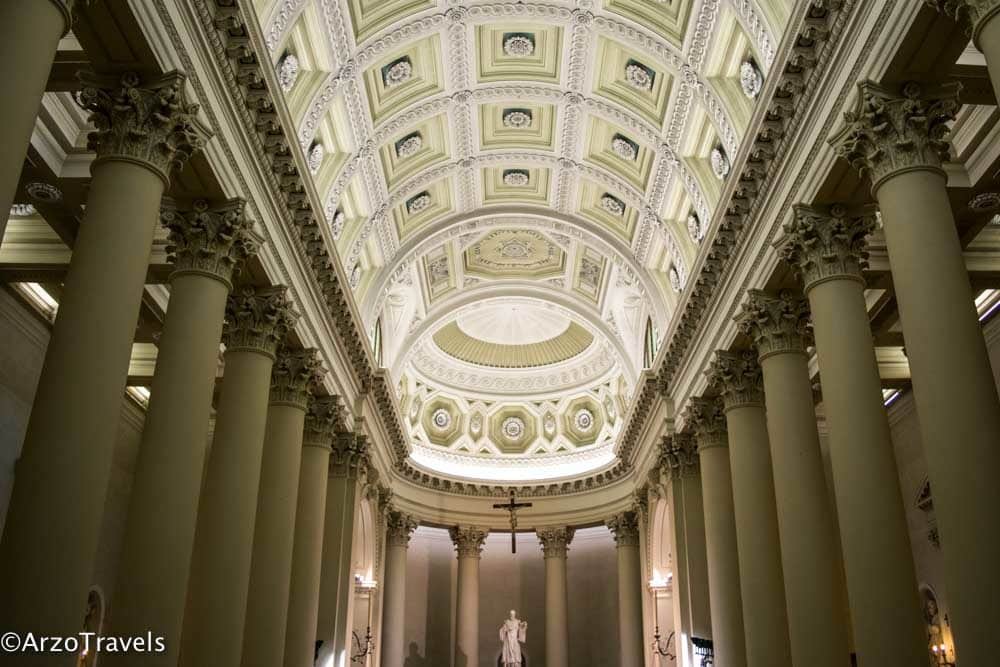 It was built in the 19th century upon a Roman church’s remains that originally stood in the fourth century. It has a beautiful but quite simple interior and houses the bones of the patron saint of San Marino, Saint Marinus.

Other than the above-mentioned activities, I recommend strolling the cute streets of the old town. 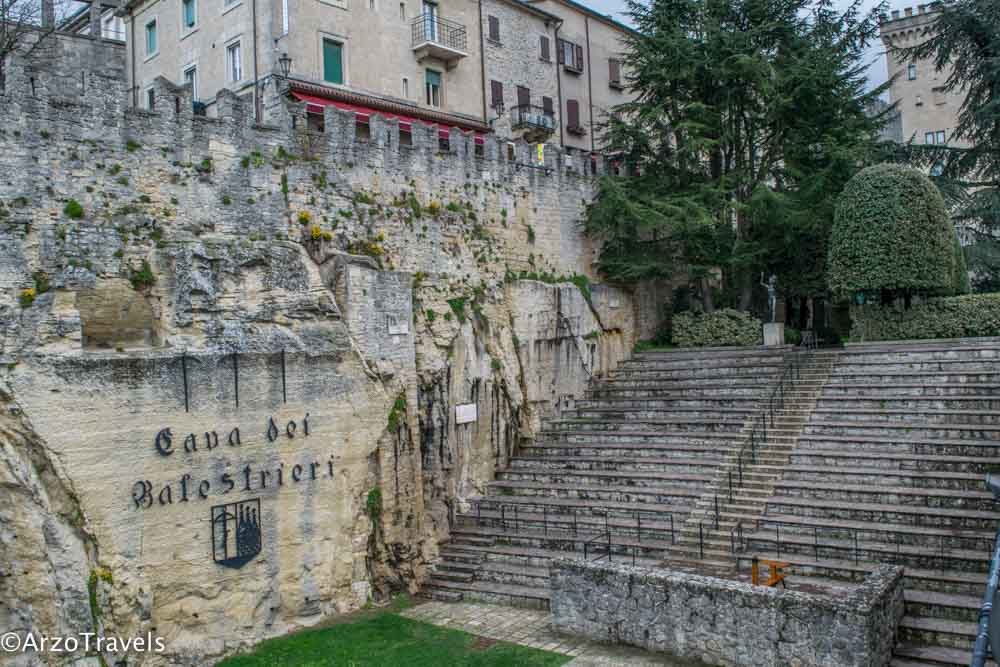 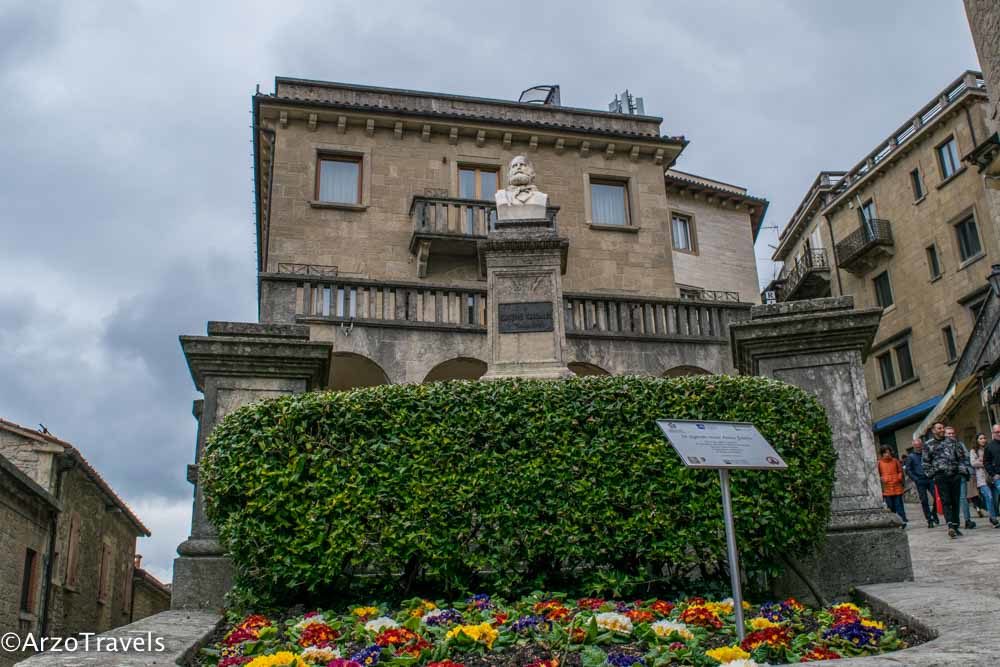 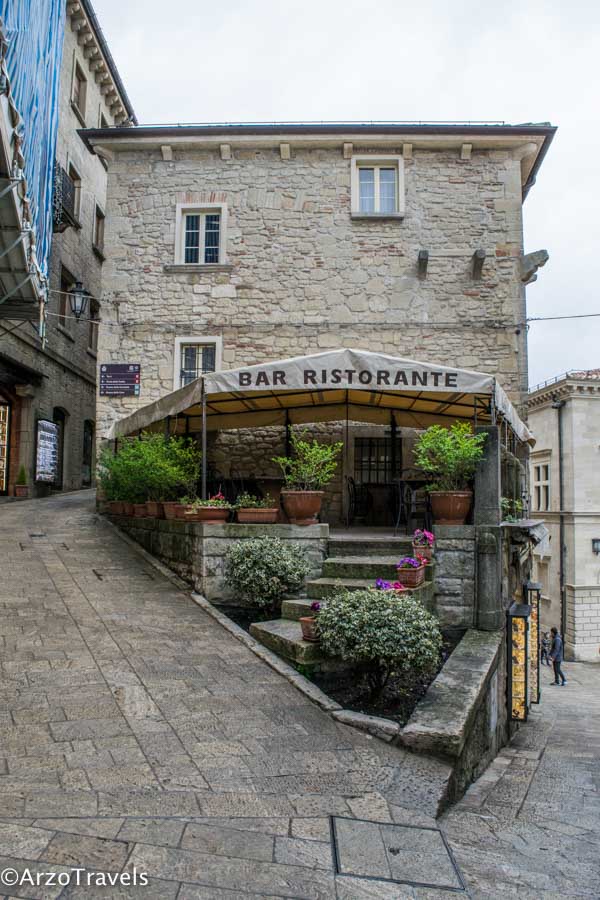 Often, I aimlessly walk around (if I am not in a rush), and with one day in San Marino, you should have enough time to do so yourself. You might stumble upon Cava dei Balestrieri or other cute places, but the highlights of San Marino have already been mentioned above.

THOUGHTS OF 1 DAY IN SAN MARINO

So, while I had a nice time in the country, I believe that one day in San Marino in this small country is enough.

If the weather had been better, my opinion might have been different (with chances to enjoy more cafes outdoors and enjoy San Marino as a whole in a different way). But regardless of the weather, San Marino in 1 day will allow you to do the best things to do in San Marino.