Best Things in Zagreb in 2 Days – An Itinerary 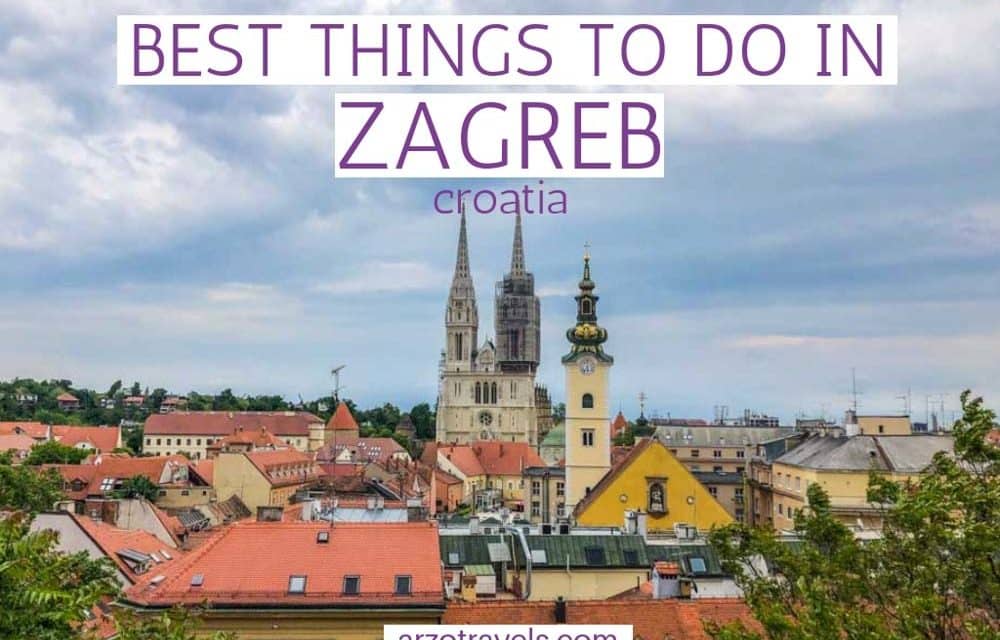 Best Things in Zagreb in 2 Days – An Itinerary

Are you planning your Zagreb itinerary and wondering about the best things to do in Zagreb in 2 days (or 1 day)?

Then this 2-day Zagreb itinerary is for you. Find out about what to do in Zagreb in 48 hours — where to go and what to see, plus some travel tips.

Croatia´s capital is a fun and lively city that offers quite a few attractions and has some beautiful places to visit.

However, I admit that even I was hesitant to visit Zagreb when I road tripped Croatia with my little dog for about two weeks.

I was not afraid that Zagreb would turn out to be a boring city – my hesitation was more because of its location.

Let´s face it – Zagreb lies in the northern part of the country. And while other tourist attractions and main places to visit, like Split, Dubrovnik, and Hvar, are quite far, Zagreb is quite “remote.“

So, with only one week in Croatia (or less), I would probably advise you to skip it. However, if you stay longer in Croatia or plan to do a city trip, then Zagreb is a fun place to visit, and 2 days in Zagreb is a perfect amount of time to get a good glimpse of the city.

And Zagreb might surprise you. It is different from other places in Croatia. Actually, it reminded me more of Austria or Hungary (no surprise, given its history) with its beautiful buildings and architecture.

So, enough talking – let’s dive in and find out about how to spend 2 days in Zagreb.

Let´s start with attractions in the Upper Town and what you will find there.

The oldest part of the city is a little city dream, with its many cobblestone streets stretching between two hills – Kaptol and Gradec.

First of all, how do you get to the Upper Town? Don’t worry, it might sound like you would need to do a tedious hike/ride up, but it is quite easy to get from the Lower Town to the Upper Town

Ride the Shortest Funicular in the World

To get up to the Upper Town, you could just take the funicular – apparently, the shortest funicular ride in the world. It takes less than one minute and costs less than $1 to get up. 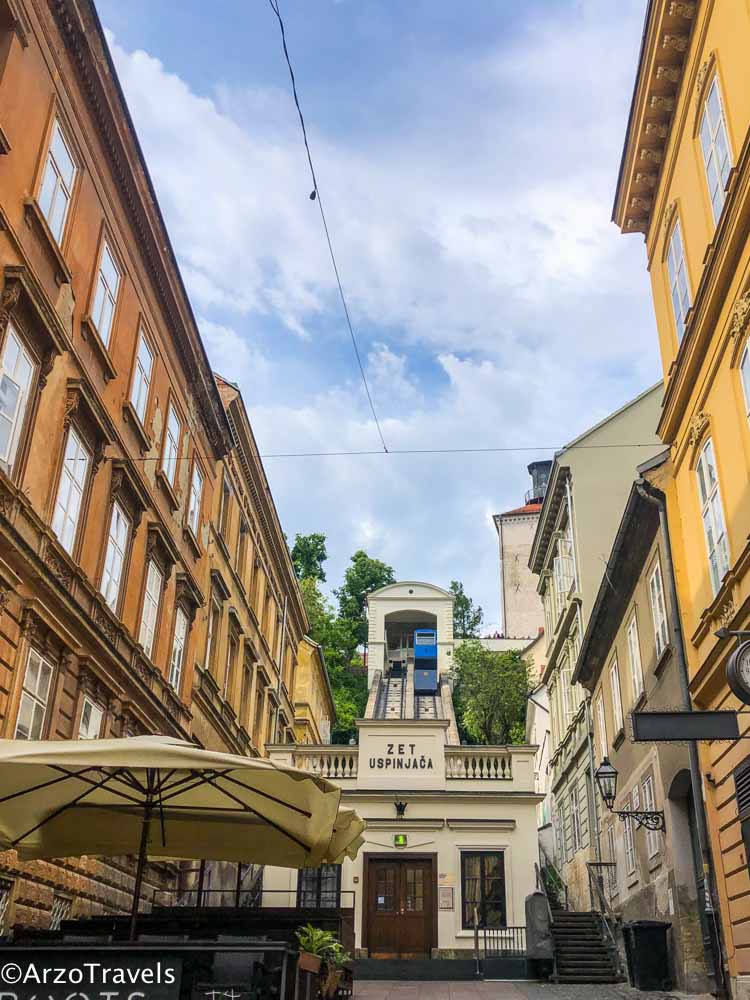 The funicular runs frequently. I walked up, but many people use the funicular for a quicker ride and it has become a main tourist attraction itself.

If you get up via the funicular (or climb the stairs), you’ll see one of the oldest buildings in Zagreb: Lotrščak Tower. 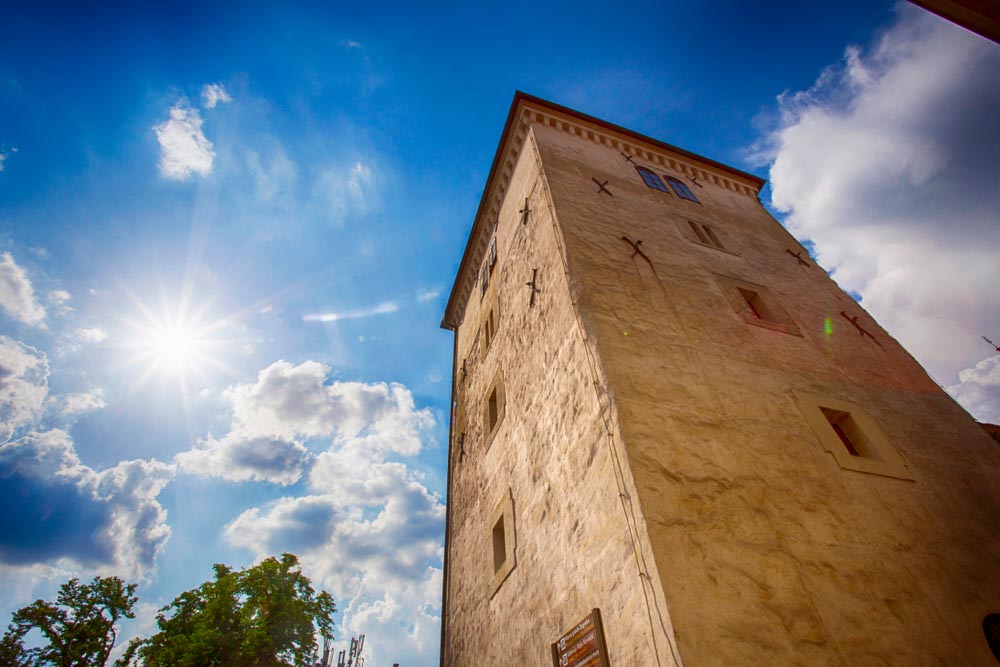 It was a part of the southern gate and town defenses, dating back to the 13th century.

I admit that I just passed it even though it is one of the main tourist attractions in Zagreb, as it is one of the last remaining fortifications in the city. Probably because I wasn’t around at noon. Tt noon every day, there is cannon fire. That tradition started more than hundred years ago as a victory sign against the Ottomans in the 13th century.

What I somehow was not aware of is that you can climb the (narrow) stairs and enjoy even more elaborate views of Zagreb from the tower.

Entrance fee is around $3.

If you get up via the funicular, you arrive at the Strossmeyer Promenade – one of the most romantic promenades in Zagreb. Not that I have checked them all, but according to the locals. 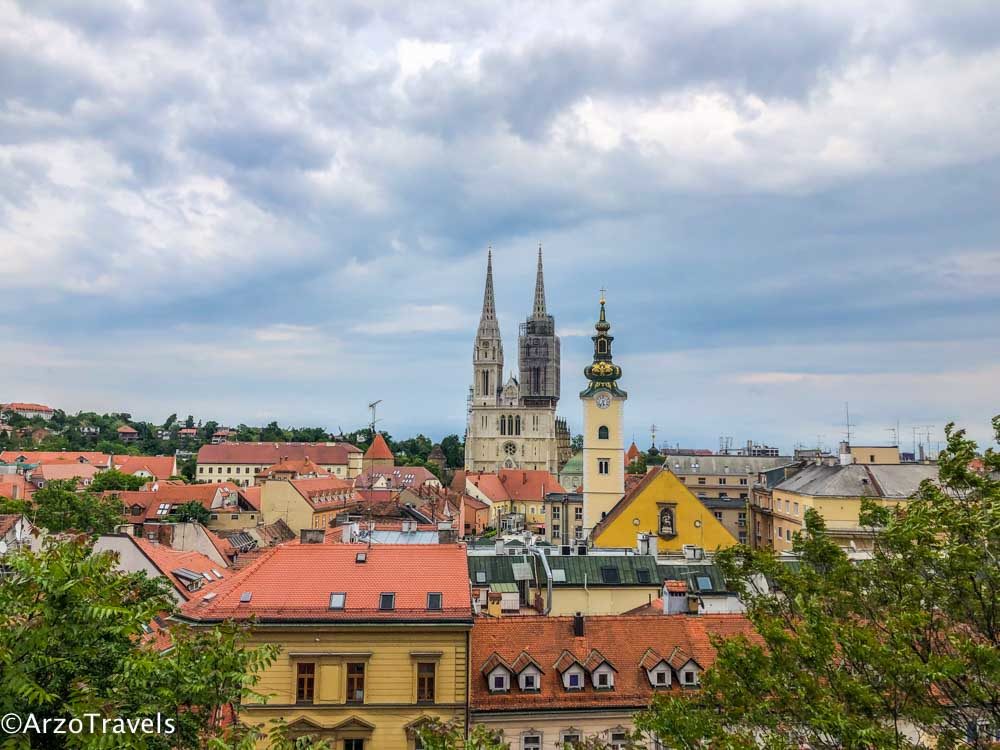 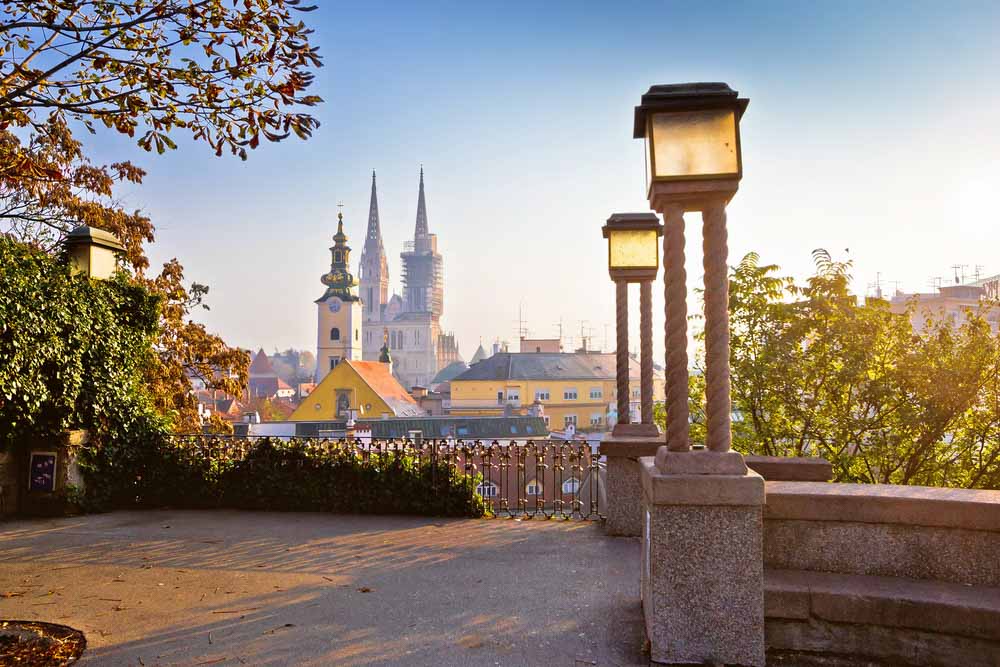 Also known as Zagreb Stross, it is filled with many chestnut trees and you’ll also find benches.

It runs along the remains of Zagreb’s medieval defensive walls and offers beautiful views. Make sure to walk all the way to the end to have a great view of the Zagreb Cathedral.

In Croatia, you’ll find many churches – so what makes St. Mark´s Church stand out? Well, let me show you with this picture. 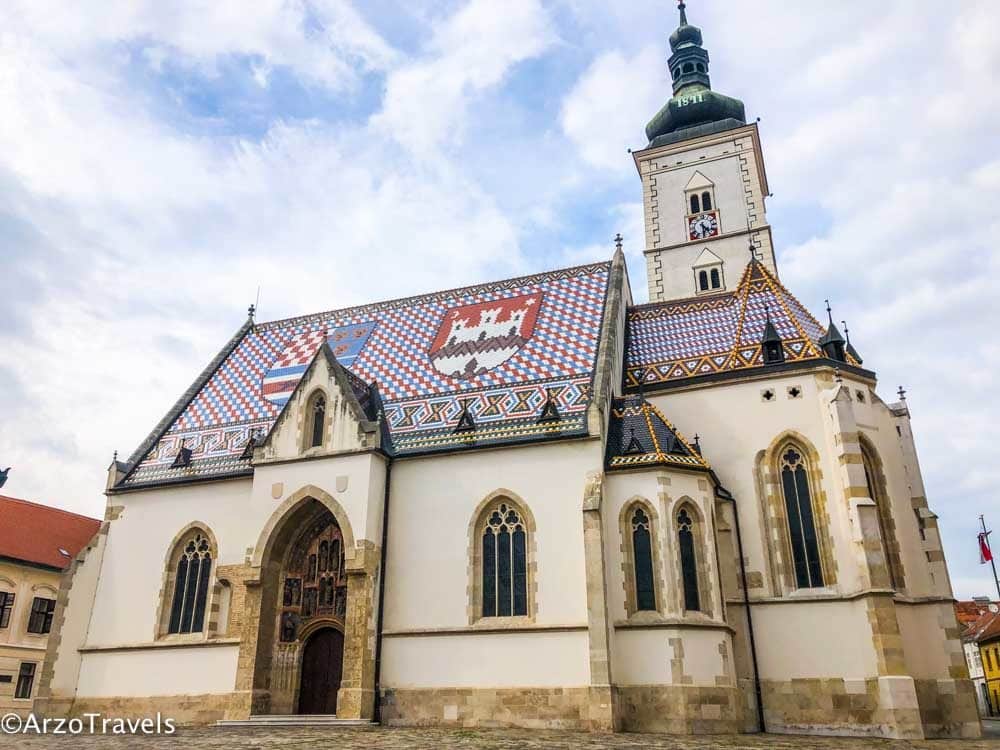 Such a colorful, tiled roof is surely unique – I have not seen any other church roof similar to this and so it does not surprise me that it has become an icon in Croatia.

The church dates back to the 13th century – the roof was constructed in the 1880s though – so it is also one of the oldest churches in the country.

You can visit the interior for free if you attend the daily mass. It is not open most of the time, so check out mass times.

If you visit between late April and October – and on the weekend – you can watch the guard changing ceremony that takes place at noon.

Grič Tunnel was built during World War II, with its primary purpose to shelter civilians from bombings during WWII and the Croatian War of Independence towards the end of the 20th century. 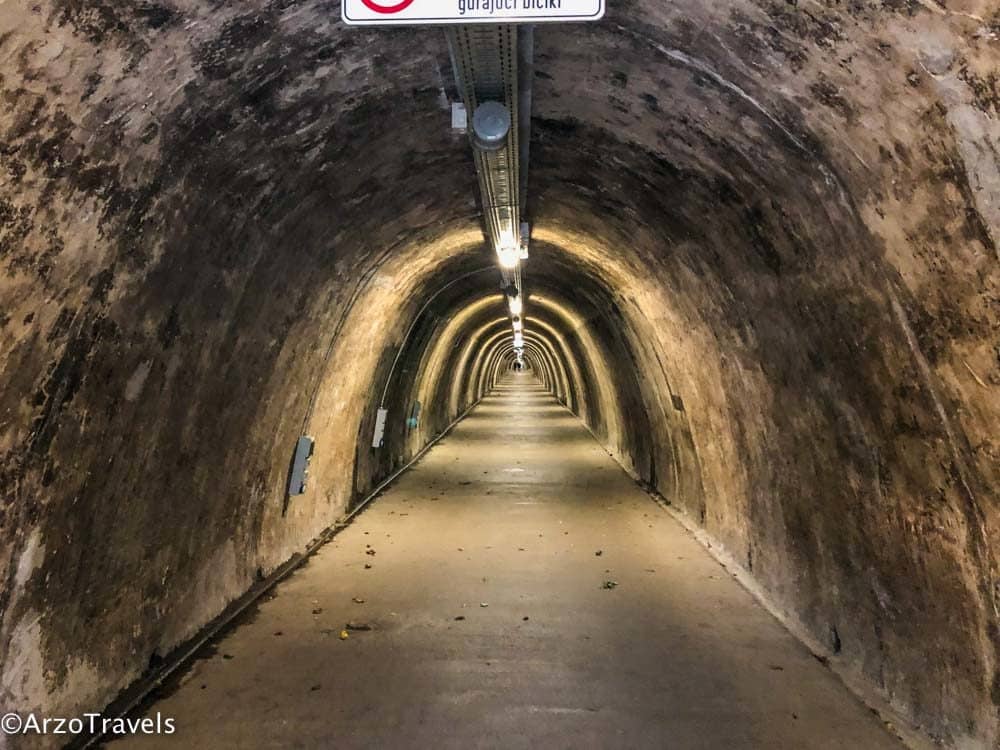 There is no entrance fee – and best of all, you’ll also find toilets there.

But that aside, this has become a major tourist attraction. You can walk the 350-meter-long tunnel now and once in a while even events take place there.

There are several entrances:

If you walk the tunnel, you can get out at the Art Park. I admit, though it was listed in many posts as a top place to visit in Zagreb, I would skip it on my next visit. 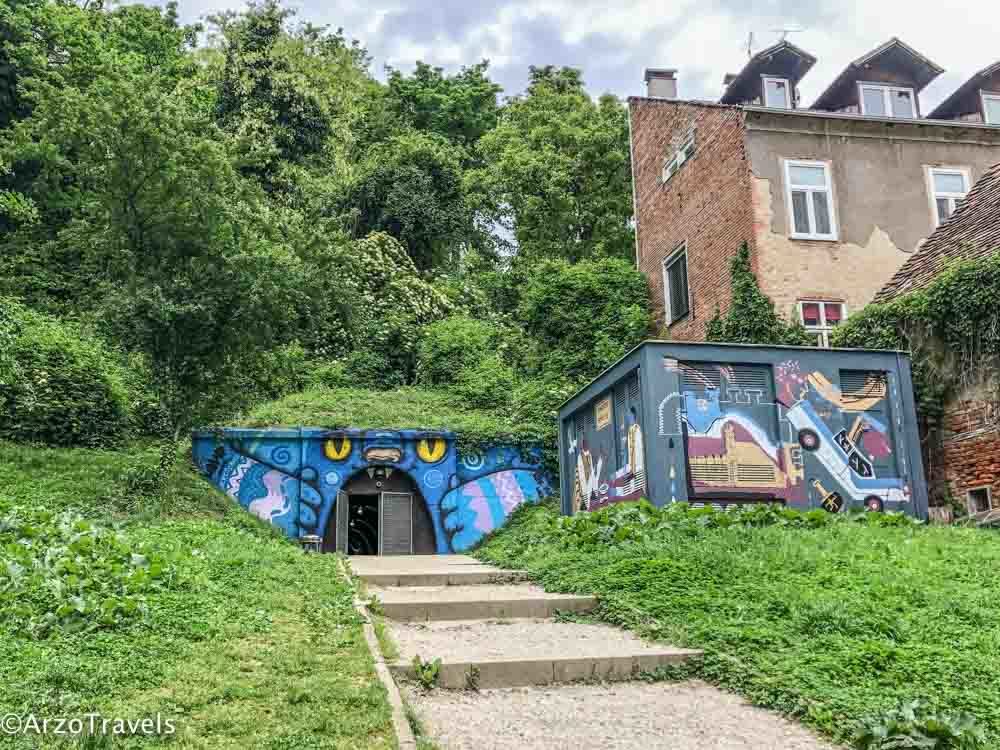 However, if you are into quirky art or just need a little park to rest in, then the Art Park might be the perfect place for you.

Also, if you are with children, you might want to check out this little park that hosts some interesting outdoor art pieces. If you are short on time or aren’t overly into art, then it probably is not a must-see in 2 days in Zagreb.

Dolac market is the city´s main, open-air farmers’ market and popular amongst locals and visitors. You can shop for some fresh fruits or bread (and many more things) every day from 7 am. On Sundays, it is open until 1 pm; on the other days, it is held until 3 pm. 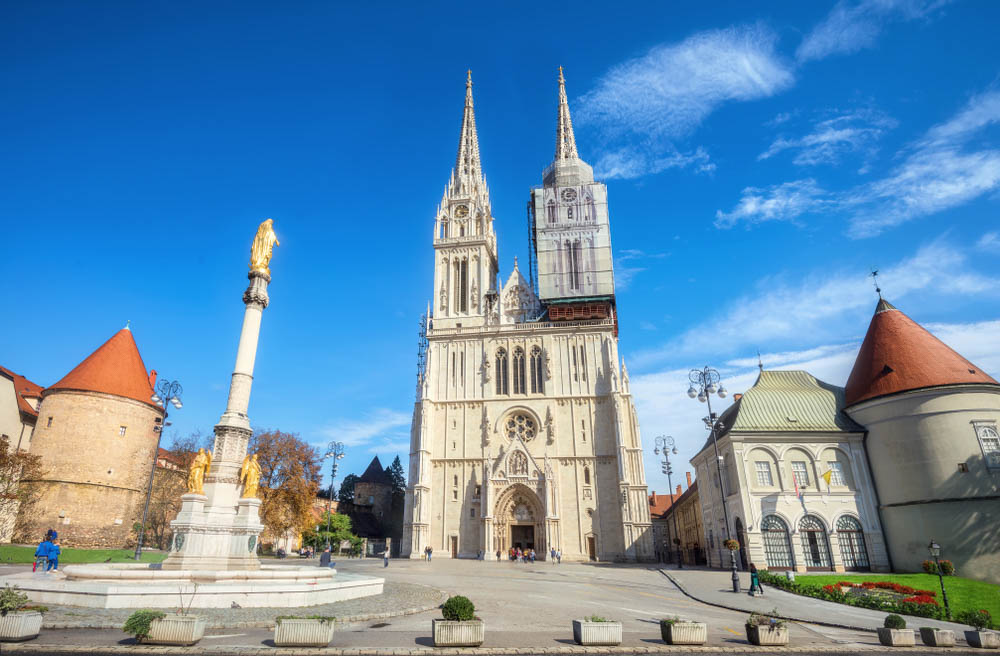 It is the tallest building in Croatia and is located on the Kaptol Square – but you can see it from afar because of its twin, 108-meter-high (354 ft) spires.

The Cathedral has been there since the 11th century, though it was severely damaged several times – the last big restoration took place in the late 19th century.

You can visit the church during the day and visitors are more than welcome to attend the daily masses.

This pretty street is a must-visit place in Zagreb. Vibrant and full of restaurants and small shops, it is extremely popular amongst visitors.

But don’t just sit down in one of the restaurants – make sure to look at the colorful houses behind the bars and shops.

Fun fact: This street used to be the first real red light street in all of Europe and almost every house here used to be a brothel.

Visit the Museum of Broken Relationships

This is probably the most famous museum in the city. However, I still did not go, but it seems to be one of the best places to add to your Zagreb 2-day itinerary. 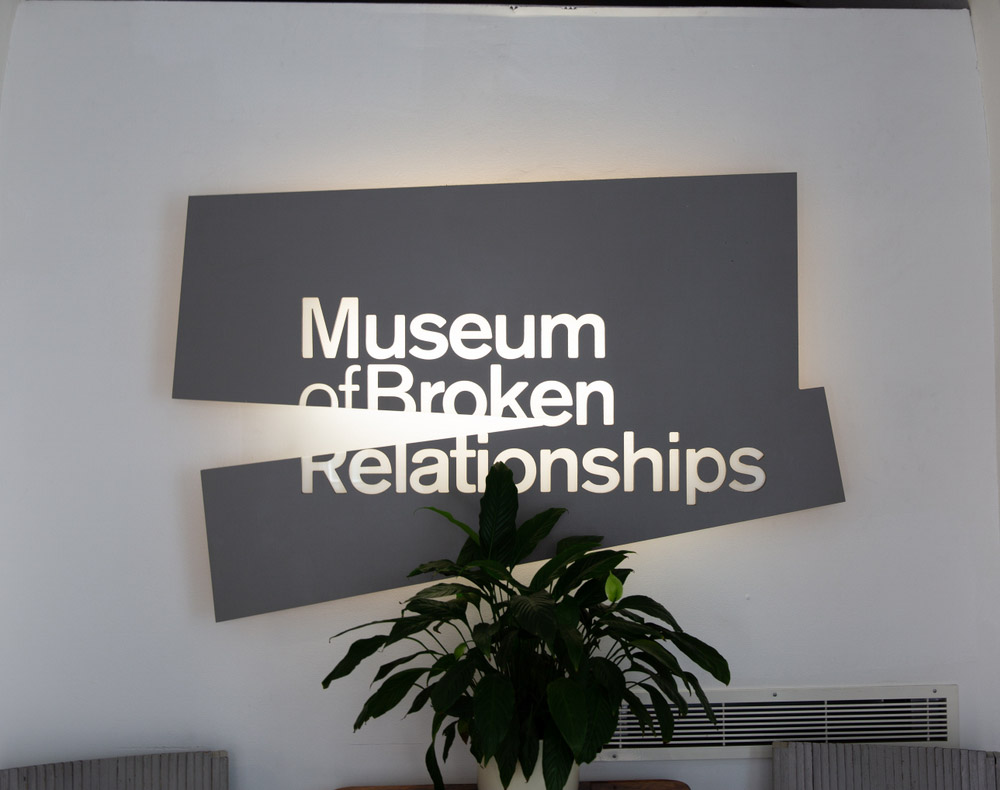 What I haven’t mentioned yet is that Zagreb is also known as the City of a Million Hearts – it is all about love here.

The museum is actually about failed love relationships and so it exhibits personal objects left over from former owners, accompanied by their stories and emotions.

There are several ways to get to the Upper Town – one is via the Stone Gate (Porta di Pietra). 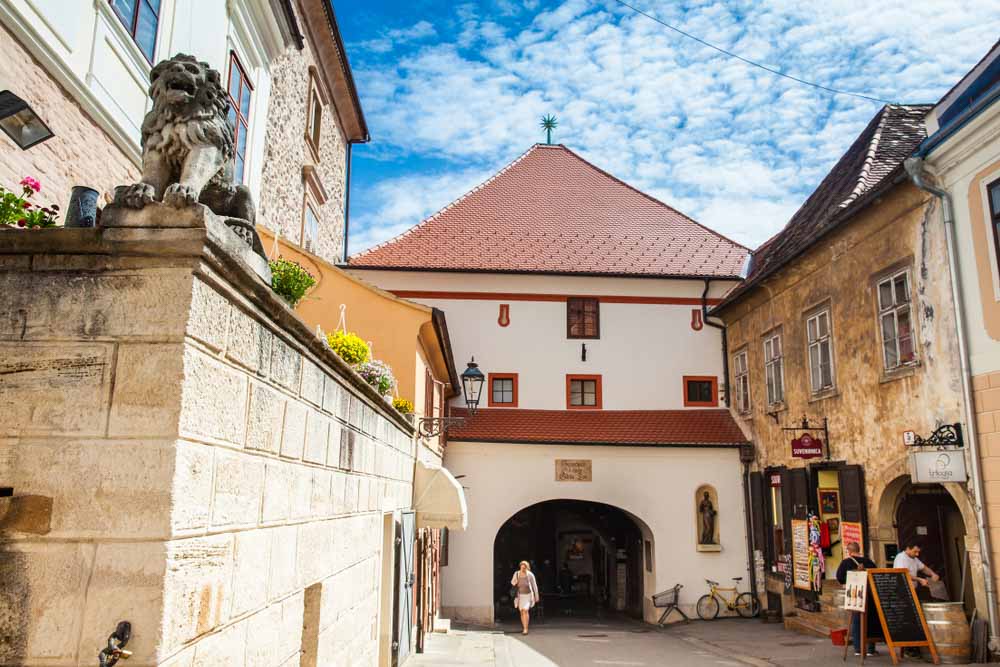 It is the only remaining entrance of Zagreb’s old fortifications and the eastern gate to the old town.

It also dates back to the 13th century, and if you go through the gate nowadays, you will find a shrine and stone slabs praising the Mother of God.

I saw quite a few people lighting candles and thanking the Lady for protection.

Apparently, on Tuesdays at 8pm, locals pray and sing here and visitors are welcome to join.

From there, you are within minutes of the lower town of the city.

Of course, it really depends on your speed and if you visit the churches and the museum, but you can easily spend one day in the upper town of the city.

Then, you will have one full day to spend in other parts of the city.

There used to be a time when I thought doing cemetery sightseeing was weird – and then I started traveling more in Austria, where cemeteries are often main tourist attractions, like in Hallstatt or Salzburg. 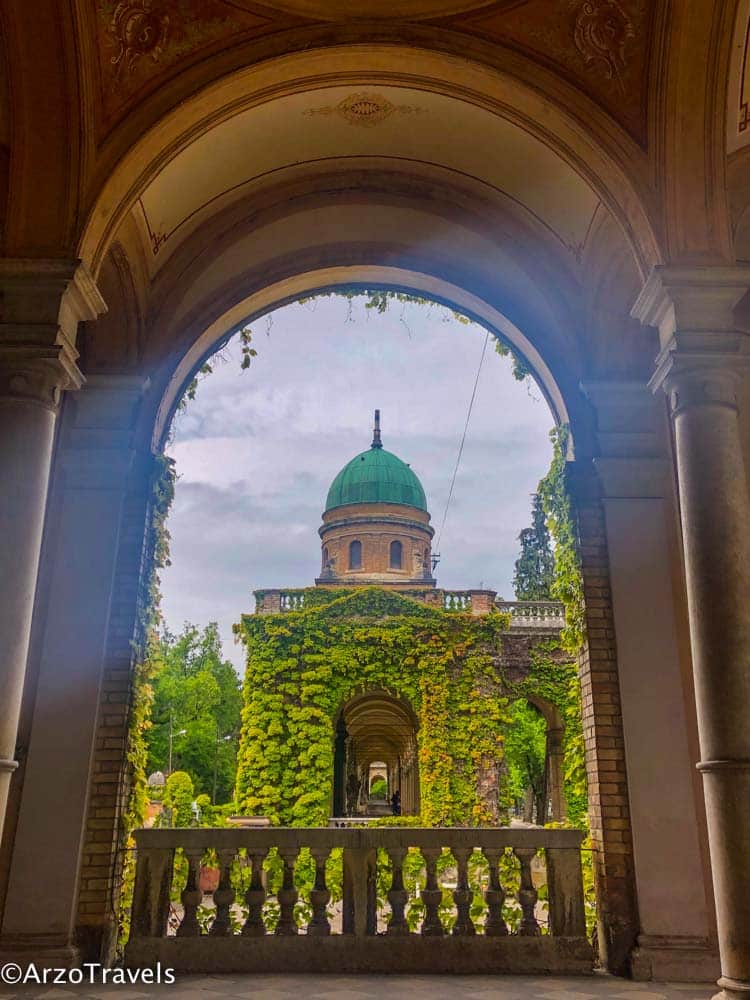 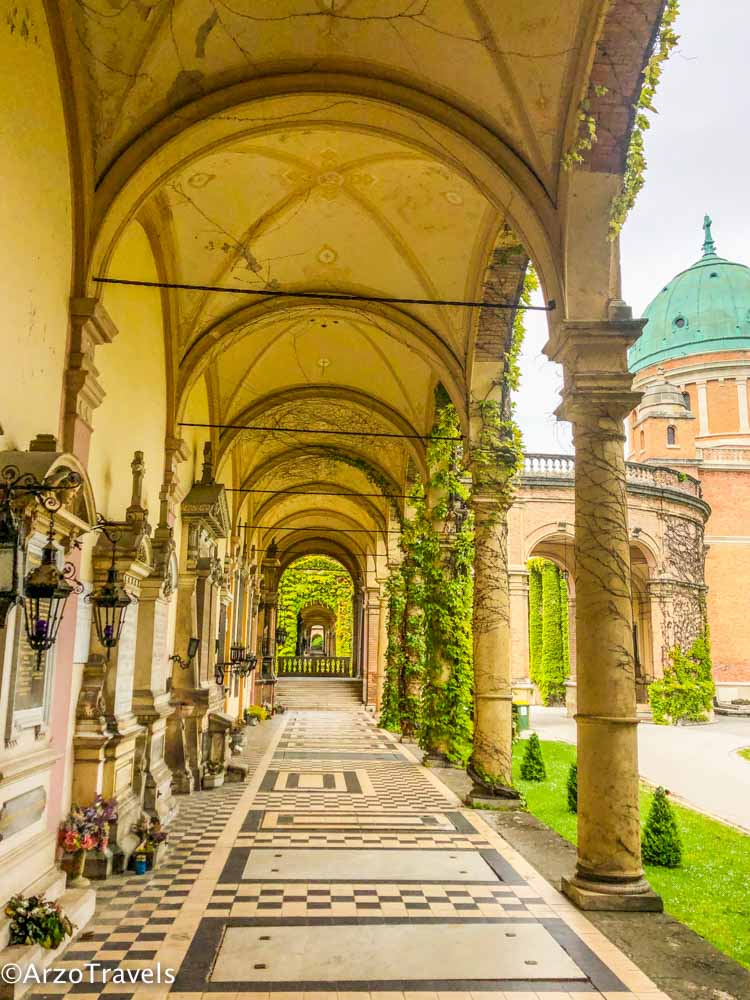 And it seems that the Austrian influence is strong here, as one of the most beautiful cemeteries is here in Zagreb: Mirogoj Cemetery.

It is a cemetery, but also a beautiful park and an open art gallery. The beautiful buildings are mostly covered by greenery and it is really a very photogenic place (or as it is called nowadays, “Instagramable”).

You can freely walk around. If it were not for the graves and statues, I would have a hard time believing it is a cemetery. Many famous people are buried here, including many of the country´s politicians, nobles, poets, and artists.

Zagreb Eye is an observation deck and a Viewpoint Bar. It is situated on the top floor of the iconic Zagreb Ilica Skyscraper and you can have great views from there. 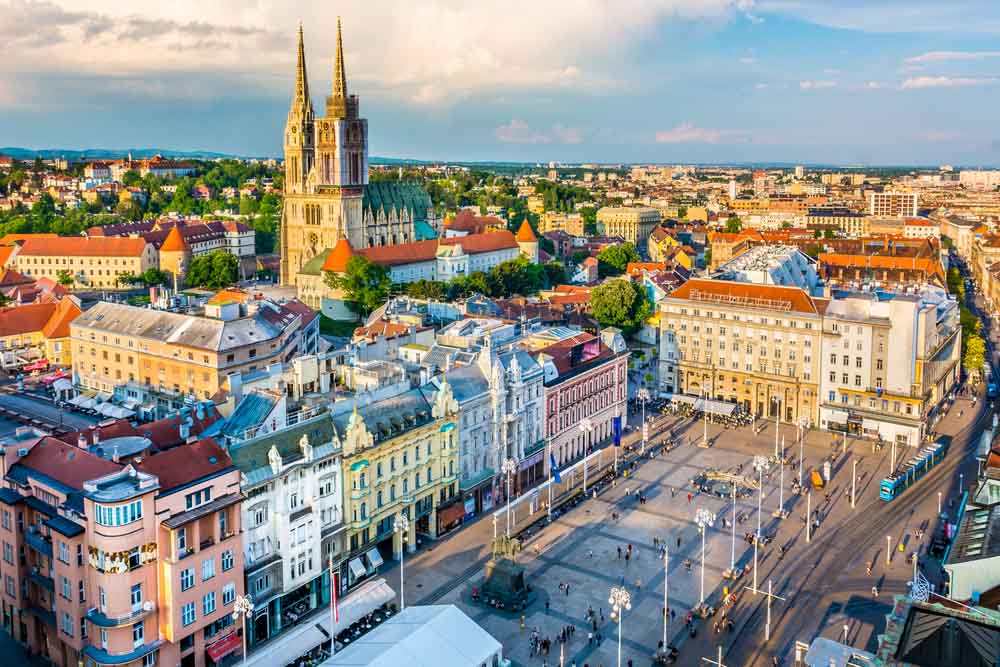 However, with two days in Zagreb, I do think it is a perfect place to end your itinerary – right at the bar with a drink and a view that is probably the best in the city. 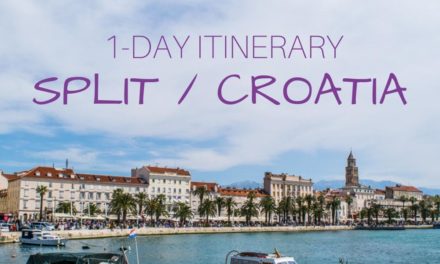 Best Split Itinerary for 1 or 2 Days 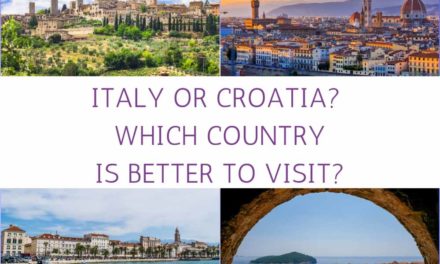 Italy or Croatia? Which Place is Better to Visit? 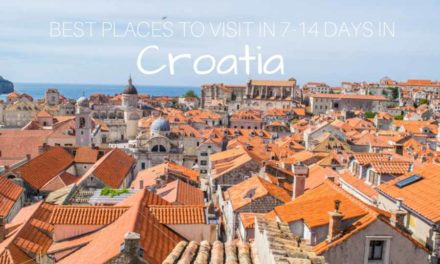 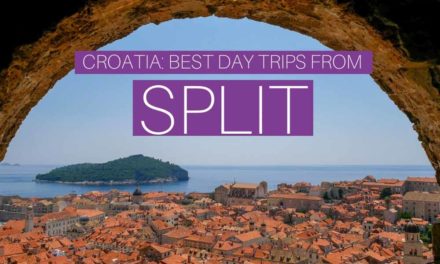